That Time I Stented A Vegan

A whole food, plant-based diet will help you live longer and reduce your risk of heart disease, heart attack, stroke, diabetes, and perhaps some types of cancers.

However, it's not a magic bullet -- just because you eat a vegan diet, this does not mean you are immune from all health ailments.

A couple of years ago, I was consulted on a man in his early 50's with chest pain.  He was concerned enough about the pain to come to the emergency room, but upon talking to me, he was trying to play it off.  "Oh, it's not that bad, I have reflux, I'm okay now."

He's a vegan, he tells me, after watching Forks Over Knives a couple years ago.  He eats a fair amount of restaurant food and certainly likes french fries.  And at that time, I'd classify his body size as modestly overweight.

I wanted to be able to tell him that his heart was fine, but there were a few things that just didn't sit right -- his EKG had some abnormalities that suggested ischemia, or a lack of blood flow to part of his heart.  He had risk factors as well, a family history of heart disease, abnormal cholesterol levels particularly with a low HDL, and high blood pressure.

I ordered an echocardiogram, which is an ultrasound of his heart.  I had the chance to look at it immediately after it was done.  It was quite abnormal.  The front wall of his heart was not moving at all, suggesting an acute plaque that could be sitting in the left anterior descending.

I showed the echocardiogram images to my vegan patient.  He looked on, stunned, as I explained that his chest pain was probably unstable angina.  We planned a coronary angiogram for the following day.

The angiogram demonstrated a severe narrowing of the left anterior descending coronary artery, which is the artery that runs down the front wall of the heart.  I placed a stent to open the artery.  As he was suffering from unstable angina, this is a situation in which placing a stent does save lives. 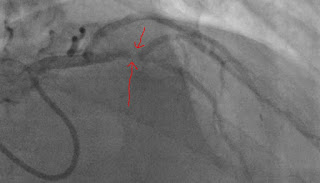 He's doing great now.  He's adopted an Esselstyn-style whole-food plant-based vegan diet.  He's lost a significant amount of weight.  He also exercises regularly.  As a result, he's been able to come off his blood pressure medications.  At present, his only medicines are a baby aspirin and a statin.

So what happened, why did a vegan have an unstable angina event?  He had risk factors for heart disease, which included a family history, high blood pressure and abnormal cholesterol.  Also, while he was a vegan at the time of his event, he had spent most of his life on a standard American diet, and his vegan diet probably wasn't the healthiest.  Remember, Oreos, potato chips, Twizzlers, and Pepsi are all vegan, but they're certainly not health foods.

I believe that with continuing a whole-food plant-based diet and regular exercise that his heart will remain healthy for years to come.
Posted by VeganHeartDoc at 4:26 PM 1 comment: