I've done an Ironman and several half-Ironman distance races.  But I still love small races too.  It's a chance to just go full-steam and give it what I've got.

This is me and my friend Kenny, who was doing his first triathlon today!! 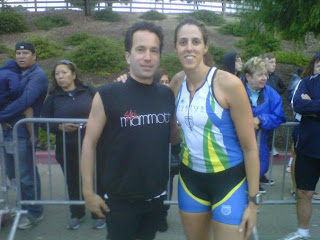 Swim
I decided to take a slightly different strategy on the swim -- start at the front of the wave, go all out on the start, and push myself all the way through.  When the gun went off, there were about a dozen or so women who powered in front of me, but shortly thereafter I think I passed a couple of them as we rounded the first buoy.  On this rectangular course on a man-made lake, sighting the buoys for the turns was not a problem.  Swim time:  10:55 -- a minute and a half faster than the last time I did this race.  I was the fifth woman (out of 33) in my age group out of the water.  I credit my coach Gerardo Barrios with leading an awesome swim workout on Tuesdays and Thursdays and scheduling me to (begrudgingly sometimes) swim 3-4 times per week.

Bike
Not my strength.  Long legs=crappy levers.  That's my excuse.  One woman who finished the swim at the same time that I did went flying away on the bike.  I tried to keep her in sight but she was gone!  The bike had a couple of hills, but most of it was flat, along the roads around the park and over the Hansen Dam.  Two women passed me on the bike.  I was surprised there weren't more people who passed me.  Bike time: 33:22.  Over 3 minutes faster than my 36:43 of two years ago.

Run
There's an important rule in triathlon -- Never try anything new on race day.  Which would suggest that maybe I shouldn't have decided to try running without socks.  I figured it would take some time off of my second transition.  And it did.  But now I have a couple of blisters in my arches.

In short races, the run is my strength of the three sports.  I managed to catch the woman who flew ahead of me on the bike course.  The run took us through some trails of the Hansen Dam Recreation Center.  Now, the run is supposed to be a 5k, but I measured 3.21 miles on my Garmin.  At water stops, I'd grab a glass of water, take a sip and dump the rest on my head.  There were a few inopportune hills, like the one that is a quarter mile from the finish line.  I powered through that last hill, joked with the guy who I had run the last half of the trail with by yelling, "Don't let yourself get chicked at the finish!" as he, as a result, sprinted to the finish line just ahead of me. 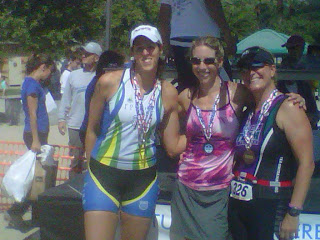 Awards Ceremony -- "Podium"!!!!﻿
Second place (out of 33) in my age group!!!  This would be my first time racing in LA in which I have podiumed in a triathlon in my age group.

So, getting older, getting faster -- a great day at Hansen Dam!!!
Posted by VeganHeartDoc at 7:34 PM