I just returned from the ACC.16, the American College of Cardiology's annual conference, in Chicago.

The last time I attended was back in 2007, when I was an interventional cardiology fellow.  With the incentive of $99 for registration (as opposed to the usual pricetag of hundreds) as a first-time attendee as a practicing physician, I decided, why not!

The conference opened with remarks from the current president of the ACC, Dr. Kim Williams, who happens to be a vegan, and proponent of plant-based diets for heart health.  His opening remarks had a lot of focus on prevention.  It's refreshing to hear talk of prevention at such conferences, because that's where we're lacking.  He talked about traditional diets within some cultures which increase heart risk -- "Don't let your culture hold your heart hostage." 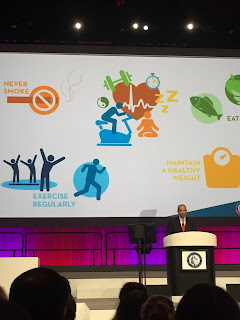 How refreshing to see a focus on prevention!

I saw Dr. Caldwell Esselstyn -- author of Prevent and Reverse Heart disease.  He's one of my heroes.  His research has demonstrated the reversal of even the most severe of coronary disease with a plant-based diet.  On the first morning of the conference, I came running on over to him, like a rock star groupie, introduced myself, and of course took a selfie. 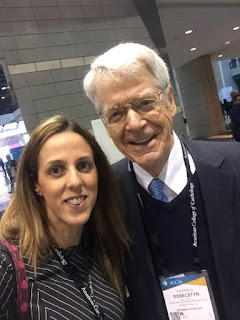 I could have asked for his autograph too.

More on prevention.  In fact there was an entire session, with a packed room, all chairs taken, on prevention.  Maybe the title was catchy: "Lifestyle Medicine: A Little Less Drug, A Little More Sex, and a Lot More Rock and Roll."  On stage were Dr. Esselstyn, Dr. Williams, Dr. Arthur Agatston of the South Beach Diet fame, and Dr. Emilio Ros, proponent of the Mediterranean Diet. 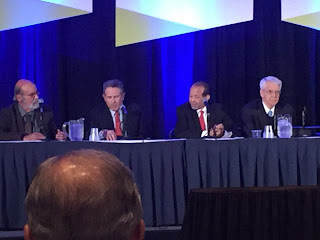 The conversation was good, but I have to say, and maybe I'm a wee bit biased, but Esselstyn hit it out of the park!  He spoke convincingly about the strong benefits of a plant-based diet.  His results demonstrate far greater improvement in cardiac health than South Beach or Mediterranean diets could ever claim.  And, he did his usual, "Eat bok choy Swiss chard kale...." song of vegetables that we should eat, though didn't get as much applause with that as he does at the more vegan-oriented conferences.

Again, rather than the bravado of placing stents through fancy techniques, we talked more about prevention.  Loved it.

Another awesome focus -- women in cardiology.  There was a Women in Cardiology lounge, a great place to network with other women cardiologists, and to refill my coffee.  Did you know that only ten percent of cardiologists are women?  And, of interventional cardiologists, what I do for a living, only four percent of women?  I attended a few sessions here, one on how to use social media to your advantage (psst... follow me on Twitter, I'm @veganheartdoc). 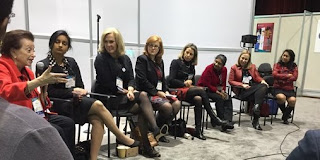 There was even a session on work-life balance.  Being a woman cardiologist has its own unique challenges, from gender bias to making choices regarding family.  I loved these ladies' perspective.

Some important clinical trials were presented.  We now know from the HOPE-3 trial that blood pressure medicines don't benefit intermediate risk patients, but a statin just might.  There is more evidence for use of trans-catheter aortic valve replacement in patients who are not high risk.  Beta-blockers at the time of a heart attack may not be as important as they were in the pre-angioplasty era.  Those patients with a mutation for familial hypercholesterolemia have a much greater risk of heart attack than someone with the same cholesterol level without a mutation.  Rhythm control of atrial fibrillation after cardiothoracic surgery is no better than rate control.

And much more.  It's exciting to be present for the debut of important information that will shape clinical practice for years to come.

I ran into some familiar faces. 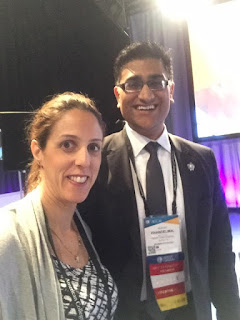 Dr. Akshay Khandelwal, the incoming president president of the Michigan chapter of the ACC.  But I knew him way back when we were interns, and I've been bowling with him before he became really important. 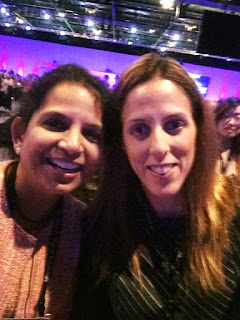 Dr. Shobashalini Chokkalingam, my senior resident from Henry Ford Hospital, smart and funny cardiologist who helped shape my mind as a physician.


And, it's not a trip unless I go running.  I took advantage on the one warm 68 degree day of the trip: 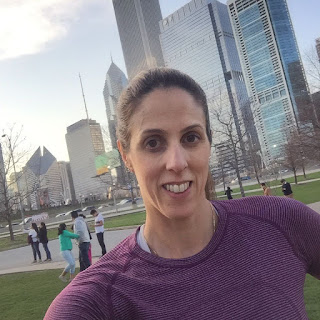 Posted by VeganHeartDoc at 9:12 PM

Interested to read of evidence for use of trans-catheter aortic valve replacement in patients who are not high risk. As a mitral valve prolapse person, I'm wondering if similar evidence is building for trans-catheter mitral valve replacement in similar populations. (I'm not asking for specific advice, just wondering if there is research on this. :) )