It's fun to post about achieving success as an athlete.  But what happens when all that training winds down?

I started in the sport of triathlon in 2005.  With hard work and good coaches, I peaked from 2012-2015.  I worked out twice a day most days, six days a week, long workouts on the weekend.  And I achieved a lot of success -- look back on blog post after blog post about race after race.  And, even though it was hard work, I loved it, the people I've met, the adrenaline rush of racing, great conversations on long bike rides and runs. 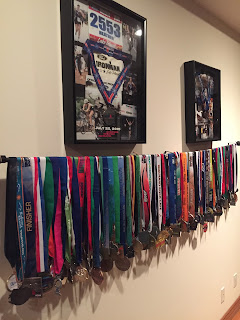 I earned all this good stuff

After Ironman Boulder 2015, for several reasons, a bit of burnout and some other personal stuff, I decided to take a step back from all the hard training.  I certainly didn't become a couch potato, but what I do now is a far cry from back then.

And there are consequences of the decreased training load.  Some are good -- I'm less stressed out because I don't have to worry about fitting in my workouts.  I don't have to figure out how to do a four hour bike ride while remaining within twenty minutes of my car in case someone needs an emergency angioplasty.  And, I have more time for things like sleep and weekend brunch.

But, I'm definitely not as fast, particularly as a runner.  I found that out in a big way when I ran a half marathon in December, hoping for one goal and definitely not achieving it.  And my body has changed.  I'm not heavy, but I certainly don't look as ripped as I do in the photo from the frequently circulated article about me on Forks Over Knives.

There's guilt too -- I'm so used to doing morning and evening workouts, am I really exercising enough if I run in the morning and don't do anything else later?  Or if I decide to sleep in past 5:30 am?  And people still ask, "When's your next Ironman?"  Am I still worthy of the reputation I've gained as the VeganHeartDoc who swims/bikes/runs like crazy?

I had a lot of reasons to tone down my training.  I don't regret it.  I still work out six days a week, but most of the time it's just one workout a day, not two.  I'm training for a marathon at the end of May, the Mountains to Beach Marathon.  Initially I thought my goal for the race would be 4:20, but I may be finishing in the high 4's.  And that's ok.
Posted by VeganHeartDoc at 8:15 PM