Racing for Something More Important

Most races have some sort of cause that it benefits, and often I don't think much about that when I race.

Lawrence Fong is the LA Tri Club's membership director. Not only that, but he's a great friend and athlete, and one of the first friendly faces I encountered as a newcomer to Los Angeles and to the LA Tri Club. 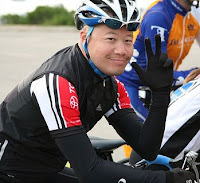 On Wednesday evening, he had a brain bleed, and was found on the ground. He was immediately taken to the hospital, where he underwent emergent surgery to his brain to relieve the pressure. Since then, he is starting to recover and respond to commands, but he has a long recovery ahead of him.

One of Lawrence's passions is racing. He was planning to work as staff for the Eco-Fest 5K. All proceeds raised from this race go to Lawrence and his family.

It was a terrific race. Many club members, including Wayne Fong, Lawrence's 76 year-old father, raced. It was a cross-country course, up and down and zigzagging across a hill, and was pretty challenging.

I had a great race too -- I placed second in my age group and won a cowbell, some socks, sunscreen, a water bottle, and Clif Shot Blox.

For more information about Lawrence Fong and how you can help, click here.
Posted by VeganHeartDoc at 1:24 PM