I went to another Ironman race.  But, this time, unlike in July 2010, I came as a volunteer, not as a participant.

Several members of my Fortius team were racing at Ironman Arizona this weekend.  Twenty-five of us (!) came along to support.  It's a cheap, quick flight from Los Angeles, I was excited to support my team, and it's always been my dream to work in the medical tent for an event like this.

From 10 am - 3 pm, my team worked at the Bike Special Needs station.  Because the race consists of a 112-mile bike ride, many participants might want to have their own special items available, like a specific bottle of sports drink, a sandwich, a spare bike tube, and so forth.  Our whole Fortius volunteer crew -- all 25 or so of us, stood out on Beeline Highway, yelling out race numbers and handing off bags.  Overall, people were grateful (except for one athlete who chose to yell at us for not having his bag available immediately as he whizzed by at 20+ miles per hour). 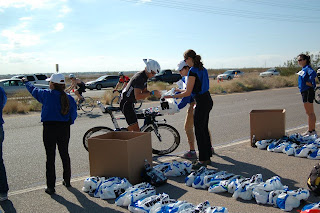 That's me and my teammate Nikki holding an athlete's bag while he finds exactly what he needs.  It's a great feeling to help an athlete during a tough race like this.

For more about the Bike Special Needs volunteer experience, I refer you to my teammate Ryan "the Ironmadman" Schneider's terrific blog.

Following our five hours at Bike Special Needs, I spent a couple hours sitting and relaxing by Tempe Town Lake catching up with an old friend who lives in Arizona while cheering for athletes running by.  Some looked strong, some looked a bit tired, and others appeared completely ragged.  I yelled as loud as I could for my friends who were racing, and yelled for many strangers.  I think they all appreciated the encouragement; I know that I did when I raced Ironman Lake Placid last summer.

Later in the day, I volunteered in the medical tent.  This was a very different experience from what I ever imagined.

The tent was basic -- multiple folding chaiselounges covered in white sheets, with IV poles nearby.  In the middle of the tent was a table covered with basic medical equipment -- IV fluid bags, band aids, stethoscopes, blood pressure cuffs, ibuprofen, acetaminophen, and aspirin.  There was no cardiac monitoring equipment, no anti-nausea medications, no I-Stat machine to check electrolytes.  Just the basics.

Our volunteer team consisted of all sorts.  There was a crew of nurses from one of the local ER's, a paramedic instructor who loved putting in IV's, a smattering of other medical professionals, a very eager aspiring medical student, and a couple of physicians.  I worked alongside a pediatrician, a family practice doc, and a physicians assistant.

I saw a lot of dehydrated athletes.  He or she would come in, propped up by 1 or 2 volunteers, eyes glazed over, pale.  We would obtain vital signs.  Then I'd wander over and introduce myself, "I'm Heather, I'm one of the doctors" (no need for formalities in this setting).  I'd see if they could drink -- broth, Ironman Perform electrolyte drink (which they had been drinking all day long during the race and most laughed if I suggested it), or water.  If they couldn't drink, they'd get an IV.  We'd give up to a liter of normal saline.  If, after that, they were vomiting, or unable to tolerate oral liquids, or if they had been in the tent for over 20 minutes, they were sent via ambulance to the hospital.  In my six hours in the medical tent, I sent three athletes to the hospital.

There are some tough people who race the Ironman.  I think some are too tough for their own good.  One woman, in her late 40's, raced with a stress fracture and some sort of gastrointestinal issue that was requiring an endoscopy the following week.  She was badly dehydrated, and teammates who saw her cross the finish line hunched over looking like she was in terrible pain.  She was racing against the instructions of all of her physicians, and I think she got her Kona slot, but at what cost of tearing apart her body.

Another man, a physician in his 60's, with multiple medical issues including a recent prolonged hospitalization, also raced.  He finished spectacularly, I believe in under 12 hours based on his arrival time in the medical tent.  After a liter of IV fluid, he was doing fine, but should he really have raced that day?

One woman received a liter of fluids and still couldn't keep any liquid down.  I gave her an hour to perk up and then told her we needed to send her to the hospital.  At her request, I went outside to update her husband, who told me that she ended up in the ER dehydrated after last year's Ironman.  What????  If you do something once and you end up in a hospital, should you do it again???

The Ironman is a grueling race, based on the distance covered in one day.  I finished my race last year with a severe tendinitis that kept me from running for two months.  That was nothing compared to some of the stuff I saw during my day in Arizona.  This is an event where one third of all participants require medical attention in one way or another, only 95% finish, and about 100 athletes end up in the hospital.

Is the human body meant to do this?  In addition to the oxidative stress placed on the body from the hours of training and the long race day, there is such a huge potential for injury and illness.

I've sworn in the past that I would never do another Ironman.  However, a part of me has always wondered, if I'm more fit now, could I blow away my finishing time of 14 hours and 45 minutes?  I could.  But, I don't want to destroy my body to do it.  Watching the race has definitely changed my perception.
Posted by VeganHeartDoc at 7:32 PM