I will be making my second annual vegan Passover seder this Friday.  So far, there will be 25 guests at the seder table.  I'll post pictures and tell you all about it once it's done, but in the meantime, here are some previous Passover meals and celebrations: 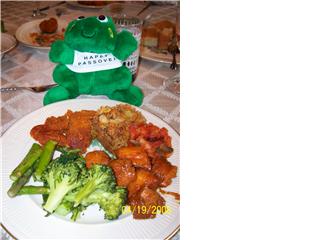 And... why a vegan Pesach isn't that hard.

I went to images.google.com and entered the phrase "vegan passover".  Five of the first 21 pictures that came up were from my blog.  Wow, I think that almost makes me an authority on vegan Pesach!!!
Posted by VeganHeartDoc at 9:18 PM

I am quite new in passover. But I cannot wait to have this one!
Wishing you a happy Passover.
You can take a look at this passover message: goo.gl/lFsMZ on this celebration. Very unique one.

My first Vegan Passover... it will be interesting! Hopefully, I'll get more ideas for next year, so I can put it in a book.

Have a happy Passover!!!