I DNF'ed a marathon.  It's not the end of the world.

I'll chalk it up to burnout and mental distraction, and starting the race too fast, not accounting for the 80 degree weather expected later in the day.  As I prepared for NYC, my sole focus was breaking four hours.  That was my goal, and I should have been more flexible.

On my only other DNF ever, which was the Surf City Marathon in 2009, I scrambled to find another marathon to redeem myself.  And I did.  I posted my best time ever at the time, in my fourth marathon.  That said, I was a nervous wreck, having put so much pressure on myself to finish well so soon after a bad race.

In the first couple days after my most recent DNF, I was a bit sad.  But honestly, I think I'm over it.  I've run 13 marathons.  So what if my attempt at number 14 is a bust?

I've had to refocus -- I've had some great races this season.  Yet, I seem to perseverate on where I've failed, when I've actually had some awesome successes -- I took fourteen minutes off of my Santa Barbara Long Course race at the end of August, had a great day at Age Group Nationals, and qualified for Age Group Nationals for the second year in a row by placing in the top ten percent of my age group at the Malibu Classic race in September.

I didn't blog about those accomplishments.  Yet I am not hesitant to overanalyze where I've screwed up.

Next up is the North Face 50K on December 1.  That will be my first ultramarathon, at just over 31 miles. 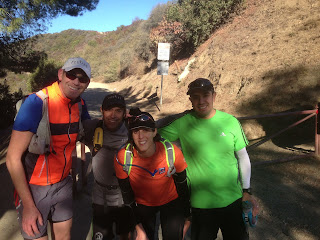 Me and teammates Evan, Ray, and Alex, at Westridge Trail on Sunday morning

Yes it's more running.  But, trails are so different from roads.  I ran 27 miles of trails this weekend, and I'm not sore.  If' I'd done that on roads, I'd feel quite differently.  And, an ultramarathon, while longer than a marathon, has less pressure.  Or at least I put less pressure on myself.  My goal is to finish so I can call myself an ultramarathoner.

After North Face, I am taking a much-needed hiatus.  It might be a month, it might be longer.  While I do not plan on sinking into my couch and scarfing down vegan bon-bons, I will exercise when I feel like it, without a schedule, without a coach to report to, for the first time in about two years.

And, after my hiatus, I'll come back and figure out what I want to accomplish as an athlete next year.
Posted by VeganHeartDoc at 9:42 PM

Hi, nice site, very informative. Would you please consider adding a link to my website on your page. We are happy to offer you a 10% discount to our Online Store if you do so. Please email me back and I would be happy to give you our link.