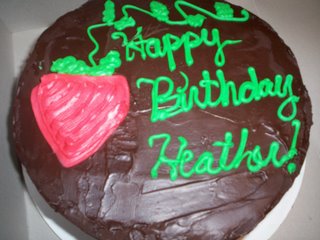 Another year...... and really, it's been an insane year. Thirty was a hard year in many ways, but in other ways it was very good, and I like to think that in the long run it's made me a better, stronger person.

This cake was made by Theresa of Sweet T's Bakery. I don't think she has a storefront, but she bakes delicoius brownies that are sold at TJ Scallywaggles in Allston. I'll be sampling this cake later, and if it's good, I'll be raving about it here.
Posted by VeganHeartDoc at 12:05 PM

I hope your cake was yummy and that a good time was had by all!

it made you a stronger person..that i know for a fact.. it has been a rough growing year...

Happy Birthday!!! I hope you won't be eating that cake alone!

First of- HAPPY BDAY
Second- SAMPLING? more like scarfing it down :)

hope you liked it

Wishing you a wonderful year ahead filled with all your best dreams coming true.

I hope things go your way in all the ways you want it to!

Happy B'day. What a cute cake.

Oh and congrats on #1 at the Hale race. That is an awesome way to end the season.

I like to hike at Caryl State Park which is part of the Hale reservation.

Hope you had a wonderful birthday.

Better late than never : Happy Birthday Heather ! I wish you health, joy and hapiness for the coming year and beyond :)

I know I'm REAAAAALLLY late with this but, better late than never, right?

I hope this year is everything you want it to be -- you deserve nothing but good luck & happiness.

I'm happy we're still in touch even so many moons past good ol' DCD.