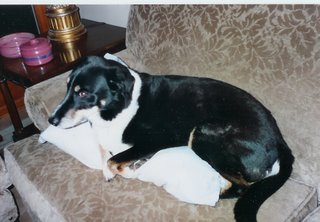 Back in high school, my brother really wanted a dog. I didn't -- I thought dogs were too much effort. Kevin picked out Melissa from our local Humane Society shelter. She was a hyper little girl at first, and we all grew to love her. Her birthdays were celebrated at Taco Bell and Dairy Queen. Ok, they weren't celebrated in those restaurants, but we'd all get in the car and go for a drive to get dinner for us and her.

She mellowed out as she got older. Then, at age 9, she was found to have a mass in her spleen. We were told it was probably cancer and that she would die soon. Her spleen was removed urgently, the mass was no more than a bruise, and she recovered. A year later, she was diagnosed with kidney failure and her body nearly shut down. With medications, lots of loving care, and occasional fluid injections, she was nursed back to health, and lived a happy three more years.

As the years passed, her hearing and vision deteriorated. Her joints became sore. She still wagged her tail for us, but she slowed down quite a bit. Today, my parents came home to find that she had passed away.

Dogs are wonderful creatures, full of personality, and give us unconditional love. Melissa was a part of our family, and she will be forever missed.
Posted by VeganHeartDoc at 4:47 PM

I'm so sorry for your loss. She was a handsome girl.

So sorry:( That was a really nice blog memorial. Hope you and your parents are doing ok.

I'm glad she had such a long and happy life with your family. I remember Melissa from her hyper days--it's hard for me to think of her slowing down.

Please give my best to your parents; it's hard coming home to a quiet house once you're used to being greeted by a puppy--and in my mind, they're puppies forever, no matter how old they get.

Poor pooch! What a sweet dog.

So sad to hear it. Dogs can bring so much to our lives.

I'm very sorry to hear of your families loss. You're in my thoughts and prayers!

We've all been through losing a loved one and a dog is a friend - and often so much more than just a friend!

So glad to know Melissa was loved for as long as she was in this world.

Just so you know, this was truly a very nice way to memorialize her...