Every so often I bake 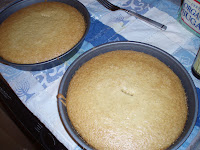 The occasion was my brother's 30th birthday party. I made a vanilla cake with vanilla frosting. 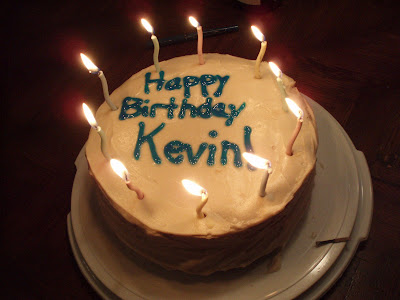 Seriously, though, my lack of time in the kitchen has become quite sad. I used to love cooking. Now it just doesn't thrill me. I'm busy with work and tri training and when I get home, exhausted and hungry, all I want to do is eat something quick and easy. Honestly, it's not always something incredibly healthy. For example, microwaved frozen gyoza dumplings and microwaved soup-in-a-box make for a yummy dinner, are somewhat nutritious but a little generous with the sodium.

I've decided to order food from a delivery service. I am trying Vegin' Out. They deliver a week's worth of dinners. For a week's worth of food for a single person and delivery, the cost is $110. To me, that's well worth it if it cuts down my grocery shopping and time in the kitchen.

0.5 mile swim, 18 mile bike, 4 mile run. Several celebrities, though I can't say I saw and identified a single one. Lots of cameras and paparazzi.

I have nothing exciting to tell about this race, other than that I just felt good doing it. The course was all familiar territory to me. I've ridden that bike course on every other Saturday since March, and I've swam and run at Zuma Beach a few times. So I felt like I had an advantage.

My next two races are Pumpkinman Sprint Triathlon on October 18 and Soma Half Ironman on October 26. I could use a break from racing, but I know that over the next few weeks my training is really going to ramp up. I look forward to the challenge.
Posted by VeganHeartDoc at 7:51 PM No comments: 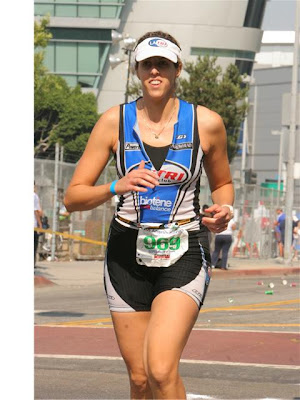 This was a tough one. I finished in 3 hours and 23 minutes. This is ten minutes faster than last year and on a tougher bike course.

Usually, I show up alone, and maybe see one or two people that I know on the course, and will cheer on anyone with an LA Tri Club jersey. This time, though, I got to race with a friend, which was nice. Not only that, now that I have lived in Los Angeles for over a year, I knew a few people who were racing and on the sidelines. Without those friendly faces, this would have been a much tougher race.

The swim was at Venice Beach. All 200 women doing the olympic distance course started at the same time. There were lots of limbs and elbows, especially at the first buoy. I seemed to drift to the outside on the swim, which maybe was good because that means I didn't have as many limbs to deal with.

Out of the water onto the bike. We rode from Venice Beach to Downtown LA. Venice Blvd to Fairfax to Wilshire to Highland to 6th Street to Alvarado (with a couple BIG hills) to Sunset (more hills!), turning around on Sunset just after Kaiser Permanente Hospital, and then into Downtown.

Then on to the run! I got my shoes on, stopped in the port-o-potty for about twenty seconds and headed for my 10K. The run was an out-and-back couse that we had to run twice. There was a HUGE hill, heading up toward the Disney Concert Hall. I couldn't run it, and even power-walking the hill my heart rate was 179! I saw my buddy near the top of the hill, which inspired me to run the last little portion of it. Then I ran down, which felt good, then headed for the turnaround to do it all over again.

I headed back up the hill for the second time, and was just absolutely beat! At the top, someone starts running toward me yelling my name -- it was Hans my spinning instructor! What on earth....? He started running with me! It was great to have his encouragement because I was tired out. I think I ran faster with him. Then we got to the water station, where there was no water. No water?!?! Luckily, Hans had an extra bottle of water which he handed to me. I was so incredibly grateful.

It was a tough race, and great to see that I've gotten faster over the past year.
Posted by VeganHeartDoc at 6:48 PM 4 comments:

Yes I Still Can Cook! 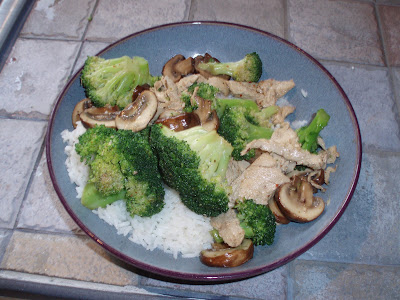 I used to cook a lot, and you can see that in my earlier blog posts. But, living alone, working more than full time, and training for triathlons, I'm just not inspired to cook nearly as often.

Here's a simple creation: A teriyaki stir fry with broccoli, baby portobella mushrooms and Trader Joe's Chik'n Strips made from soy protein, on a bed of jasmine rice.