Two weekends ago, I completed the Valley Crest Half Marathon, 13.1 miles of running with 1800 or so feet of climbing.  My finishing time was about 2:13.  I'd run a flat marathon quite a bit faster, but this was a good challenge. 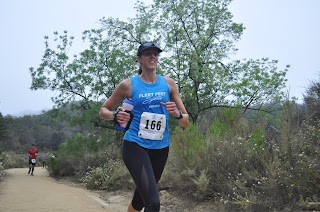 Running in the Santa Monica Mountains can be tough, but the scenery is awesome.

This past weekend, I competed at the Big Bear Triathlon.  This was the first Big Bear Tri, and the race director is the cousin of one of my team's coaches.  I had a great time, but someone forgot to measure the course.  The swim was 1.3 miles instead of the pre-stated 0.93 miles.  We were told the bike would be long at 28 miles due to lack of an adequate turn-around point, but it came out to more like 31 miles.  So by the time I got to the run, I thought to myself, I know this is supposed to be 6.2 miles, but I am emotionally ready to run 8 if that's what the course is. 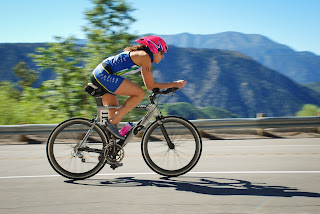 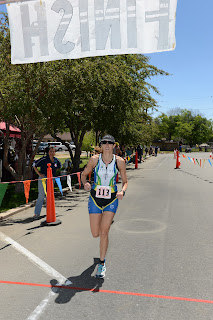 And that's the finish line.

It's hard to believe, but I leave for Israel in less than four weeks -- on July 16!!!  I'm still training hard.  Today started just before 5 am, with a swim from 6-7 am, a full work day, and then a 90 minute brick in the evening.  Tomorrow I'll be at the ocean at 6:15 am to do it all over again.  Some days are tough, but this is what makes us athletes.

Posted by VeganHeartDoc at 9:54 PM No comments:

The vegan diet has caught on.  People have read T. Colin Campbell's The China Study, Caldwell Esselstyn's Prevent and Reverse Heart Disease, and have seen the movie Forks Over Knives.

I'm seeing a lot of patients who have recently gone vegan for health reasons.  Some are getting amazing results, cholesterol plummeting, weight coming off, blood pressure normalizing.  But, others aren't necessarily seeing results -- their blood pressures are still high, cholesterol is no better, and weight won't budge.

The answer is usually found in the details of their vegan diet.  One patient told me how after his heart attack, he went fully plant-based, and he had great results.  But, after a couple years, the cholesterol numbers started creeping up.  As it turns out, his initial whole-food plant-based diet had slid into a fair amount of processed mock-meats (Morningstar, Boca, Tofurky, etc), oil, and other processed foods.

Another common theme amongst my vegan patients who struggle with weight, blood pressure, and cholesterol -- restaurant food.  It's fun to try out the local vegan and vegetarian restaurants.  But just like most omnivorous restaurants, they're not geared toward a healthy diet.  Your local vegetarian restaurant will add the salt, processed sugar, and oil to your food like any other restaurant.  And vegan baked goodies like cookies and cakes -- forget them!  They're no better for your health than the animal-product-laden versions. 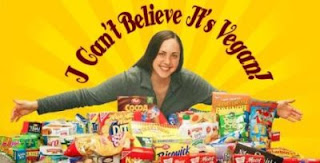 These items may all be vegan, but the vast majority of them are NOT healthy.

The diets that are touted by Esselstyn, Ornish, Furman, and Campbell are not VEGAN diets -- they are whole-food, plant-based diets.  So, get to the basics -- get most of your calories from fruits and vegetables, add whole grains like brown rice and quinoa, and use proteins that are unprocessed like beans, lentils, and edamae, or minimally processed protein like tofu.
Posted by VeganHeartDoc at 9:36 PM 2 comments:

This summer, I will be competing at the Maccabi Games in Israel.  The games take place from July 17-30, and I am the captain of the Masters Triathlon Team, consisting of triathletes ages 35 and up.

I will be competing in the triathlon against other women in my age category.  In addition, there is a competition called the "Maccabi Man/Woman".  That involves four events:
July 21-- Bike 40K time trial race
July 23 -- Half marathon (13.1 miles)
July 26 -- Olympic distance triathlon (0.9 mile swim, 24 mile bike, 6.2 mile run)
July 28 -- Open water 5K swim
The athlete in each division with the lowest combined total time for all four events can win a medal as the "Maccabi Man or Woman".

So, that's four events in eight days!!  My initial concern, and still a concern, is that the half marathon could leave me fatigued before a triathlon three days later.  But, if I'm going to Israel to be an athlete, I want to do everything offered, even something as challenging as this.

I discussed with my coach Gerardo, thinking he would try to dissuade me from trying to attempt this.  But, surprisingly, he felt quite positively about it.  So, to train to compete in four events scheduled so closely together, I will racing four weekends of back-to-back-to-back-to-back events.  This should simulate the fatigue of competing in the Maccabi Man/Woman Competition.

Last weekend, on May 26, I ran the Mountains 2 Beach Half Marathon in Ventura: 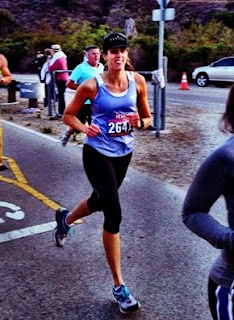 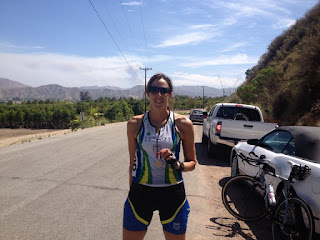 I finished in 1:18:45.  By no means is that a champion time, as I've never been a strong cyclist.  But, I set a goal for myself to finish in 1:20 or less.  I feel like I pushed myself hard, and finished the second half of the race just as fast as the first half, which means I paced myself well.  The medal that I am holding is for second place.... out of the two women who raced today.  It's a medal, I'll take it :)

Next weekend on June 9, I will be racing the Valley Crest Half Marathon, a hilly local trail marathon through the trails of the Santa Monica Mountains.

My final race of the four, the Big Bear Olympic Distance Triathlon, will take place on June 15.

So far, two of the four events have been completed.  I'm trying to recover between events.  I am  focusing on getting enough sleep, and taking in good nutrition to facilitate my recovery.

If I can get through these four weekends of races, then I think I should be able to do Maccabi Man/Woman.

Posted by VeganHeartDoc at 7:21 PM No comments: