I have a new friend to carry around with  me at work -- my laptop computer.

For about the past month, I have been on the electronic medical record.  Rather than dictate my notes to a bank of transcriptionists in India, I type them.  Actually, it's more of a point-and-click system, but for many aspects of the note, I prefer to type.

On the first day using the electronic medical record, I wanted to crawl under my desk and hide.  My orientation had been at least four months earlier, and the technical support person on site was clueless -- I'd ask him a question, he'd stare blankly at the computer and tell me that he's "not familiar with this template"

The first few weeks of EMR (electronic medical record) were beyond painful.  At first, it took me far longer to complete a patient visit.  But, now I think it's faster than the previous paper charting.  I don't have to write prescriptions because if the patient's pharmacy is in my computer, I can fax a prescription right from the exam room.  As a patient talks, while I used to write down notes, I can type my notes, which don't need to be subsequently dictated because they are being typed directly into the EMR system.  And, rather than have a pile of charts waiting for me to dictate them at the end of clinic, it's easy enough to finish off a patient note at the end of the encounter with a patient.

While I enjoy the technology, I don't want to take anything away from the personal interaction with my patients.  I try to set up my computer so that it is not directly in the line of eye contact between me and my patient, and so I angle myself toward my patient, and slightly away from my computer.  I have had to learn how to balance the entry of data with making eye contact with my patients, and try to minimize the number of moments of awkward silence while I try to find the right place to point and click.


So, if you have an appointment with me, and you see me in the room with the laptop computer, please know that even though I may be typing, and pointing and clicking, I am listening.  Really.
Posted by VeganHeartDoc at 9:57 AM 6 comments:

I've been suffering from a lack of confidence in my running lately..

Of my last three running events, two were terrible.  Long Beach Half Marathon was run as I was recovering from a stomach bug and I had the opportunity to meet the medical staff as I nearly passed out after the race.  Then, my performance at the Santa Barbara Marathon was dismal after having to skip the marathon that I had wanted to run the week before (Santa Clarita) due to a sinus infection.  I rarely get sick, so to get derailed from two races back to back was unexpected and disheartening.  Boney Mountain Half Marathon was a good race for me, but as I had never done a trail race before, I had nothing to compare it to.

So, heading into Pasadena Rock N Roll Half-Marathon this weekend, I was a bit apprehensive.  Having decided to dedicate the coming year to becoming a stronger runner, I wanted to prove that in a race I really have gotten better.  In order to run faster, I have been following Coach Gerardo's running plan, got back to my track workouts with the Los Feliz Flyers on Wednesday evenings, and have accelerated my usual winter weight loss of excess pounds that I tend to gain in the Fall "off-season".

So, better trained and leaner, I approached the start line.  I started with my friend Tom, who I've done several long runs with.  But, knowing he's a faster runner, I let him go at the beginning.

One of the runners in front of me had a shirt with a picture of a pork sandwich and the words "Runs on Bacon".  At that point, I had two thoughts:  1) It's a shame I don't carry business cards with me when I run because this is a man who just might need me in the future, and 2) I cannot let a man who gloats about his love of bacon to beat me.  So I passed him.  :)

Coach Gerardo gave me a plan of what paces to keep, to gradually get faster throughout the race.  This was going to be tough to stick to since there are so many hills in Pasadena.  However, it became a moot point when somewhere in the first mile my watch broke and for my pace displayed "3:00" per mile.  I was a bit panicked by this, but I thought back to my track workout this past Wednesday, where as a pre-race workout I ran three 8:30 miles with a short rest in between, to give me an idea of how I would feel on race day.

Miles 1-2 had some significant uphills.  I started feeling good around mile 3, which is where I spotted my Dad on the course.  It's rare that someone comes out to a race just to support me, so it felt good to see a familiar face.  Miles 4-6 were a little too fast, averaging 8:30 per mile, but I felt good.  I slowed a bit during miles 7-9, maybe to 9:00/mile.  Then I picked it up a bit, and as we ran the last loop around the Rose Bowl and the golf course, I charged it into full gear, huffing and puffing.

Ten more minutes of pain for the confidence gained from a well-run race.

This is exactly what I needed to give me confidence heading into the LA Marathon next month. 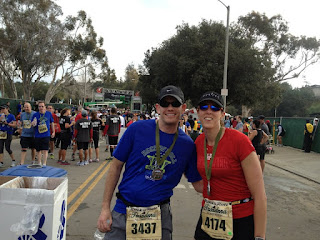 Me and Tom Ackerman, friend and long-run training partner.
Posted by VeganHeartDoc at 9:47 PM 1 comment: