Nine and a half years a vegan!

Hard to believe it's been that long since March 2005, when I paced the Strong Memorial Hospital cafeteria my first night as a vegan looking for what vegan thing I could eat for dinner and settled for a peanut butter and jelly sandwich.

From my own trials and mistakes, here's what I've learned:

1) It's not just about eliminating animal products.  It's about including new foods.

It is hard to stick with something when the approach is "these are the things I cannot eat."  But rather, it should be a journey of finding what you CAN eat!  Try new foods.  Have you ever had quinoa?  Baked tofu?  Seitan (not pronounced like the devil, but rather say-TAN)?

In spite of your best efforts, you are going to eat something that isn't strictly vegan.  It happens.  I was at an event a few months ago and was noshing on some delicious crackers, and after the fact I found out that one of the top ingredients, to my dismay, was milk.  Whoops.  I didn't drop dead from eating the dairy-laced crackers.  But now I know, if I see those crackers, I won't eat them again.

If a food has meat, dairy, or eggs in it, clearly it's out of the question.  What about "natural flavor"?  Or sugar, which is usually processed with bone char?  Or most varieties of wine, which are clarified with fish gills, unless you get organic or kosher wine?  Is that lecithin from animal or plant sources?  Was that veggie burger cooked next to a meat burger?

I'm getting a headache thinking about all these minutia.  When you drove your car today, you probably ran over a few ants and a few mosquitoes splattered on your windshield.  Get over the details or you'll drive yourself crazy.

4) It's vegan.  It's not gluten-free, oil-free, paleo, grain-free, additive-free, completely unprocessed, salt-free, strictly organic, nut-free, and so forth.

There have been a few prominent vegan bloggers who got so bogged down in eating so perfectly that their health became compromised and they decided they could no longer follow a vegan diet.  I can understand why a person with heart disease might choose Esselstyn's oil-free, nut-free diet, because it does reverse heart disease, but for most of us who don't have coronary disease we don't need to be so restrictive.

In my own diet choices, I aim for a whole-food plant-based diet.  I do eat some processed foods every so often.  Today I didn't have long for lunch, so I heated up a Tofurky Turk'y Broccoli Cheddar Pocket.  The "Cheddar" is non-dairy, of course, and the "Turk'y" wasn't made of turkeys, as you might imagine.  And every so often, for a special occasion, I may have a vegan cupcake (I love animals too much to eat a non-vegan cupcake).  Or if I'm driving through Las Vegas I will have an apple fritter from Ronald's Donuts.  I eat well most of the time, but I'm not perfect.

If my diet were perfect, I don't think I'd be very happy.

If you want to know why I'm vegan, I'll tell you why as simply as I can -- because I see the consequences of animal foods on peoples' health on a daily basis, and because I love animals and am horrified by how animals become food.  I will leave it at that, and if you want to know more, I"ll tell you more.  I think that if most people were aware of the details of how their slice of cheese or their chicken sandwich came to be, they would be horrified and disgusted.

I've been an influence for several people who chose veganism, and they come to that conclusion on their own, not because they were shamed or prodded.

6) Have a sense of humor

An animal rights activist once asked me, "What are your thoughts on the relationship of humans and dogs?"  I thought it was a bizarre question, and my response was that they taste delicious with ketchup and mustard.  Clearly I don't eat dog meat, as I am the proud owner of two adorable greyhounds, but the person who asked the question didn't think that was too funny.  Oh well.

Or, people make silly comments that aren't meant to be a serious dig at veganism.  And their response should be equally silly.  "You know plants have feelings?"  "Yes, I hate plants.  I'm going to murder a bunch of plants for dinner and have salad."

7) Sure!  I'll come to your birthday dinner at Morton's.

But you better come to my birthday dinner at Vinh Loi Tofu.

Any reasonable restaurant will make you a vegan meal.  It may not be the most scrumptious thing you've ever eaten, but they'll come up with something.  A chef at Morton's once made me a delicious tower of pasta and vegetables with a marinara sauce.  Another steak house brought me a plate of plain steamed vegetables and I begged for some soy sauce on the side to give them some flavor.

There's the joke, "How do you know who the vegan in the room is?  Don't worry, she'll tell you!"  That's me. I feel great, I'm healthy, I'm a triathlete.  And I feel amazing, thanks much in part to how I eat.
Posted by VeganHeartDoc at 10:39 PM 4 comments:

I came into the race with high expectations.  At St George 70.3 in May, I had the race of my life.  In spite of a run fitness that was sub-par due to a foot fracture just 5 months before the race, I finished my fastest 70.3 by 18 minutes on a hot 90+ degree day and a very hilly course.

While St. George proved I am quite good at riding hills, my speed on the flats needed improvement.  So, in the 2 months leading up to Vineman, my coach gave me bike workouts that were on flats with 10-20 minute bursts of zone 3-4 riding, pushing the pace for those intervals to make me a faster cyclist.  And I was fairly consistent in doing weekly track workouts to bring my run back up to where it had been before I broke my foot in December.

Swim
I had a side bet with one of my teammates that involved a shot of tequila, so I had extra incentive to swim fast.  It wasn't a very crowded swim, and I eased into the out-and-back without difficulty.  The Russian River was quite shallow, more so than usual in the current drought in California, but even in two feet of water, I continued to swim, and not stand up.  Standing up would have slowed me down.  It was an odd feeling as my hand would hit the bottom of the lake on several strokes. That said, a couple people who were dolphin-diving, in other words, standing up, diving, standing up again, and so forth, passed me.

I had a heck of a time pulling my arms out of my wetsuit.  Next time I swim in open water, I think I'm going to put BodyGlide on my wrists and see if that helps to pull the wetsuit off.

Bike
The bike portion of my race fell apart at a few places.  Coming out of the first transition, my bike front wheel didn't seem to be moving very well.  Instead of immediately mounting my bike, I pulled off to the side to take a quick look and make sure nothing serious mechanically was wrong with it.  Fortunately, it was just some mud, and in the first several hundred feet the mud came off my front tire.  Then between miles 8 and 12, my bike tool kit, which contains spare tubes, tire levers CO2, etc, fell off my bike not once but TWICE, requiring me to pull off the course, dismount my bike, get the components that had flown onto the road, and pack in back up.  Ultimately, I threw the loose components into my pockets, and fortunately without the CO2 cartridges jostling around the kit stayed in place.  Then my chain came off around mile 24 and I dismounted the bike again and quickly put the chain back on. My hydration was a bottle of half coconut water and half water (the other bottle fell off the bike), and about half of another water bottle.  So, over 56 miles, I only drank about 30 ounces, probably not enough.  The rest of my nutrition consisted of medjool dates that I packed from home and the Bonk Breaker bars on the course.

In spite of these various nuisances, and two bathroom breaks, I averaged 18.3 miles per hour over the 56 miles, for a time of 3:03, a little slower than my goal of 2:55, but still okay.

Run
I felt amazing starting the run!  Temperatures were still moderate, and the first two miles were each run in about 8:20 apiece.  My strategy, which I stuck to, was to walk through the aid stations, drinking at each station, and run everything else, including hills.  I knew that I hadn't drank enough on the bike, so I had to be sure to drink the electrolyte solution, which was Ironman Perform.  It's not my favorite tasting drink, but it's effective.

Then the heat hit, and my pace slowed.  By mile 10, my legs felt heavy and it took everything in me just to keep running.  Around mile 11, I decided to stop looking at my watch because I was so fed up.  What was wrong -- not enough hydration?  Was yesterday's delicious vegan scone a bad idea?  Was I on my feet too much yesterday?  While I felt like I had come to a crawl, my run averaged out at 9:21 per mile, with a time of 2:02, only two minutes off from my goal. 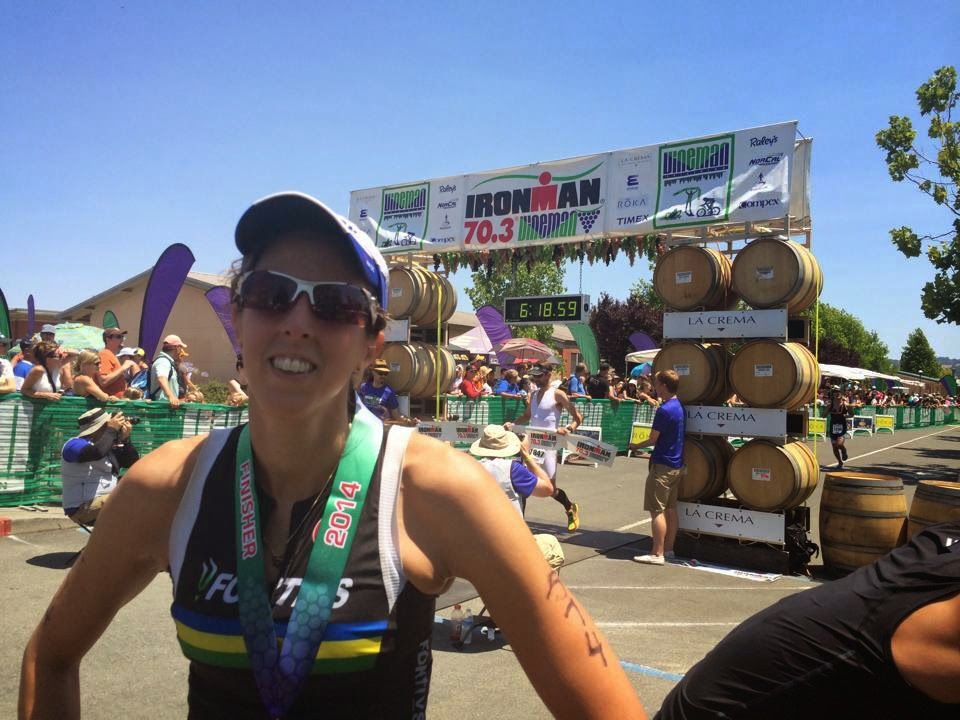 The grand finish
I finished in 5:54.  That was a bit off from my goal, but three years ago I did this race in cooler conditions and finished in 6:27.  So, I had my personal best on this course by 33 minutes, and my personal best at the 70.3 distance by 15 minutes.  At 35 out of 137 women in my age group, I placed in the top quartile.

My amazing teammates and friends. 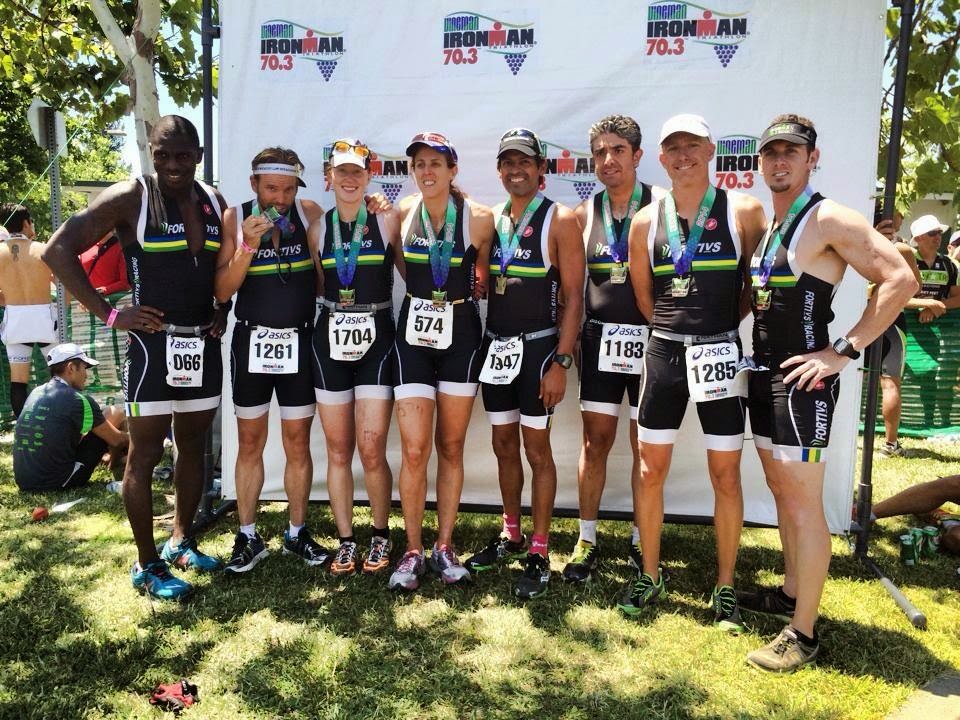 Lessons Learned
--Secure the flat kit.  Really really secure it tightly.
--Hydrate better on the bike
--Get the wetsuit off faster!!!  BodyGlide on wrists before the swim?
I think that's it.  For the most part, a well-executed race on a hot day.

Posted by VeganHeartDoc at 10:44 PM No comments: