I have finally joined the twenty-first century, by ditching my old Blackberry and acquiring an Iphone.

Here are a couple of my favorite fitness and heart-health related apps.  And they're all free.

Free application that allows you to track your weight, food intake, and exercise.  You can input your current weight, your goal weight, and you will see how many calories you can consume during the day to meet that goal.  The food database is extensive -- for example, the Bolani specialty products that I buy from the farmers' market every week are in there.  You can also scan a bar code for a packaged food, and the program will automatically pull up nutritional information.  In addition, you can add your own recipes, such as my usual green smoothie, so that I don't have to manually add almond milk, maca powder, half a banana, a cup of spinach, frozen mango, carrots, and celery every time I make the smoothie.

You can even have "friends" on MyFitnessPal, and can see their progress and encourage them in their efforts.

A free pedometer for your Iphone!   I like it more for curiousity than to force me to exercise, because I'm pretty self-motivated when it comes to that.  The app gives you various walking challenges to encourage you to walk more.

There are other great apps, I'm sure, but these are the two that I use for now.  I have a patient who uses his Iphone to monitor his pulse, but I'm not sure which app he uses.  Any recommendations? 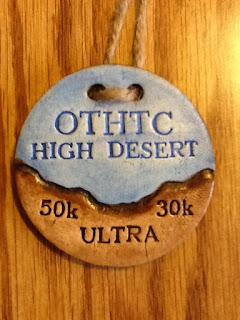 Now, I had fun.  I can call myself an ultra-marathonner (I think I said "ultraman" in the second video clip, but the brain does funny things when you're running and talking, so I misspoke).  I'll put it in the header of my blog, because I am an ultra-marathonner, just like I'm an Ironman.  One and done.  Don't necessarily plan to do another.  But, if I did, I just might come back to Ridgecrest.  A small town race with a very friendly vibe.  Hopefully, the wind won't return for next year's racers.
Posted by VeganHeartDoc at 8:52 PM No comments: