Does work count as exercise?

I ask all my patients if they exercise.  It's an important question since exercise is so important for cardiovascular health.

A common answer:  "I exercise at work."

Unless you are a bicycle delivery person who covers large distances or a valet car attendant who spends most of your shift running to retrieve cars, it doesn't count.  Construction and manual labor don't really count either, since those jobs involve short bursts of lifting or exertion as opposed to a sustained effort.

Granted, a job that has you moving on your feet is far better than a desk job in terms of promoting heart health.  However, for true cardiovascular benefit, you should be doing something outside of your daily work that involves a sustained effort, preferably for at least thirty minutes on most days of the week.
Posted by VeganHeartDoc at 9:04 PM 3 comments: 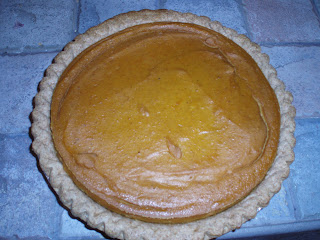 I baked this from a recipe from Vegweb.  It's a whole wheat crust, which I bought from the store, and a filling made from pumpkin puree, maple syrup, cornstarch, silken tofu, nutmeg, and cinnamon.  I'll be serving it up with Soyatoo whipped cream.

Happy Thanksgiving!!!
Posted by VeganHeartDoc at 10:20 PM No comments:

This is a similar, easy recipe to the one from a week earlier. 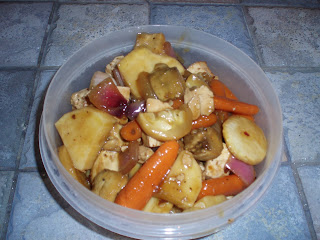 Chop up some veggies and extra-firm tofu.  The veggies in here are eggplant, carrots, squash, sweet potato, and onions.  Add teriyaki sauce.  Mix it up, cover with foil, and bake for 40 minutes at 400 degrees.
Posted by VeganHeartDoc at 7:19 PM No comments: 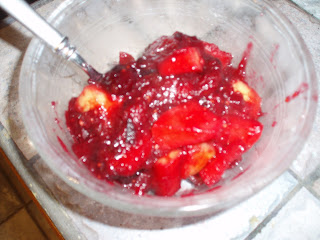 A less sugary, lower-calorie, easy version of a Thanksgiving favorite.  I concocted this on my own to make sure it tasted good before subjecting my family to my cooking.

1 bag of cranberries, 1/2 cup of orange juice, 1 large sliced apple, and 1 1/2 tablespoons of agave nectar.  Heat it in a saucepan for about thirty minutes, until the cranberries all burst.
Posted by VeganHeartDoc at 8:55 PM 2 comments:

I've been coach-less for three weeks and doing mostly what I want for exercise.

Needless to say, I didn't qualify for Boston.  However, I am proud to say that in the course of eighteen months that I cut my marathon time down from 4:57 to 4:12.  I'm proud to say that through much effort and good coaching that I'm a better runner.  One day I'll qualify for Boston, it just won't be this year, or likely next year since I'll be shifting my focus to Ironman training.

However, I decided to run the CIM Marathon after all.  I'm already signed up and I love doing long training runs, so I'm going to just do it.

Another thing I've noticed with less exercise is that I can't get away with eating quite as much.  In peak training for my 70.3 (half-Ironman distance) races, I could easily maintain my weight on 2700-2800 calories per day.  Now, doing only about an hour of cardio 5-6 days per week and two days of weights, it's more like 2400 calories per day.

I feel great.  Relaxed.  Eager to start Ironman base training in January.
Posted by VeganHeartDoc at 2:12 PM 1 comment:

I spent a few days in Washington DC last week.  As you can see, it was quite rainy and cold, not at all resembling the weather that we are accustomed to here in Los Angeles. 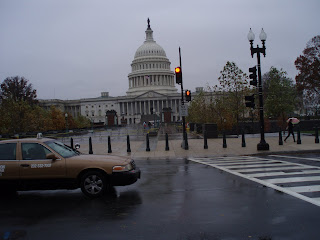 I traveled with a Young Leadership group from the Jewish Federation of Los Angeles.  We went to the White House, Capitol, Supreme Court, State Department, Holocaust Museum, and US Treasury Department. 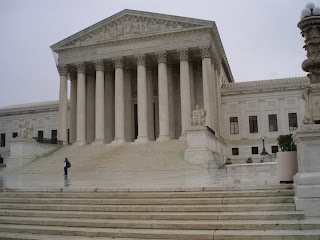 We also had the opportunity to meet with representatives of our members of Congress to discuss a couple of important issues:  hunger in Los Angeles and Iran.

In Los Angeles, one in eight people face hunger every day.  That's a very sad statistic for a wealthy country like ours.  As I discussed in an earlier post, this is the role of the Jewish Federation's Fed Up With Hunger campaign -- to bring attention to hunger locally and to raise funds to combat it.

As a cardiologist, I had the opportunity to give my perspective on hunger:  Those who face hunger are poor and as a result eat unhealthy foods that are high in calories, fat, and sugar, and hence obesity is becoming more and more prevalent, especially amongst the poor.  Obesity leads to high blood pressure, diabetes, abnormal cholesterol, and as a result to heart disease.

Diseases like hypertension and dyslipidemia that once were thought to occur in middle age are being seen in younger and younger people.  I took care of a 25 year-old man with a heart attack and have a handful of patients who are younger than me who have suffered heart attacks.  I see teenagers with high blood pressure, diabetes, and dyslipidemia.

To help to combat obesity, we need to fight hunger by providing healthy options to cheap junk food.
Posted by VeganHeartDoc at 10:02 PM 3 comments: 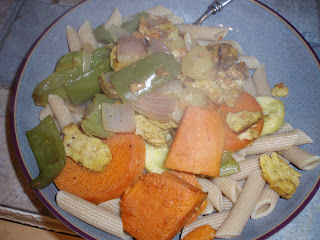 I chopped up some yellow squash, sweet potatoes, a green pepper, red onion, and coconut-flavored tempeh mixed it with some Liquid Bragg's and a little agave nectar and sprinkled with pepper.  I baked this at 400 degrees for about 35 minutes and served it over whole wheat pasta.
Posted by VeganHeartDoc at 7:54 PM 1 comment:

A study in this week's Archives in Internal Medicine (Nov 9, 2009, Vol 169, No 20) looked at the effect on mood and cognition of a low-fat versus a low-carb diet.  Patients on both diets lost the same amount of weight, 14 kilograms.  However, those on the low-fat diet had greater improvements in mood compared to those following a low-carb high-fat diet.

Interestingly, the "low fat" group got 30% of its calories from fat.  I'd call that more of a moderate fat diet, but clearly that diet has less protein and fat than the "low carb" diet.

Why the difference in mood?  Serotonin may be suppressed by a low carbohydrate diet, while it may be upregulated by a lower fat diet.

Thee bottom line:  It doesn't matter what you eat to lose weight.  But, what you do eat in your weight loss obviously has an impact on how you feel.
Posted by VeganHeartDoc at 3:28 PM 2 comments: 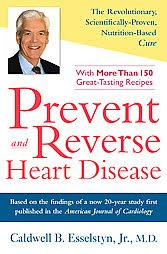 Caldwell Esseltsyn Jr. is a cardiovascular surgeon at the Cleveland Clinic who asked twenty-four patients with severe coronary disease to make radical changes to their diets and follow a low-fat plant-based vegan diet.

The results are incredible.  Through diet alone, these patients were able to halt the progression of their heart disease and save their lives.  It also includes several very simple recipes for low-fat heart-healthy meals and snacks.

As this book demonstrates, diet is so important in heart disease.  This is why I discuss food at just about every patient encounter.

If you're not sure whether you can change your diet to improve your heart health and change your life, read this book!!!

Posted by VeganHeartDoc at 2:51 PM 3 comments:

On my first day of exercising for fun, I ran.

On my second day of exercising for fun, I biked.

Sound like a broken record of a triathle's life?

But, when I went running, I didn't have my GPS or my heart rate monitor.  I just went out and ran up and down a few hills for fun.

And, for my bike ride, someone asked me, "How far are you going?"  Normally, I know exactly how far I need to ride that day.  My answer was, "I don't know, I'm just going up."  It ended up being a fun 15 mile round-trip ride from the LA Zoo up to the Griffith Park Observatory.

Yesterday I tried  a boxing boot camp class.  I hadn't been to a boxing class in a couple of years, so I was a bit rusty with the punches.  However, given my running and triathlon background, I had no trouble keeping up with the class physically. 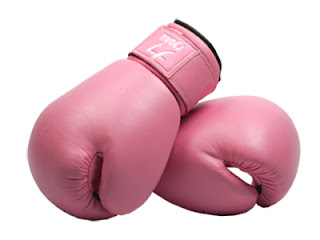 Unfortunately, since boxing uses muscles that we don't use to swim/bike/run, I am still pretty sore. Even taking a deep breath strains a few muscles!
I am enjoying my new exercise program, in spite of the soreness.
Image from blog.mtviggy.com
Posted by VeganHeartDoc at 10:38 PM 3 comments: