I've come a long way from the days when I rode an oversized road bike, my transition bag was a Home Depot orange bucket, and I was happy with 11 minute/mile run splits.

I now have a beautiful Cervelo P2C triathlon bike that fits me, a real transition bag, and the ability to run six miles with sub-9-minute splits. I'm still no superstar, but I've come a long way.

Today's Breath of Life Triathlon is a race that I participated in last year, with a time of 3 hours and 9 minutes. My goal was to beat three hours.

The swim: Cold water, lots of seaweed. Did my usual hyperventilating in the first two minutes, got clocked in the head by another swimmer, found my groove and finished the swim portion in 29 minutes. That's four minutes faster than last year's split, and I have not been working that hard on my swimming. As it so happens, it was a low tide so the swim was shorter.

I ran up to the beach. In front of me were a cluster of men from the previous wave who were walking up to the beach. I dashed between them, running through sand, and in the midst of my dashing and rushing dropped my goggles and swim cap. Whoops!

Transition has gotten faster. Find bike, catch breath, pull off wetsuit, drop helmet and suglasses on ground, put Luna Bar in mouth, pick up sunglasses and put on face, put on helmet, put on bike shoes, double check to make sure I have everything with me, grab bike and run out of transition area.

The bike was nice and flat. With my new (since last season) Cervelo P2C bike, I move faster. I haven't been riding too much since I've been focusing on running. But, I think my average speed was about 17.5 mph, a good mile per hour faster than last year. I still get passed on the bike a lot, but that's ok because I'll pass several of those folks on the run. Not the most beautiful bike course, but mostly flat and fast. Other than losing my water botttle straw from the bottle at the front of the bike (dropping things seems to be a theme today), I felt good about the bike.

After riding into the transition area, I quickly racked the bike, threw on socks then shoes, grabbed 2 Gu gels, my Garmin GPS (to tell me my pace... yeah I'm a geek), visor, and ran out to the run course. The first mile was in 8:15, the second and third in about 8:45, the fourth and fifth more like 9:00-9:15, and the last mile in about 8:15 to finish strong. My calves cramped up and my stomach cramped, but I could keep up my pace. I loved the out-back-out-back run course with the chance to see and cheer on other friends and club members who were racing.

You don't need one. But, I've found that wearing one helps me to see just how hard I'm working when I'm training.

This is my heart rate monitor that I wear on my wrist: 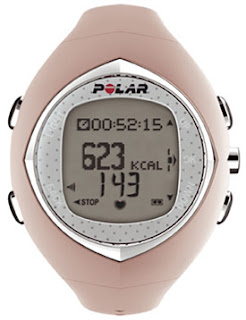 And this is the strap that is worn around the chest: 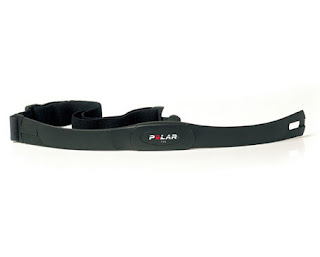 For an aerobic workout, to build fitness, you want to aim for 60 to 80% of your predicted maximal heart rate (PMHR). Your PMHR is approximately 220-age.

So, for a 50 year-old person, PMHR is 170 beats per minute. The target range for a workout should be 102-136 beats per minute. You can allow your heart rate to go higher, which would put you into the anaerobic phase, using more glycogen for fuel than fat.
Posted by VeganHeartDoc at 9:54 PM 3 comments:

Exercise is such an important part of health of the mind and body. I mention exercise in just about every office visit. In fact, when I worked in Glendale with a predominantly Armenian patient population, most of whom didn't speak much English (or exercise), I learned the Armenian word for exercise, marzank, to help me get across how important exercise is.

Most guidelines suggest that we should get thirty minutes of exercise most days of the week. However, newer findings suggest that an hour a day is even better. In studies of people who have lost weight and kept it off, most of them exercise for at least an hour most days.

Exercise does not mean that you have to go to a gym. Do something that gets your heart rate up like going for a brisk walk, bicycling, or hiking. Find others, like a spouse or friends, to exercise with to make you more likely to do it.

"I'm too busy" isn't an option. Your body doesn't care that you're an important CEO who doesn't "have time". If I have to wake up at 4:30 am to get in my workout, that's what I do. Even President Obama works out every day, and he's the leader of the free world! If time is an issue, go for a brisk walk for 15 minutes after lunch, then another 15 minutes when you get home.

"But I'm active at my job, I walk all day" -- That's better than having a desk job, but walking at work is not exercise. Cardiovascular exercise involves doing something where you get your heart rate up over an extended period of time.

Now, lace up your shoes, and go for a walk!
Posted by VeganHeartDoc at 2:31 PM 3 comments: 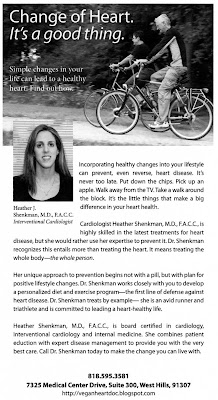 This ad recently appeared in the LA Times and Daily News.
Posted by VeganHeartDoc at 9:05 PM 3 comments:

Soy is all too common a source of protein for vegetarians. So, when I saw this at the Locali store, I had to try it out: 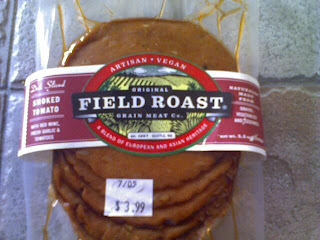 In these Field Roast Smoked Tomato deli slices, the main ingredient is wheat gluten, not soy. Three slices have 110 calories, 13 grams of protein, and only 3 grams of fat, none of which is trans or saturated fat. 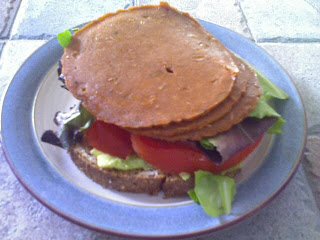 After my long Sunday morning run, I made an open-face sandwich with three slices of Field Roast deli slices, avocado, lettuce, and tomato slices. 280 calories and very filling!
Posted by VeganHeartDoc at 8:39 PM 1 comment:

I love trying new restaurants. While there are plenty of vegetarian restaurants in the Los Angeles area, other than Madeleine Bistro, there aren't many that offer fine dining.

Shojin was a new adventure for a friend and I this evening in Little Tokyo. The restaurant offers vegan, macrobiotic, organic Japanese cuisine. We ordered the special menu, a five course menu of pre-selected items. It came with ponzu seitan (pictured below), a tempura avocado hand roll with soy paper, sea vegetable salad, spaghetti with vegetables, and a fruit tart for dessert.

The food was absolutely delicious and healthy. 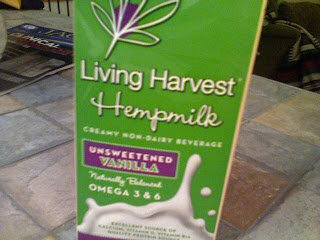 For a change of pace from my usual cereal and soy milk, I just tried hemp milk. One cup of unsweetened hemp milk has 70 calories, 4 grams of protein, and plenty of vitamins and nutrients. It's also a balanced source of omega-3 and omega-6 fatty acids. I purchased this from Whole Foods.
Posted by VeganHeartDoc at 9:43 PM 4 comments: