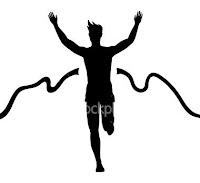 If I've learned anything in my 30's as an athlete, it is to take injuries seriously. If you push through an injury now, it'll only make the recovery and time off from running longer.
A couple of weeks ago at my track workout, I tripped on a shoelace and fell flat on my face. I brushed myself off, tried not to look completely embarrassed, and kept running. My hands were a bit raw from scraping the track, but otherwise I felt great.
When I got home, my left adductor thigh muscles were sore. I iced them, and the soreness went away.

Four days later, I ran my marathon. Around mile six, I started feeling that soreness again. It was a mild nagging pain that went away by mile 10, and caused me no trouble thereafter.
Then, with each successive run, it's nagging me even more. I ran 8 miles on Sunday with it sore most of the run, then took three days off and on Wednesday it was back again with a vengeance.
Now I am taking a week off. I'll be doing lots of biking and swimming, and maybe a couple of power hill walks (though I'll be tempted to run... but I won't). I'll also be icing twice a day and taking my ibuprofen.
Image from marathonracerunning.com
Posted by VeganHeartDoc at 9:00 PM 1 comment:

It probably wasn't the most sane idea to sign up to run another marathon two weeks after dropping out of a marathon. But, I wanted to see how my training would stack up and I hoped my nerves wouldn't get the best of me.

I ran the IMS Arizona Marathon this weekend. This time I finished, though I still landed at the port-o-potties three times and had stomach cramps that caused me to walk intermittently, especially at the end.

It was a somewhat tough, point-to-point, mostly uphill course with a net elevation gain of just under 400 feet. And it was the smallest race that I've ever run, with only 99 marathon finishers.

I am so grateful for my friend who ran with me. He hadn't run in over a month, yet braved the race with me. For the 15 miles that we ran together, he kept me entertained and motivated, though I wasn't the greatest most friendly running partner that day.

My time was 4:34:09. That's third place in my age group (out of five -- yes that's intentionally in small print). That's a personal record by over 23 minutes. Minus the gastrointestinal issues, I could have easily taken ten minutes off that time.

Now I just need to figure out what to eat and what not to eat. Pre-race dinner was pasta with marinara and some faux burger crumbles. Perhaps it was the soy? Or maybe I'll just pop some Immodium before my longer runs??
Posted by VeganHeartDoc at 11:16 PM 4 comments: 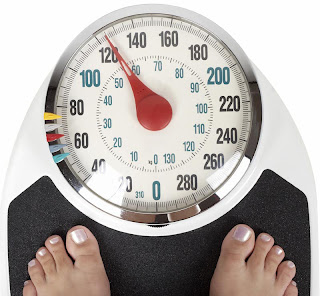 Obesity contributes greatly to heart disease. When people don't exercise and carry too much weight, they put themselves at risk of diabetes, high blood pressure, and elevated cholesterol.
I tell a lot of people to lose weight in order to reduce their risk. Here are some weight loss tips that I've seen work:
- Use a nutritionist. That's someone who can tell you exactly how many calories your body needs and what foods you should and should not be eating with any particular medical problem.
- Write down everything you eat and the approximate number of calories. Share that diet diary with someone, such as a nutritionist, your doctor, or a personal trainer. It keeps you accountable. If you have to write down that handful of M&M's that you're thinking of eating, are you really going to eat them?
- Weigh yourself daily. That way you see trends of weight gain before your weight gets out of control.
- Follow a vegan diet, or at the very least, cut back on the quantity of animal products that you consume. Vegan diets have been shown to aid in weight loss, help control blood sugar in diabetics, and lower cholesterol.
- Do some form of exercise most days of the week. Long-term registries of people who have lost weight and kept it off for several years show that the vast majority of successful "losers" excercise almost every day.
- Remember that weight loss and weight maintenance is about lifestyle change. These are not changes that you are to make for a couple of weeks and then revert to previous poor habits.
Posted by VeganHeartDoc at 10:26 PM 7 comments:

Getting Ready for a Comeback

It's been a tough week emotionally. I keep thinking back to my marathon mishap from last Sunday, and I think it all comes down to my chronic stomach issues.

I do fine on any workout under two hours. However, anything longer than that, and I've had stomach issues. First I chalked it up to the protein in the Clif Bars that I would consume during a race. Then, one particularly bad day occurred the day after chewing four pieces of sugarless gum (sorbitol increases intestinal motility). I think I just have a sensitive stomach and need to stick to basic pasta and marinara the night before a long workout.

I felt sick all day on Sunday and much of Monday. But, I forced myself to drink water and juice to rehydrate. And, I wasn't sore, at all! I think that's because while I dropped out around mile 21, I had been essentially walking from mile 15. On Tuesday, I did a relatively easy workout at the gym, and on Wednesday I was back to my usual workout with my personal trainer in the morning and a track workout in the evening.

Since I can't have a DNF hanging over my head, I've decided to race the Arizona Marathon on Sunday, February 15. My coach had me ramp up this week, run 9 miles today, and then next week I'll taper my exercise in preparation for the marathon.

Having to drop out of the marathon last weekend was a tough blow, but I'm learning from the experience and moving on.
Posted by VeganHeartDoc at 3:54 PM 1 comment:

DNF stands for "Did Not Finish". Today is my first DNF, at the Surf City Marathon. Marathoners like Paula Radcliffe and Deena Kastor, and triathletes Chris "Macca"McCormack and Norman Stadtler have DNF'ed at big races. So I suppose that middle-of-the-pack athlete me can have a bad day too.

I've done marathons and half-ironman distance races. I trained harder for this marathon than for any other marathon that I've done. I did a 22-miler with solid 10-minute splits. I ran an 18-miler in negative splits just three weeks ago. And, two weeks ago, I finished a half marathon in 2:03. I was hoping to not only do well, but to have a personal record by several minutes. So what happened today? I'm not sure.

Dinner last night was at a Mexican restaurant, with pinto beans, rice, and some veggies and fried bananas. It wasn't anything too unusual, other than that I probably ate more than I usually do. But my stomach was fine in the morning. My pre-race fuel was my usual raisin bran with soy milk, yogurt, and a piece of fruit. I felt strong at the start. My strategy was 9:45/mile splits. I was hitting those consistently, maybe a little faster on a couple miles with a downhill. I was fueling with Gu, and with the Sharkies on the course which I specifically tried out on my own last weekend because I knew they'd be at the race and wanted to make sure I'd digest them okay. And I felt great -- that is, until about mile 13, when I slowed down a bit. I had a little bit of stomach cramping. Maybe I was dehydrated, I thought, so at the mile 14 water station, I walked through, drinking a cup of electrolyte drink plus two cups of water. I felt better for a little bit.

Then came worse stomach cramping and the urgent need to stop at a port-o-potty. And again, I felt a little better after that. I passed another water stop, but took nothing because I just felt I couldn't keep it down. At the next water stop I grabbed a Larabar, which I knew from past experience that I could digest while working out. But again the Larabar sat in my stomach like a rock. I had to walk a lot because running would induce cramping. Then I became lightheaded. I walked through several water stops without taking any drink or food because I couldn't keep them down. I passed the first aid tent at mile 18, thinking about stopping, but still, I wanted to see if I could feel better. I knew my goal time of 4:15 was in the toilet, but maybe 4:30? 4:40?

No such luck. I just felt worse and worse. A lot of people that I knew passed me, asked if I was okay. I appreciated their enthusiasm, but I was so embarrassed. Here I am, having trained so hard for this race, and I'm walking the last half of a marathon.

By mile 19, I resigned myself to the fact that I would not be finishing. Running just wasn't a possibility at this point, because I was even more lightheaded. I hadn't had any fluid since mile 14, which was well over an hour ago and I had no way of keeping any fluid or nutrition down. I had yet another emergent port-o-potty stop at mile 20. I couldn't feel my radial pulse, which is an indication of hypotension or low blood pressure. And finally I saw the first aid tent at mile 21.

I stumbled over and as tears streamed down my face, I stammered out.... "lightheaded.... cramps...." Next thing I knew I was lying down in the first aid tent, in tears, covered in blankets. I'm not one to cry at the drop of a hat, but I felt sick, but worse yet I was ashamed of myself having worked so hard for months for this marathon to land on a cot in a first aid tent. There, I was able to sip a bit of water, about an ounce, but not more than that. After resting for what felt like an eternity, shivering under countless blankets, I could sit up and not feel like I was going to fall over. I rode back to the start in the "sag wagon". I could have stopped at the first aid tent to get some IV fluids, but I didn't want to be in the happy race environment any more, so again stopping at a port-o-potty twice on the way, I stumbled to my car and drove home.

On the way home, I was able to keep a fruit smoothie down, though that wasn't pleasant. I weighed myself at home and found that I'm six pounds less than when I started this morning -- clearly dehydrated. And even now, hours later, I'm not feeling that great, though I'm sitting here sipping orange juice and oatmeal.