I took some time off from serious training. It was something I needed to do, to take a break from structured fitness, and to try to accomplish a few things in my personal life.

But now I'm back.  I love having a goal, and what better goal than to succeed in a race, right?  I'm training for a half marathon, the Santa to the Sea half marathon on December 11.  Here's how I'm getting back to it:

Set an Attainable Goal
I ran a 5k race in early October, and that was a big wake-up call that my race pace was not where it once was -- that said, it wasn't entirely terrible because I was the third fastest woman overall.  While I could run a 1:48 half marathon when I was in peak shape, that's not realistic right now.  With five weeks to train, my goal is 1:56, which is just under nine minutes per mile.

Running
I run four days a week, no more than that.  One run is at a tempo pace, or about 15 seconds slower per mile than my projected half marathon time.  One run is a long run, ranging from 8-12 miles. 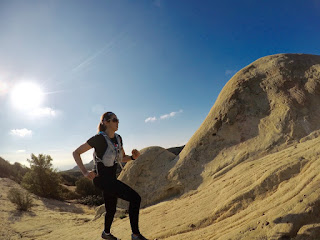 A lot of running happens on trails.  Trails are gentler on the joints, provide far better scenery, and include hills and uneven surfaces for challenging muscles more than the repetitive footstrike of a flat surface.  This picture is courtesy of Gerardo Barrios of Fortius Coaching, taken on the trails of Malibu Creek State park.

Strength training
Interval training and weights have always helped me achieve my goals.  My friend Deirdre Hamilton opened up Hamboody Strong, her own group training playground in her backyard. 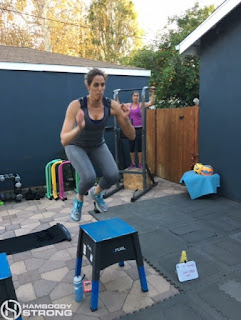 Exercises include box jumps (shown above) or box step-ups, kettle bell swings, battle ropes, planks, mountain climbers, or whatever Deirdre imagines for the workout of the day.  If you're local to Lake Balboa, it's a great workout for anyone who wants to build strength and fitness, even beginners!

Swimming
I still swim twice a week with Golden Road Aquatics.  Swimming keeps me limber and stretched out, and is a great way to start a morning.

Rest Days
I rest at least once a week.  During the first couple weeks of half marathon training, I rested two days a week,

I am hoping my training leads to a successful half marathon, and will keep you posted on how that goes!

Posted by VeganHeartDoc at 8:44 PM No comments: