This was my last triathlon of the season... and while it's been a great season, I couldn't have asked for a better race to end things with.

I decided to race as an Athena (women 150lbs+) -- Malibu Classic Triathlon is a competitive race, and here is a place where I could have a chance of placing high.

Conditions were perfect, with the day starting a bit overcast, air temperatures in the mid-60's, and a water temperature of 65 degrees.

Swim
One of the down sides of racing Athena is that I start the race in the absolute last wave group.  As the gun went off, I ran into the ocean.  This is my first ocean race since my mishap south of Venice Pier a couple of months ago where I nearly drowned.  My once fearless approach to ocean swimming is now tempered with a significant amount of trepidation.  As we ran into the ocean, I dove under one wave.  Then a larger wave came, and I said, out loud, "oh my g-d", dove under it, came up hyperventilating.  It was quite a crowd of us swimming, so until I got around the first buoy, I stuck with breaststroke.  Once that turn was made, my breathing calmed down, and I swam toward the last buoy, sighting every four strokes.  After making the last turn and heading to shore, I was grateful to the lifeguards who yelled to us that there were big waves behind us.  I turned around, panicked for a second, dove under the wave, then turned around and came to shore. 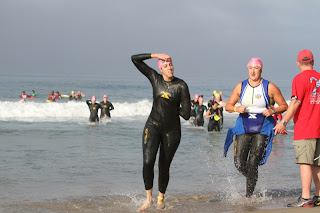 Picture taken by Paul Hekimian of LA Tri Club, as I'm trying unsuccessfully to yank myself out of my wetsuit and run at the same time.

Coming out of the water, I was a bit disoriented, and I started running in the wrong direction.  I couldn't get my wetsuit zipper open, and once I finally did, I couldn't free up my left arm.  So, running into transition with my left arm pinned inside my wetsuit, I looked like a woman in a straitjacket.  It was an awesome look.  After that, to complete the whole klutz act, I couldn't get my bike off the rack, and then in moving my items one of the snaps came loose off my race belt and went flying off (I found it when I returned after the bike ride).

Bike
As I ran in from the swim, I saw one of the Athena racers running off with her bike.  As the bike has always been my limiter sport of the three, I considered her to be gone in all likelihood, with the possibility of maybe catching her on the run.

I guess I've gotten stronger on the bike, because I passed just about everyone on the course.  Over the entire 18 miles, only three passed me.  And, at mile 7, I passed the Athena woman who I knew was ahead of me.

And a point of bike etiquette:  When you pass, say "On your left".  Or "Hi."  Or "I'm passing you."  I spent many years being the slow girl on the bike (and amongst some groups I still am) and having people whizz by me within inches and not say a word to warn me.  I said "On your left" maybe a hundred times.  Clilmbing PCH out of Leo Carillo, gasping for air, it was shortened to "Left."  But, out of courtesy, I still warned those that I passed.
Bike time -- 58:49.  Last year's time was 1:03:37.

Run
I love the run course -- along Zuma Beach and back.  The fact that it's out and back means I get to see many of my friends and teammates who are both slower and faster than me, which is always fun.  My first miile was 8:13, and I got slower from there, which wasn't good, but I still averaged 8:34 per mile over 4 miles. 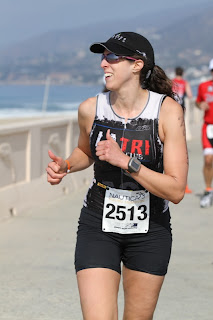 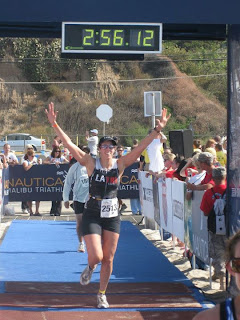 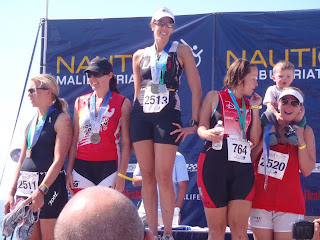 I won first place out of 32 women in the Athena category!  But it gets better -- had I raced in my age group, I would have taken 8th place out of 83, which is the top 10% of the age group, which means that I have qualified for USA Triathlon Age Group Nationals 2012!!  The race takes place in Burlington, Vermont, and I've always vowed to myself that if I ever qualify for an event that I will go there and do it, so it looks like I have a little summer vacation for next year! 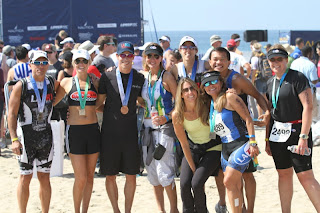 I could not have asked for a better ending to my triathlon season.  Thanks Coach Gerardo for your coaching wisdom, thanks Team Fortius for being awesome training partners, thanks Kiki my personal trainer for pushing me to be stronger, and thanks to all the plants that I eat that give me the fuel to be an athlete. :)
Posted by VeganHeartDoc at 3:59 PM 2 comments:

Vegans are the ONLY Normal Weight Population!

When classified by diet, a recent study found that people who are omnivores, who follow the Standard American Diet, are the heaviest, with an average body mass index of 28.8.

Vegetarians, who do not eat meat, but may eat dairy or eggs, weigh even less, but even they are on average within the category of being overweight.

Vegans, who do not eat any animal products, are the only one of these four groups who are on average a NORMAL weight!

Watch a video discussing the findings from this study from the Journal of the American Diabetes Association here:

And while you're there, explore Dr. Michael Greger's web site, http://www.nutritionfacts.org/.  There's some great information there, and Dr. Greger delivers the facts with his unique sense of humor.
Posted by VeganHeartDoc at 5:11 PM 7 comments: