Be critical of what you hear...

We hear all sorts of messages about our health, and many of them are conflicting.  However, it is important to see who and where those messages are coming from and what context they are in.

I am going to give a couple examples.

I was recently told this by a patient with coronary artery disease who cut the dose of his statin on his own, for fear of increasing his risk of death because his cholesterol numbers were too low.

Several groups of people have low cholesterol -- people with advanced cancer, liver disease, or anyone with severe calorie malnutrition.  And yes, these people are more likely to die sooner.  But, I think it's obvious to say that they aren't dying because their cholesterol is too low, they are dying of their underlying disease.

And it is that underlying disease that is causing the low cholesterol numbers.

However, on the converse, among the majority of people, those people who don't have terrible life-threatening diseases like those described above, lower total cholesterol numbers are not associated with increased mortality.

In fact, in those patients who have coronary or vascular disease, we use statin medications to drive the cholesterol numbers down.  But, as we are learning, more important than making the numbers look nice, statins perform an important role to stabilize and potentially reverse the plaque that is in the arteries, improve endothelial function which is the functioning of the lining of the arteries, and reduce risk of heart attack and stroke.

And, in this patient population, problems with cholesterol numbers being driven "too low" have not been identified in the large randomized controlled trials.  Further, there is a population of people with a genetic PCSK9 mutation which leads to extremely low cholesterol numbers, and these people have very low risk of cardiovascular events.

2) "Are Himalayan salts good for my health"?

Interesting question.  I've done a little research on this question.  When you enter "Himalayan salt" into a search engine, the vast majority of sources of information come from places that want to sell you Himalayan salt.  So, anything you read on those pages you need to take with a grain of salt, so to speak.

That said, regardless of the source of the salt, it contains sodium.  Sodium does not need to be supplemented in our diet, and in fact diets higher in sodium are associated with higher blood pressure and higher risk of cardiovascular disease.

Bottom line is this -- do not believe everything you hear about health.  Question everything.  And if I'm your doctor, question me too!!!  When a patient asks questions, I know he is processing what I have told him, and a knowledgeable patient is a powerful patient who has the tools to make good choices for his health.

Posted by VeganHeartDoc at 5:25 PM 3 comments:

I do this race every year; this was my 7th year in a row.  I love the Nautica Malibu Classic Tri because it's well-organized, a race where lots of people get exposed to the sport and some for the first time, and it's just a big fun race with a few celebrities.

This is actually my shortest triathlon of the year, amongst the three half-Iron distance 70.3 races and Santa Barbara Long Course which I raced a few weeks ago.

Swim
The women start after the men, and start from youngest to oldest, so the women 35-39 was probably the third to last wave.  When you start after a lot of people, there are lots of people to pass, which can be fun. 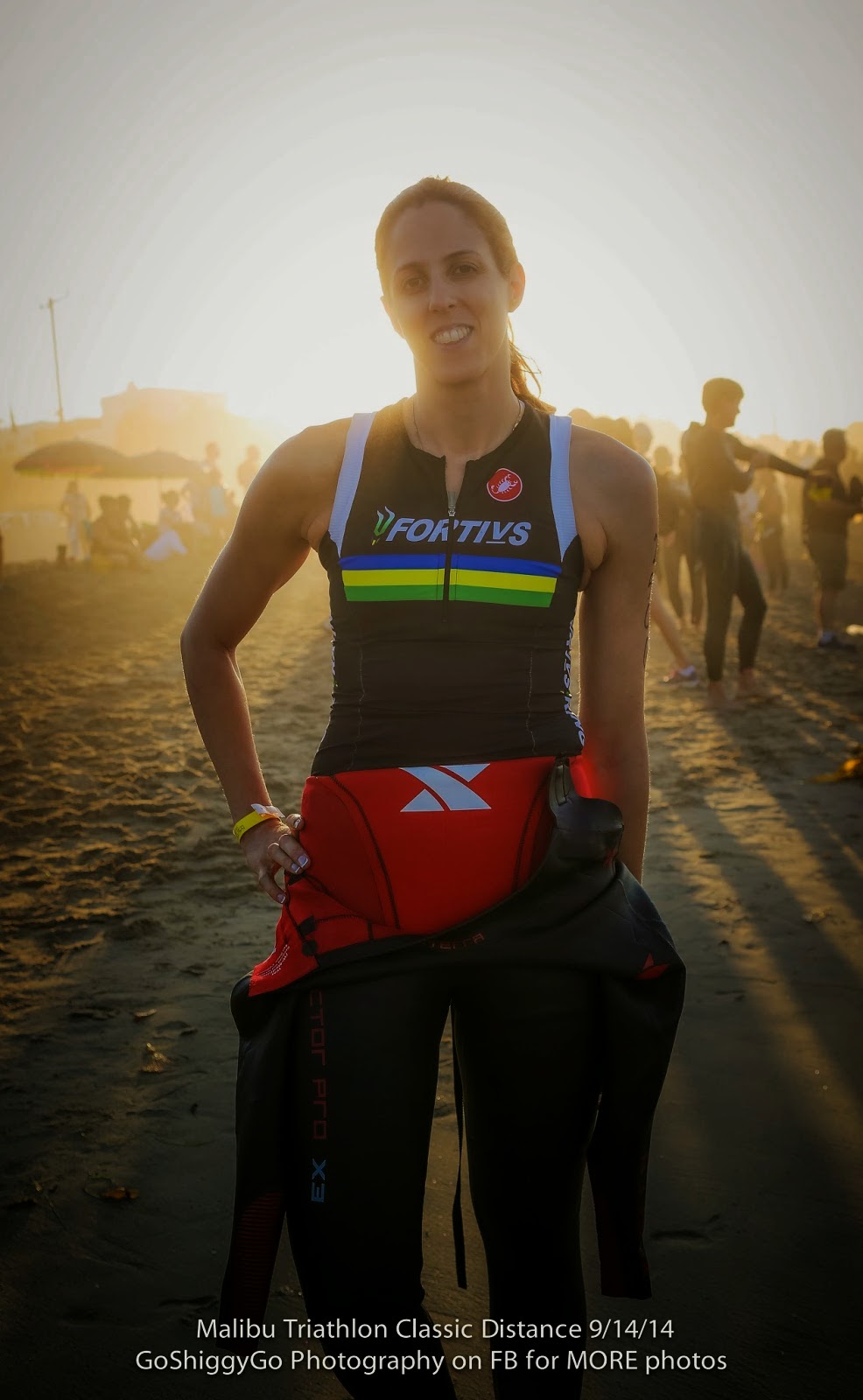 Photo courtesy of my Shiggy Ichinomiya, aka GoShiggyGo.

I started the swim in the second row, and fairly close to the left since there was a current that would be pulling us to the right, or west.  As we ran in to the water, there were a few significant waves that I managed to dive under.  The current was definitely pulling us west, and I had to redirect myself to get to the first buoy.  Once around the buoy, there was a fair amount of chop, but I felt okay.

However, getting out of the water was a different story. I'm a hesitant ocean swimmer, particularly when it comes to exiting the water.  The westward current persisted, and I saw several swimmers who were way too far west.  I was able to sight the flags for the swim exit chute, so I didn't go off course.  In addition, there were a few waves, and I almost felt like I was being sucked back in.  As I looked behind me, I saw a wave coming, and I panicked briefly, but turned around and dove under it.  And then another wave that I dove under. I looked behind me, and the water looked flat and I went for it, put my head in the water and probably swam at least ten strokes without breathing in a panic to get out.

Bike
In the transition area, everything went seamlessly, wetsuit came off without any crazy dramatics of arms or legs getting stuck.  Helmet on, wrestle bike off the rack, and go... but WAIT!  No sunglasses!  So I turn around and grab my sunglasses and off I go. 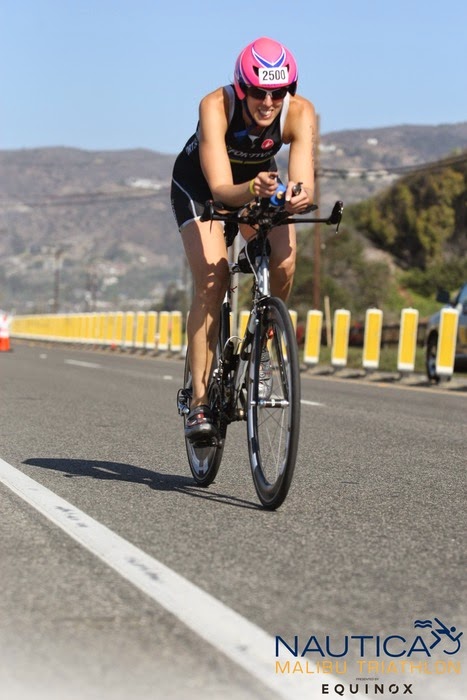 18 miles of biking and I passed a ton of people, but no one passed me.  I stayed on my aero bars most of the time.  I did a lot of yelling "On your left!" but I think that's a courtesy so that no one is freaked out by my suddenly approaching.  My chain dropped at Leo Carillo, the turnaround point, but we were moving slowly to get through a narrow space, so I jumped off the bike, put the chain back on, and wasted no more than 20 seconds.

Run
I saw only a couple of bikes on our rack, indicating just a couple women in my age group ahead of me.  Maybe I took too long typing my shoes, but my 2:26 T2 time was too long.  Maybe I need to re-take that part of kindergarten, or perhaps as I'm breathing heavy I need to be a little more speedy in getting my shoes on as I catch my breath. 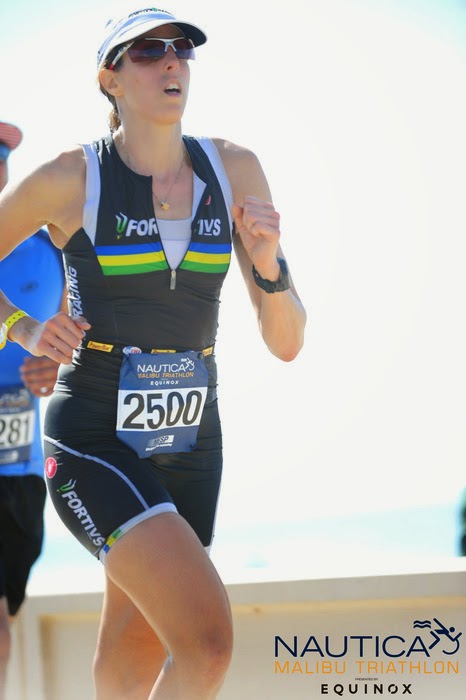 Off onto the run.  4 miles, supposedly, but it ended up being 4.2 miles.  I passed a lot of people, but most importantly, one of my age group competitors Abby, who I know from having run track with her before, sped past me.  She said "good job", and I said "good job" to her too.  She was blazing fast, so I knew I wouldn't even have a chance of keeping with her, so I let her go.  As it turns out, she finished fifth in our age group, and I finished sixth (with only five spots on the podium). 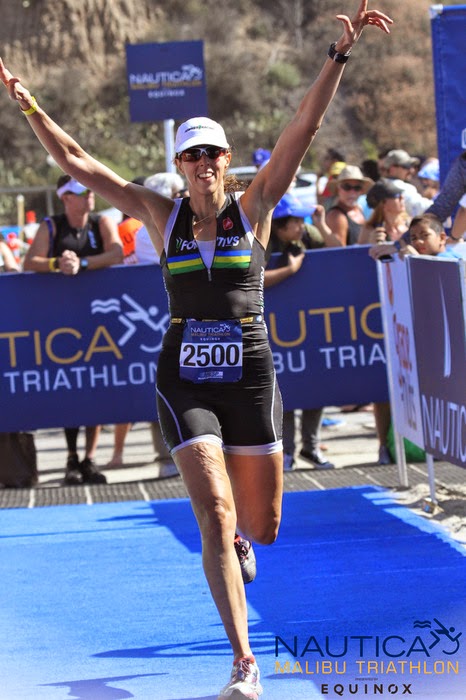 My overall time was 1:56:25.  Sixth place out of 107 women in our age group.  Good enough to qualify me for USA Triathlon Age Group Nationals for the fourth year in a row, but just one place away from a position on the podium.

One more race left this season, and that is Silverman 70.3 on October 5.  And then a few months off.  And when I say "months off" that doesn't mean the couch and bon-bons.  That means I exercise, on my own terms.  Not sure exactly what that exactly will be yet.  I'm thinking it will be a lot of boot camp classes and some swimming and maybe a bit of running, and a fun bike ride here and there.  For me that's relaxing. :)