After my first marathon, or my first Ironman race, I remember feeling lost.  I had achieved my goal, and didn't have anything to aim for, to train to achieve.

I don't feel that way after Ironman Boulder.  Actually, I'm happy.  I took three days off from exercising after Ironman, then went swimming.  Three days may seem like a short period of time, but by then, I had no aches.  I felt energetic.

I still exercise six days a week because that's what makes me happy.  I've been doing a lot more swimming, and more strength training.

I swim with Golden Road Aquatics, a masters swim team in Burbank.  What if I swim five days a week with a team... what will happen?  I've never done that before.  Coach Mike Lucero has given me a few pointers on my swim stroke, and it's a great bunch of folks who show up at the pool.  Maybe one day I could swim in a meet.... we'll see. 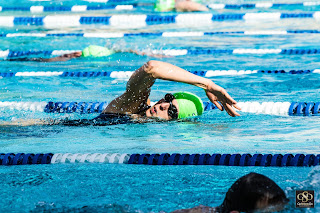 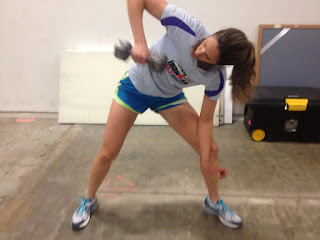 Did you know.... if you want to get skinny and get in the best shape of your life, an Ironman is NOT the way to do it???  I put on a couple of pounds, and definitely lost some muscle tone.  With weight training, I'm hoping to get some of that muscle back.

Malibu Triathlon is coming up on September 20.  I may put a bit more structure into my training before that, but for now I'm just having a good relaxing time doing what I want.
Posted by VeganHeartDoc at 9:18 PM No comments:

Five years ago, after completing Ironman Lake Placid, I loudly declared myself  "one and done", that I would never race another Ironman distance triathlon.

And yet, one year ago, I signed up quietly for Ironman Boulder.  Outside of my coach and members of my team, I didn't tell anyone.  After so vehemently proclaiming my disdain for the Iron distance, I didn't want the pressure, or the mocking, to distract my training.  So I didn't blog about it, I didn't post on Facebook about it, I didn't tweet it... I just trained.

Why would I put myself through another Ironman race?  I wanted to prove to myself that I am a stronger athlete than I was five years ago.  And, with at least 40 other friends and teammates, and my coach, racing, it seemed like the perfect opportunity. So, not only did I arrive four days in advance to acclimate to the altitude. 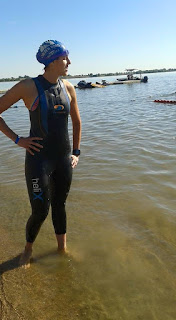 Boulder Reservoir.  Day before the race

Water temperature was 78 degrees.  When the temperature is above 76 degrees, participants are instructed that wetsuits are permitted, but if you wear a wetsuit you will not be eligible for age group awards or a Kona slot for Ironman World Championships.  I am in contention for neither, and I know I swim fast in the sleeveless wetsuit that I borrowed for the race.  So, I opted to wear the wetsuit.  The vast majority of competitors made the same decision.  The problem is, this was supposed to be a "rolling" start, with people starting based on their anticipated finishing pace.  The minority of participants who were not wearing wetsuits were seeded, but the 1500+ of us who were in wetsuits were not.

As a result, there was no order to who entered the water when, and I would say the first ten minutes of the swim was utter chaos, with fast and slow swimmers intermingled, and CROWDED!!  I found myself closed in by other swimmers, hyperventilated and panicked like I can't recall having done in a long time, and actually did the breaststroke for about a minute until I could calm myself down.

It took a little over ten minutes to feel normal in the water.  From there onward, I felt comfortable.  Though the water felt a bit warm, I was grateful that I chose to wear the wetsuit, as I passed a lot of people swimming in tri kits.

I hoped to finish in 1:20.  I finished in 1:21, two minutes faster than in Lake Placid five years ago.  Close enough.  I run out of the water, dashing around the folks who are meandering and walking, grab my transition bag, rip it open outside the change tent, grab my helmet and shoes, run to the folks with the sunscreen, let them lather some on me, run to my bike, and off I go.

Compared to where we train here in Southern California, this wasn't a hilly course.  Two loops, with a couple of gradual hills, and then a third separate loop with a couple of steep climbs.  Temperature was upward of 90 degrees throughout the bike ride.  My nutrition on the bike consisted of coconut water mixed with water, four Skratch Labs packets of gummy blocks, a peanut butter and jelly sandwich, and a carrot cake LaraBar.  In addition to about 32 ounces of coconut water, I drank about seven bottles of water.  I had some cramping in my toes around mile 80, but those got better with eating another packet of the Skratch blocks and chugging a bottle of water.

Overall, I felt pretty good on the bike.  My shoulders were a bit achey, and I got out of aero position about every 5-10 minutes to stretch. 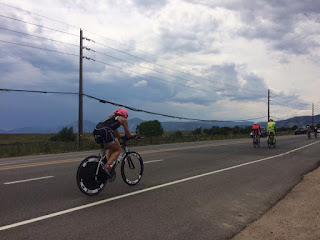 Photo by Kelly Walsh-Barrios -- thank you Kelly and Vera for the cheers on the bike course!

The course was a little short, about 109 miles instead of 112, and I cruised into transition, left the shoes on my bike and ran in my socks.  Again, people walking their bikes through the transition frustrated me, and after I had my transition bag, I quickly changed socks, threw on my running shoes and hat, and off I went.

I dash onto the run course, and there is my friend Rhonda directing traffic at the start of the run, a location that each runner would pass four times during the 26 mile run.  I was so thrilled to see some friendly faces.  I declare, "I feel awesome!!" and off I went on the run.  My first mile was about 9:30, my second just a bit slower, and then the next four miles at about 11 minutes per mile.  Then the legs got heavy.  Really heavy.  Mile pace dropped to about 14-15 minutes per mile.  Nothing specific hurt, my legs just ached.

And my stomach.  I didn't want to eat anything.  I wasn't nauseous, I just felt uncomfortable.  So it was a very good thing that I ate well on the bike  On top of that, I was a little grossed out by the hygiene of the food at the aid stations.  Trays of grapes and fruit that triathletes were dipping their dirty little hands into.  But, at every aid station I did drink a small cup of water and dump another cup over my head.  I had a few sips of Gatorade at one aid station, but that was it, I just don't like the taste. 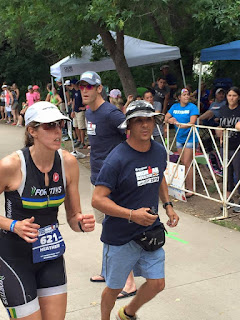 Getting some much needed encouragement
(Photo courtesy of Jennifer Hochman Urban)

I kept on running.  Or shall I say slogging.  Out toward a river recreational area, with lots of families and kids, occasionally dashing onto the run path.  Fortunately a few volunteers were keeping the kids off the path.

After mile 14, the miles dragged.  Each seemed to last an eternity.  My nutrition from mile 10 onward consisted of a Clif pureed sweet potato packet and some medjool dates from my special needs bag.  I had stashed a bottle of coconut water in the bag, and drank about half before I chucked it in the trash.  My stomach is definitely misbehaving if I'm throwing out coconut water because coconut water is one of my favorites.

Every so often, I walk a little bit, but I know I have to run if I want to keep up a reasonable pace and get this awful run over with.  I see a lot of people walking, but I remind myself, as much as it hurts, even a slow jog is faster than a walk.

At mile 23, I know I have one more out and back to do and the end is sort of in sight.  So I pick up the pace to an astounding 12:30 per mile, which is all my heavy legs could muster.  In the last mile, I couldn't see the turnoff for the finish line, and I asked volunteers, and someone who I thought was a volunteer, did I miss the turn off for the finish line?  None of them knew, so I kept on running, until I saw a clear sign to turn off the path.

Finally!  I run off the bike path, onto the street, see an arch ahead of me, then hear music and people cheering.  I let a couple guys run past me because I want them to have their own moment at the finish line, but more importantly, I wanted mine!  As I approached, I grinned, tears welled in my eyes (yeah, cheesy, I know), I hear, "Heather Shenkman, of Sherman Oaks, California, You are an Ironman!" and I cross the finish line. 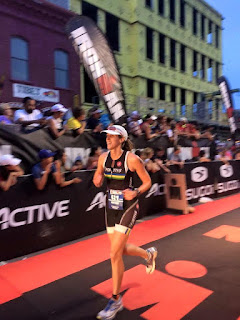 I'm thrilled with my swim and bike, but my run was not very good.  At 5:31, I was six minutes SLOWER than I had been in Lake Placid.  What happened?  I'm not entirely sure.  I think I hydrated well enough; other than some brief cramps on the bike, I didn't feel like I was dehydrated.  I drank at every aid station.  I don't think I destroyed myself on the bike either.  Maybe it was just a tough course and the altitude caught up with me.  That said, my rank on the swim was 36th, bike 41st, and run 46th.  So the run wasn't that far off base from the other two disciplines, relatively speaking.

Two days later as I type this, I feel pretty awesome.  I am walking like a normal person.  My legs are a little achey, but really, nothing hurts.  I am full of energy.

Coach Gerardo Barrios, for saying, "I knew you'd sign up for another one" when I took the leap a year ago, and preparing me for the big day.  Thanks to his training, not only did I have a good race, I'm not in a world of pain and feel like a normal person two days after the race.

Friends/teammates on the course, including Kelly and Vera at mile 102 on the bike when I was so glad to finally see a friendly face, Lori and Shay in the first transition area, and Rhonda on the bike course and in the finisher chute.


When will I do my third Ironman?  The answer to that is never.  And this time I mean it.  I don't love this distance, I feel like I proved what I came back to prove, that I'm faster than my 14:45 time in Lake Placid, on a tougher course, at altitude, and five years older.  Nothing more to prove.

Posted by VeganHeartDoc at 9:47 PM 5 comments: