It's been a week since the race, but what better time than ever to post a race report???

In terms of my own performance, I had a pretty good race.  But in terms of management by the race organizers, this was the most poorly run triathlon I have ever participated in.  I will share my thoughts on that at the end of this post.

Early start
The weather in Tiberias is hot and humid and the temperature is 90° and upward on any given day this week. We arrived at the transition area just before 4:30 AM, ready for a start just before 6 AM.

Swim start
This was a large group that included all Olympic distance triathletes under the age of 39 and those aged 55 and higher.  An interesting combination of swimmers, the elite young and the extreme old, all in one wave.  I started toward the back of the group because I knew there were some spectacular athletes and swimmers who are far faster than I. I think this was probably one of the most violent swim starts that I have ever experienced. I felt like there were people all around me, in front of me, to my side and behind me. I took a few breast strokes just to get my rhythm and let a few people move ahead of me. Then, things were okay.

From what I'm told, there are a number of athletes who cut across the course and did not swim all the way to the buoys for the Olympic course. Instead, they turned at the sprint course buoys. I don't know if this was intentional but to me it was quite clear where we were supposed to swim and I followed the rules. I'm sure several of them had very short swim times recorded.

Unfortunately I ended up off a bit off course. It was difficult to sight some of the buoys. 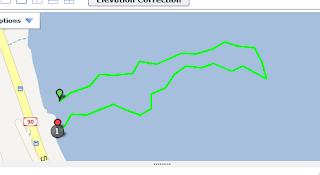 This is the TrainingPeaks file mapping my swim.  This was an out and back, starting from the green and ending at the red circle.  You can see just how far off course I ended up. 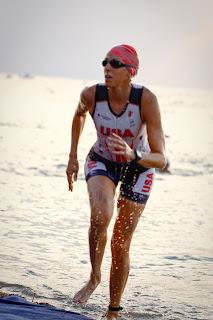 At the end of the swim, I did more of a crab walk on hands and feet to get out of the water because there were a lot of rocks. The Australian coach, who has become a friend this week, was yelling at me to get up faster, but the last thing I wanted to do was injure my feet.

Transition
There was a long run from the water to transition. I banged through, helmet on, shoes on, sunglasses on, grab a gel and go.

Bike
The bike was an out and back course, repeated twice. The course had been shortened to 36 kilometers. I felt really good here. This is the first time that I have ever done a triathlon and no woman has passed me on the bike course. 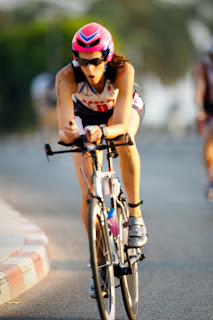 Credit is due either to my coach Gerardo who had me working hard on my bike before this race, or to my brand-new Hed disc wheels. Regardless, I had a hell of a bike leg.

Run
The run course was literally out and back four times along the same 1.25 kilometer stretch of road. But this made sense given the hot humid weather. There was an aid station midway along that stretch, so we would pass the aid station eight times. I took a water bottle every time I passed and dumped it on my head and then had a sip or two. I felt very good on the run, didn't start too fast. Garmin was acting up so I don't know exact pace. 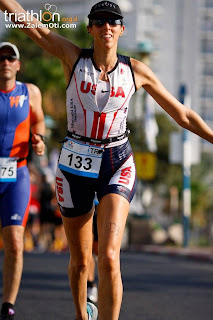 The Israeli Triathlon Association like this picture of me enough to feature it on their Facebook page.  It's my game I play with the photogs on the course -- I see what the goofiest gesture is I can make for the camera, without the photog getting mad and putting down the camera.  Here I am pretending I'm an airplane.  And below here I am throwing my hands up like a goofball: 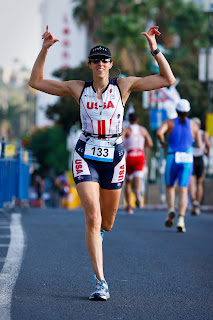 During the run, I passed more people than people who passed me.  The temp was getting hot, from what I hear it was 100 degrees, and in fact at about 3 1/2 hours after the race began, the course was closed and anyone still racing pulled off the course because it was too hot.

My total time:  2 hours 44 minutes.  Oddly enough, my bike was my best ranked of the three splits, followed by the swim, and then the run.  Usually I'm the opposite.  I guess it reflects my hard work on the bike. 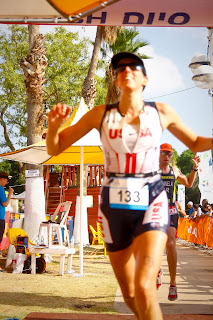 I placed fourth out of seven in my age group.  The top three were all Israelis with very fast swim splits, and none of them were entered in the Maccabi Man/Woman competition.  Regardless, I'm happy with my performance.

That said.....
Organization of the Race
Worst organized race ever.  Particularly for something that is an international event as part of the Maccabiah Games, and supposedly an ITU-sanctioned event.  We didn't find out about the opportunity to swim on the course until after the fact at the pre-race meeting, when the race director said, "You all had the chance to swim on the race course from 3-5 pm."  Ummm, no we didn't, at least those of us who weren't Israelis, we didn't have that chance, thank you, giving the Israelis yet another advantage over the rest of us.  Then we were told that we needed to bring our own swim caps.  Several of my team members didn't have swim caps with them, but fortunately there were a few of us who had extras to go around.  We were also told that we needed to body mark OURSELVES -- really?  Very strange.  And at packet pick-up, we were notified that we had to put down a 50 shekel deposit to get our race chip, something we had not been told in advance.  The race course had a guy at the finish turn-off who spoke no English and wasn't paying attention, so several people missed where they were supposed to go to finish.  And, the supposedly "closed" bike course was not closed, with people walking back and forth, and unfortunately one woman stepping off the curb and getting hit by a cyclist who flew over his handlebars, and yet fortunately was not severely injured.

For an international event, this race was an absolute embarrassment.

Regardless, I had fun and had a good race.  But, next time around, they really need to shape up.
Posted by VeganHeartDoc at 8:16 PM No comments: