Today was far from an ideal day.  In a race where hundreds dropped out due to hypothermia, I'm grateful to have finished as well as I did. 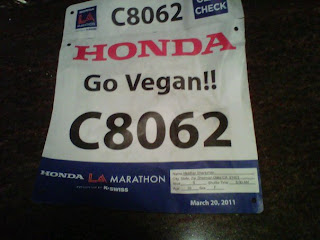 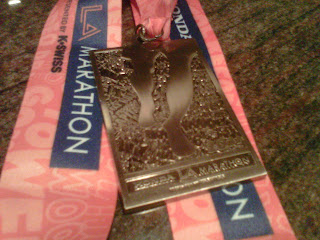 My finish time:  4:12:59.  Just four seconds slower than my best marathon, Long Beach 2009, which was run in much sunnier conditions.
It felt so good to be done!!!  I must not have looked so good because one of the medical staff approached me, and I smiled, said I'm a doctor, and I'm okay, and he let me be.  However, hundreds who crossed the finish line, mostly those who finished after me and likely weren't running the whole thing and thus didn't keep their core temperature up, were treated for hypothermia shortly after finishing.
I walked the long three-quarters of a mile or so to the marathon finisher's festival area.  It was pretty empty since not many people wanted to make the trek in the cold and rain.  I was shivering.  The music was horrible, the gear check was horribly disorganized so I decided not to wait for my bag for fear of becoming hypothermic.  However, since there were so few people at the finisher's festival, I received about ten bags of potato chips and a dozen Clif bars because so few people came to take them.
All in all, it was a tough day with pouring rain and cold temperatures.  I didn't hit my goal, but I think I did well given the extremes in the weather.  I feel like if this was a warmer day without rain that I could have done better.  But, as I know others fared worse than I did with respect to their goals and the weather, I am grateful.
Posted by VeganHeartDoc at 7:38 PM 5 comments: 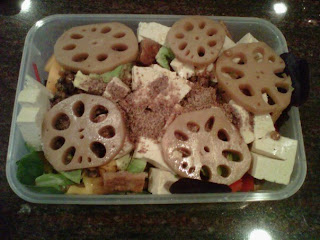 One Week Until the LA Marathon

I don't typically get nervous about races.  But I am getting antsy about the LA marathon on March 20, just one week away.

I've been training hard.  I've put in at least eight runs of 15 miles or longer.  I've done them on about a ten minute per mile pace, and I've managed to run the last few miles of those runs on about a 9:00-9:15/mile pace.

Yesterday, my "taper" workout was a three mile warm-up, six miles at "marathon pace", and a one mile cooldown.  I decided that for the sake of this run that 9:15 per mile is my marathon pace, and I managed to do that while keeping my heart rate in a respectable range of 155-165 per minute.

I care so much about this because I want to qualify for the Boston Marathon.  It's a far away dream, but I think that with the right training that I can do it.  The qualification standards just got tougher, but that just means that I have to get tougher.

This week is a taper week.  A few short runs, and some yoga and stretching.  And hopefully plenty of sleep so that I am well rested and ready on Sunday.
Posted by VeganHeartDoc at 8:23 PM 1 comment: