This past Thursday, July 30, I was interviewed on the Simon Gowen Show on LA Talk Radio. I discussed the heart and exercise and my own triathlon experiences.
Listen here.
Posted by VeganHeartDoc at 8:18 PM 2 comments:

I'm going to be an IronWoman!

I had signed up for an ironman-distance race last year, but I wasn't feeling ready to put in the training. With my heart not being in it, I decided to drop out and wait until my heart was really in it.

In this sport, and really in anything in life, there's always bigger and better. When I started this sport and was doing sprint races, I thought one day I might do an olympic distance race. Now having completed four half-ironman distance races, I'm ready and excited to take the next big step.
Posted by VeganHeartDoc at 1:03 PM 4 comments:

Another Trip to the Farmers Market 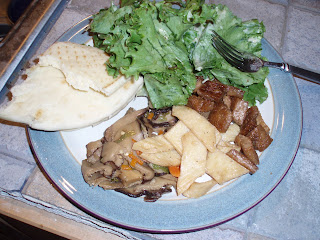 All of the above items were found at the farmers market in Sherman Oaks on my trip this evening. Clockwise from left: fresh pita bread, dark green lettuce, barbeque tofu, tempeh, and fermented shitaake mushrooms.
Posted by VeganHeartDoc at 10:50 PM 1 comment:

I knew it could be a hot day, so I was prepared. I had done a few key runs and bike rides in the heat, intentionally, so that I would be acclimated to 90+ degree temperatures. And, I had been drinking Gatorade, about two liters, daily for the two days preceding the race.

I had a really good race. Though, with all my hydration, I had five port-o-potty stops. I suppose that being well hydrated beats the alternative in this weather.

With the weather projected to be hot, I was glad to be one of the earlier waves to start. The gun went off for our swim at 7:18 am. The Russian River is a shallow river and it is possible to stand up in waist-deep water at many parts. Though I got clobbered by aggressive swimmers a few times as usual, it went okay, and as expected, my swim was about the same as my pace last year.

I quickly pulled off my wet suit and grabbed my bike out of transition. There's a short, very steep hill, as we leave transition. Rather than grind up the hill on my bike and kill my legs at the beginning of a long ride, I ran up the hill with my bike, actually passing people riding up the hill, and then mounted the bike.

Being an early wave, I was getting passed not only by women in my age group, but also by the waves of men (and women) who started after me. It is a little demoralizing getting passed by so many people. Nonetheless, I kept a steady pace of 16.5 miles per hour on the rolling hills of the course.

Speaking of hydration, though, I was very well hydrated. So hydrated, in fact, that I stopped three times while on the 56 mile bike ride to use the restroom, or should I say port-o-potty. But it worked out well because I never seemed to encounter a wait, and while I was in the bathroom I managed to talk a volunteer each time into filling up my front water bottle with Gatorade. So by the time I did my business, I was tanked up with Gatorade and ready to go.

On the positive, toward the end of the ride I started passing some people. Maybe some of them started too fast. But, by the end of my bike ride, it was approaching noon and the temperature was well over 90 degrees.

My bike to run transition was pretty good -- 3 minutes and 16 seconds.

As I started the run, I definitely noticed the heat. By now it was approaching 95 degrees. I was still feeling okay. I remembered that the run was hilly, and with this heat I knew that I was going to have to be especially conservative.

While I was apprehensive about the run, I know my strengths: I can run hills, having practiced running them in my Hollywood Hills neighborhood for months, and I know I can run in hot weather. A lot of people were succumbing to the heat and a lot were walking. I was able to run the entire course, with the exception of two port-o-potty stops, and walking for a few seconds at each aid station. There, I'd slug down one cup of Gatorade, toss one cup of water over my head, grab a piece of fruit and keep on going.

The last three miles were especially tough, and I had a little bit of stomach upset, but nothing that slowed me to a halt. My previous ten minute per mile pace slowed to closer to 11 or 12 minutes per mile, but I was still running, which was better than many people around me. I think a lot during those last miles about why I push myself to do these things -- because I love the challenge, and quite simply, because I can.

My half marathon split was 2:19. Far from my best half marathon, but considering that I had just swam 1.2 miles and biked 56, and it was 95 degrees outside, I was very pleased. 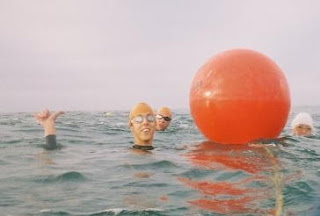 This is from my Wednesday morning workout at Ocean Park in Santa Monica, before coming to work.
Posted by VeganHeartDoc at 6:42 AM 2 comments:

I've been driving by the Juicy Ladies storefront for months, eagerly awaiting a smoothie place with maybe a couple of healthy offerings. 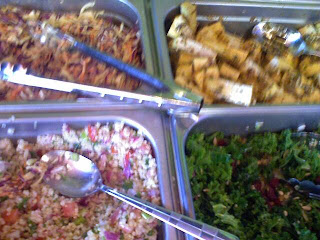 I was pleasantly surprised when I finally came in -- they have a delicious salad bar, part of which is shown above, delicious sounding sandwiches, and absolutely amazing smoothies! And on top of that.... IT'S ALL VEGAN!!!!!!

I piled up a plate with their kale salad, sesame tofu sticks, beet salad, and couscous, and when I was done had a peachy keen shake, which was creamy and delicious, sweetened not with fruit juice but with agave and almond milk. An omnivorous friend joined me today, and he too had salads and the vanilla almond shake, which also was amazing.

I think I have a new favorite lunch stop!
Posted by VeganHeartDoc at 8:58 PM 1 comment:

Can You Trust Vegan Restaurants?

This blog posting has made me think twice about being so trusting.

Seventeen vegan restaurant items were tested for egg, casein (a dairy derivative), and shellfish. Ten of the seventeen, including some of my favorite places like Real Food Daily, Vinh Loi Tofu, M Cafe de Chaya, and Vegan Glory, did well. 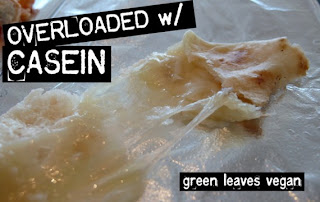 However, seven of the seventeen restaurants, most of them vegan Thai restaurants, had food that tested positive for non-vegan ingredients. For example, some of the vegan "cheeses" actually contained dairy ingredients, and many of the mock meats were found to have egg and shellfish in them.

My concern over this lack of honesty is not mostly for dietary purity. There are many people with shellfish and milk allergies, and they could easily consume a product that could harm them.

My take home message: When in doubt, order an item with tofu or seitan (see two posts below), instead of the "fake meat".
Posted by VeganHeartDoc at 9:15 PM 4 comments: 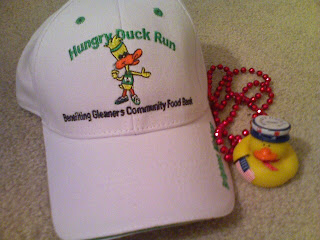 I visited my family in Michigan this weekend. On a trip, might as well do a race, right?

I ran the Hungry Duck 5K in Brighton, Michigan. It was a nice, residential area course, with some hills, including a not-so-nicely positioned hill in the last half of a mile. Nonetheless, I had a great day -- I finished in 24:55, which is my best 5K time ever, which won me third place in my age group and this hat. The duck necklace next to it was a finisher's "medal". There was even a "duck" standing at the finish line high-fiving us as we crossed. Loved it!

I was even quoted in the local paper.

Otherwise, a relaxing weekend by the lake. Caught up on some of my cardiology journals. Refreshed and ready to go back to work tomorrow.
Posted by VeganHeartDoc at 1:20 PM 1 comment:

Forgive the lame joke. If you watched Saturday Night Live in the early 90's you'll get the reference. 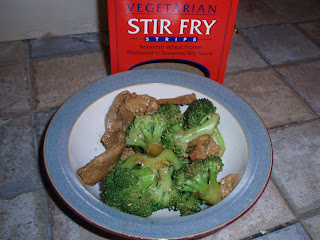 This is Seitan, which is wheat gluten. Basically, it's the protein part of wheat. The texture is meaty and it's loaded with protein and very low in fat. I stir fried strips of seitan with broccoli in a little bit of oil, soy sauce, and sesame seeds.
Posted by VeganHeartDoc at 10:16 PM 1 comment: