Up until this weekend, I hadn't raced in about six weeks.  But, there were two great races this weekend, the Race on the Base triathlon (see post below), and the Firecracker 10k today.

The Firecracker 10k was held in Chinatown.  It's the hilliest race I've ever run.  The first 3/4 of a mile is a gradual incline.  Then until mile 3 it's a climb, and some of it is quite steep.  The scenery in Elysian Park was beautiful, followed by the course winding along Dodger Stadium, and ending downtown.

I finished in 54:52, a time that I'm quite proud of given the hills on the course.  The last standalone 10k (as in not part of a triathlon) that I ran was eight years ago back in Detroit, and my time was twelve minutes slower on a flat course.  It's good to know that even though I am getting older I'm still faster :)
Posted by VeganHeartDoc at 4:52 PM 3 comments:

Race on the Base

Today was my first triathlon of the season.  It was also my first reverse tri -- run-bike-swim, instead of the traditional swim-bike-run.

I realized this was not a hard-core race.  I saw a lot of mountain bikes and even a beach cruiser!  I like these kinds of races, where many participants get their first taste of what a triathlon is like.

The weather was not the most agreeable.  We started our run in rain, and as the race progressed, the rain only poured down harder and the wind blew hard.  I put my head down and ran as hard as I could.

My run was good -- I kept a pace of about 7:50 per mile for the three mile run.  That's about my usual 5k pace.  I was worried that I might not have the steam for the bike and swim.

Coming into transition at the end of the run, I saw a full rack of bikes -- this is a good sign, meaning that I'm ahead of most of my age group.  I pulled off my wet shoes and socks, which took a few extra seconds of transition time, put on my bike shoes, grabbed my bike and headed out.  The flat bike course, which consisted of three loops of the runway, had plenty of puddles, so my bike and I got soaked.

Since I knew I had a good run, I didn't want to give up my lead, which I knew was quite possible since running is my best event and I am not a strong cyclist.  Only two women passed me on the bike, and neither was in my age group.

Running to the pool was interesting.  As I ran, I tried to put on my swim cap, which was quite awkward.  The swim consisted of four lengths of a 50-meter pool.  The pool was crowded, and swimming after a run and bike is more challenging than swimming at the beginning of the race.  At the end of the swim, there were lifeguards to help lift us out of the water and the finish mat was just a couple feet away.

The medal was pretty cool -- a dog tag: 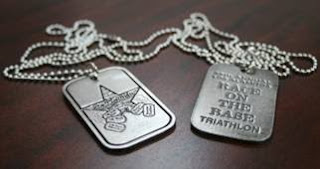 For me, it was a great race.  I was fourth place in my age group out of 56 women.  That was less than a minute and a half behind the third place winner, in other words thirty seconds off my first transition time and a minute off my bike.  But I'm still really happy with my performance.  It's a great start for my season!
Posted by VeganHeartDoc at 7:32 PM 3 comments:

Many myths exist about soy not being safe -- that it can increase risk of breast cancer, cause hypothyroidism, and increase sterility in men.

Neal Barnard, M.D. wrote an editorial for The Huffington Post that dispels these myths. 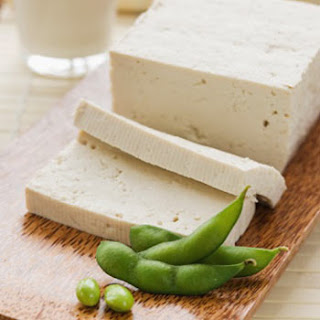 Image from gobblegreen.com
There are many benefits of soy, including reducing risk of cancer, decreasing LDL cholesterol, reducing the risk of uterine fibroids, and lessening the risk of fractures.

Read on here.
Posted by VeganHeartDoc at 3:09 PM 4 comments: 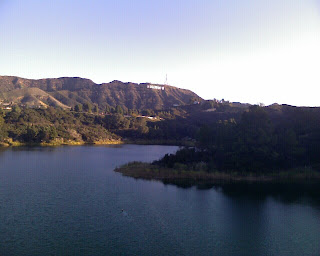 The view from my morning recovery hike to the Hollywood Reservoir, taken by my cell phone camera.
After running 20 miles this weekend, today is a rest day.
Posted by VeganHeartDoc at 11:57 AM 2 comments:

Many diseases, including coronary artery disease, hypertension, diabetes, and obesity can be treated and prevented by a plant-based diet.  This is a belief that I am passionate about and have seen in my daily work as a cardiologist.

The movie Forks Over Knives, which is coming out this summer, is based on the premise of diet as a treatment for disease.  It traces the lives of two important pioneers, T. Colin Campbell PhD of Cornell University and Caldwell Esselstyn MD of The Cleveland Clinic.  Both come from animal farming backgrounds, and yet both are strong proponents of plant-based diets.

View the trailer here
Posted by VeganHeartDoc at 8:46 PM 3 comments:

I love eating, and I loooove trying new restaurants!

One of my favorite blogs is quarrygirl.com.  When I think I've tried out just about every veg-friendly restaurant in LA, I go to her site and see all the neat places that I have yet to check out.

This is a great site if you want to eat vegetarian but aren't sure where to go.

There's a lot of Asian vegan food in Los Angeles.  But, Vinh Loi Tofu is unique -- the tofu and mock meats are made fresh on the premises every day.  In addition, owner Kevin Tran is a runner, training to run the LA Marathon next month, and will be doing his first triathlon later this year at Malibu.

Here are some of my favorite dishes:

Ham Spring Rolls -- my sister-in-law says they actually taste like ham.  I don't know about that because I've never eaten ham in my life, but they are delicious. 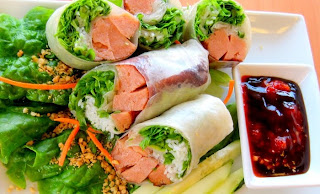 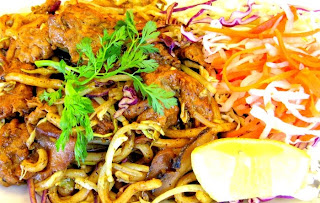 House Soup -- big enough for a small meal by itself, or great to share: 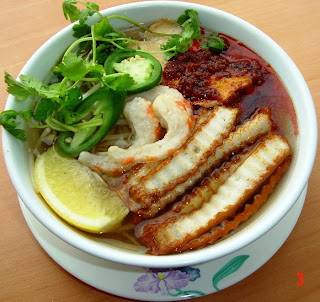 Tucked away in a strip mall in Reseda, you'd never expect to find a place like this -- but, as it's become well known, there's always a crowd.

A study from the February 1, 2010 issue of the American Journal of Cardiology demonstrates the benefits of making lifestyle changes with diet and exercise.

A group of patients with heart disease or risk factors for heart disease were asked to follow a vegetarian diet with less than ten percent of their calories from fat, get at least three hours of exercise per week, and practice stress management for one hour per day.  Another group received the usual standard care.

The patients who followed the vegetarian diet, exercised, and meditated had improved endothelial function or function of the lining of their arteries.  They also decreased their C-reactive protein and interleukin-6 levels, which are markers of inflammation which have been shown to be linked to heart disease.