Frequently, patients tell me that they feel they are taking too many medications, and in some cases want to come off of all of their medicines.

Remembering to take a medication can be challenging, and a prescription pill can be a stigma that a person is unhealthy.

I am a big proponent of patients taking as few pills as absolutely necessary.  I emphasize food as medicine, exercise and movement as critical for health.  So, for some, it may be possible to stop medications, with appropriate lifestyle changes.

One patient had a cardiomyopathy (weak heart muscle) which recovered, he switched to a plant-based diet, and at this point he no longer needs blood pressure, cholesterol or diabetes medications.

A man came to me in his late 30's after having quadruple bypass surgery.  He had a list of eight medications.  At that initial visit, I was able to streamline his medication list down to three, and now about five years later, he is only on two medications, an aspirin and a statin, the appropriate medications that anyone with coronary artery disease should be on.

That said, coming off of medications isn't necessarily an option, and should not be undertaken without a physician's guidance.  For example, a patient with a cardiomyopathy who stopped his medications on his own came back to me months later extremely short of breath due to congestive heart failure.  Or, a patient with uncontrolled diabetes and cholesterol and a history of a heart attack who "doesn't like medicines", this is not someone whose focus should be on stopping medicines, but rather on controlling his risk factors and regaining his health.

Some people should never be off of all of their medications, that simply isn't reasonable.  For example, type 1 diabetics don't produce insulin, and injecting insulin is their lifeline.  Or, a patient with coronary artery disease, whether he's had a heart attack or coronary stents or a very high coronary calcium score, he should remain on an aspirin and a statin likely for the duration.

It is possible to shorten a list of medications, or even come off of all medications entirely.  But, this needs to be done carefully and with thought, working with a medical provider.

Posted by VeganHeartDoc at 3:26 PM No comments:

I'm not training for anything right now.  Exercise is about being fit, on my own terms.  It's about working out when I want to work out, because I want to do it, not because I have a race to train for or a scheduled workout or time goals to achieve.

My neighbors have a huge avocado tree.  Based on the quantity of avocados that have fallen on the street, it seems that they do not like to eat avocados.  But I do, and I've been picking them up, rinsing them off, and slicing them into my salads for the past couple of weeks. 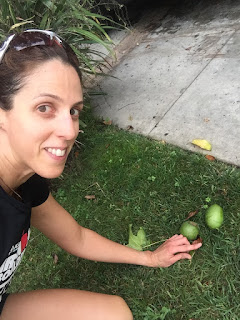 I hate to see delicious avocados go to waste!

If there were all these avocados just next door to me, how much available fruit could I find in my neighborhood?  So, today I decided to run with the goal of finding as much fruit as possible.

Now, normally I don't pay attention too much to the trees, or nature.  On a typical run I'm staring at my watch to see if I'm meeting my time goals or if my heart rate is in the correct zone.  Today my focus changed as I looked for fruit. 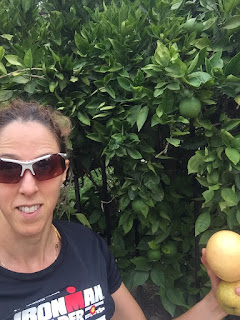 Once these oranges behind me become ripe, I'll be back!!!

I'm not sure how I never noticed the abundance of fruit, all of which is reachable from the street or sidewalk!!!  I found sweet grapefruit (as opposed to the sour grapefruit growing in my back yard and on most trees in the neighborhood), pomegranates, clementines, limes, pears, hachiya persimmons, and multitudes of oranges that aren't yet ripe.  I stopped at my house twice to drop off my haul, because I couldn't hold everything. 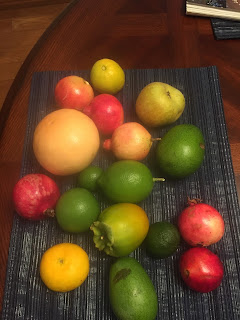 I love being able to change my focus from competition and training to just getting out and putting one foot in front of the other.  And, I love fruit.  Definitely a successful run today ;)
Posted by VeganHeartDoc at 11:05 AM 1 comment: