Mom and I whipped up this brunch in about 30 minutes: 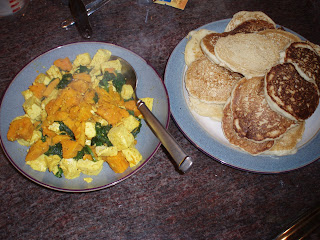 On the left is a tofu scramble with spinach and sweet potato.  I sauteed this in a wok, with no oil added, just some pepper, turmeric, and garlic.  On the right are pancakes made from the Aunt Jemima box mix -- instead of adding eggs, we used Ener-G Egg Replacer, a tapioca and potato starch egg substitue. 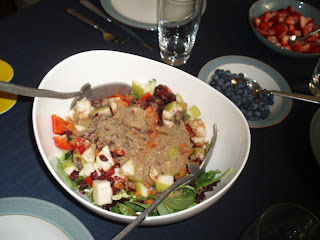 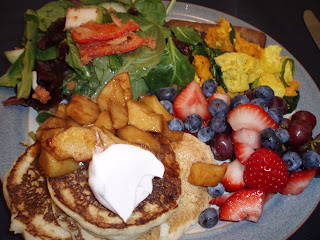 Growing up, and through college, med school, and internship, I drank plenty of regular pop/soda -- and I say pop because as a product of the Midwest, that's what it is -- pop, not soda.  As an intern on call, I carried a 20-ounce bottle of Coke in my pocket.

Sometime around the end of internship, as I thought about all the empty calories that I was getting from soda, I decided to give it up.  Since then, it's been a rare treat at a social event, limited to about four ounces, which is enough to fulfill my craving.

Then I started training for the Ironman.  Life became work, sleep, train, eat, work, sleep... you get the idea.  I was tired.  A cup of green tea was my pre-workout fuel, but then the Coke Zero can became a fixture on my desk at work during morning clinic.  I loved it -- the taste, the fizz, the caffeine, everything about it.  Next thing I knew, I was drinking nearly a liter a day of Coke Zero. 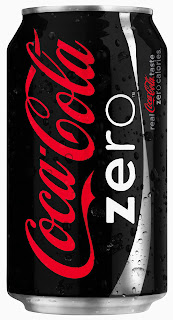 Now, I've read Skinny Bitch, and I know there's concern about aspartame.  And I know that putting processed crap into the body just isn't a good idea.  But I love this stuff.  I've cut back to one can, maybe two, per day.

A can a day can't be bad, right?  Not according to the most recent data on the subject.

A recent abstract presented at the International Stroke Conference this week suggests that heavy consumption of both diet and regular soda in patients over age 65 is associated with a 61% increased risk of vascular events, including stroke and heart attack.  The risk remained even after adjusting for other risk factors.

The study is not perfect -- it was a small observational study of 2500 patients at one site and looked only at older patients.  While diet soda consumption has been linked to diabetes and the metabolic syndrome, this is the first study to link soda to vascular events.

So what about a 35 year-old vegan triathlete cardiologist with a one-can-a-day habit?

As I look across my desk at the empty soda can, I think it's time to give it up.  I may continue to drink diet soda at social gatherings, but as a daily habit, it's just not necessary.