When I heard that Coney Dog, a Detroit-style hot dog joint, was opening up on Sunset Boulevard, I had mixed feelings.  It's always good to see my hometown represented in Los Angeles, but not as a restaurant that typically offers nothing for a vegan.

But.... when I heard that the place serves vegan hot dogs and vegan chili, I knew I had to try it out.  Tonight was the Detroit Lions' first appearance on Monday Night Football in ten years and seemed like an appropriate time to visit. 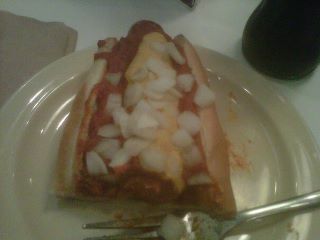 I had a California Jack.  Actually, I had two.  It's a vegan hot dog on a bun, topped with vegan chili, grilled onions, and mustard.  It's got a bit of a spicy kick to it, and it's good!!!  As the owners and their daughter worked the huge crowd filling the restaurant on this momentuous evening, one of the owners explained that they have a relative named Jack who moved to California and became a vegan, and hence the name of the hot dog.

You can also get several Detroit standards like Faygo cola (by the way, it's POP not soda), Vernors, and Stroh's beer.

Now, I'm not about to suggest that this is the healthiest food option around, but compared to a cholesterol-laden chunk of saturated fat that is a beef and pork hot dog, I'd say this is a pretty tasty choice.