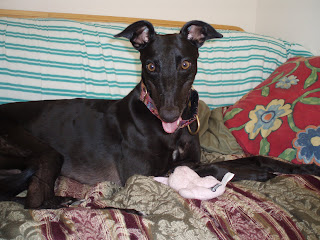 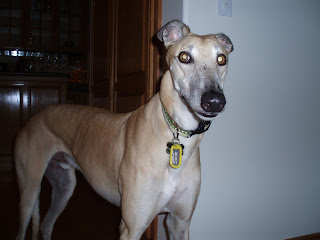 Gold
Curves and Gold are rescued greyhounds.  Bred for racing, they spent a year and a half as canine blood donors, and then another six months in a kennel waiting to be adopted.
They're beautiful and sweet dogs.  They are long time friends, and yet have completely different personalities.  Gold, a 6 1/2 year-old male, had a two year racing career in West Virginia, with several first and second place finishes.  Curves, a 4 1/2 year-old little girl, never raced -- at 51 pounds, she's tiny for a greyhound, and she'd rather play with toys, particularly those that squeak, than focus on racing.
Dogs are great to get us out the door.  They love to walk and run and play.  As for running, greyhounds are sprinters.  Kind of the opposite of me, the Ironman :)  At most they'll jog 3-4 miles, and the rest of the time they are couch potatoes.  Curves and Gold will jog about a third of a mile with me, and after that, they're done.  I'd love to build them up to a couple of miles, but for now, I just love throwing tennis balls to Curves in the backyard while Gold chases after his little doggie friend Curves.
And there's just something so wonderful about coming home to two friends eager to see you.  I feel like there's something about me that's just happier having them around.
Posted by VeganHeartDoc at 9:51 PM 6 comments:

I'm in the Sports Section!

From this week's edition of my hometown paper, the Detroit Jewish News.

Not bad for someone who was in "special gym" in elementary school for being unable to stand on her right foot, or the girl who gained twenty-five pounds during freshman year of college from being sedentary and eating too much junk.  I am proud to say that I've come a long way.
Posted by VeganHeartDoc at 8:08 PM 3 comments:

There's a great deal from Gobble Green.  For those of you in the Los Angeles area, they'll deliver a week's worth of food -- that's seven days worth of food, three meals a day -- for $99!  An amazing deal.  And the food looks delicious.

The deal is only good for two more days.  Get your Gobble Green food delivery today!!
Posted by VeganHeartDoc at 4:26 PM No comments:

Every so often, one of the journals will publish a study trying to compare a low-carbohydrate diet such as Atkins to a low-fat diet.

Last week's Annals of Internal Medicine had a comparison of patients following either diet for two years.  Weight loss at two years was about the same, but on a few parameters, such as change in HDL, the low-carb diet was superior.

There are a few problems with the study.  First off, low-fat was defined as 30% or fewer calories from fat.  30%?  Really?!  I would hardly call that low-fat.  Also, there's nothing stating what people actually ate.  When people in previous studies have been told to consume 30% fat, their fat intake actually hovers around 36%.  That's definitely not low-fat.

If you look at Dean Ornish's studies on low-fat diets in patients with coronary disease, the fat content prescribed is 10%, and those patients had overall regression of their coronary disease and improvement in their lipids, even in the absence of statin medication.  Perhaps 10% fat is challenging for most to obtain, but I think 30% is way too high to be called low-fat.

Look closely at the patient populations of the low-fat versus low-carb studies such as this one.  They're overweight but remarkably healthy.  They don't have diabetes and aren't on statin medications for cholesterol.  Their blood pressure is under pristine control.  And of course they don't have coronary artery disease.  These are characteristics vastly different from the general American public, and a huge departure from the typical patient whom I see in my office.

Here's my problem with the concept of the Atkins low carbohydrate diet:  We weren't designed to eat that way.  Think back to our predecessors who dwelled in caves.  They didn't eat huge quantities of meat.  And admittedly, they weren't vegans either.  They ate the little meat that they could hunt down, catch, and kill.  There was no McDonald's drive thru or a supermarket meat counter to buy a prepared slab of meat.

I just found this, and thought I had published it.  Perhaps not.  Better late than never -- it was written back in May.
Worldfest, a celebration of all things vegan, took place today in Encino.
There were lots of food vendors and yummy things to try. I enjoyed Olade, a low-calorie drink (20 calories per 8-oz bottle), and in particular their Tropical flavor. I promptly went to Whole Foods afterward and picked up several bottles. Rawsheed had great raw pizza samples, and this was an amazing introduction to his very creative line of raw cuisine.

For dinner, I needed something unique. So I hit up Strictly Vegan, a Jamaican catering company out of Rancho Cucamonga: 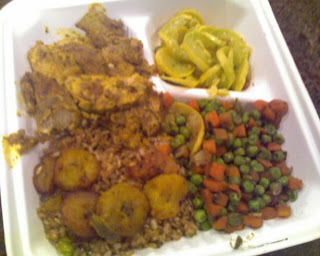 This was a spicy treat!  Gardein vegetarian chicken with peas and carrots, squash, rice and plantains.

And of course there were the speakers.  Rip Esselstyn was speaking as I came in.  He's the firefighter behind the book The Engine Two Diet, and the son of famed cardiothoracic surgeon Caldwell Esselstyn.  His talk basically can be summarized as:  It's not about curing heart disease -- it's about eating the right things and taking care of your body so you don't need a cure.  Amen to that -- the message that I try to get across to my patients on a daily basis.

And finally, after Ironman Lake Placid when I have more time, I want to adopt a dog.  I spent a lot of time talking to the folks at CalGAP, California Greyhound Adoption Promotion, who promote adoption of ex-racing greyhounds.  I asked them important questions like, with a doggy door can I leave a Greyhound when I'm at work?  Will the dog go jogging, and how far?
Posted by VeganHeartDoc at 9:50 PM No comments:

The knee felt great.  On Sunday, I ran a half mile warmup before lifting some weights.  So, on Monday, it made sense to run five miles.  On concrete.

I then proceeded to limp for the next two days.  But I listened to the advice I give my patients:  If you can't walk, then get in the pool.  So I got in the pool and I stretched and I swam.

The knee still aches, but it's better.  I know I need to not run for at least two weeks.  And this bums me out, and I could sit and stew on it and be mad.

Or I can look at it in a more positive way:  Here are all these days when I would have run, and now I have the opportunity to do something else.

Yesterday, I climbed up and down Sepulveda Boulevard for an hour on my bike.  That was fun.  Tomorrow morning I'm swimming in the open water.  On Sunday, a friend and I are doing a dance class.

It's all in how you look at things.  Were it not for an injured foot six years ago, I would have never dusted off my old mountain bike and I certainly never would have jumped into the pool to brush up on my freestyle stroke, and I never would have done my first triathlon, let alone the Ironman that I completed less than three weeks ago. 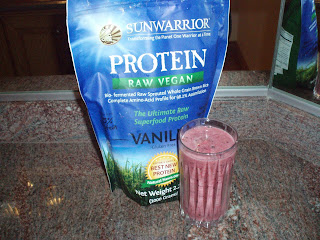 I tried a new protein powder -- Sun Warrior Raw Vegan Protein, in vanilla.  It has 70 calories per serving with 16 grams of protein.  The number one ingredient, interestingly, is raw sprouted whole grain brown rice, and according to the label it is one of the most easily digested proteins.
And yet, it tastes terrific!  I've mixed with soy yogurt, and this evening I made a smoothie with one scoop of vanilla Sun Warrior, one cup of strawberries, half a cup of blueberries, and a cup of ice. 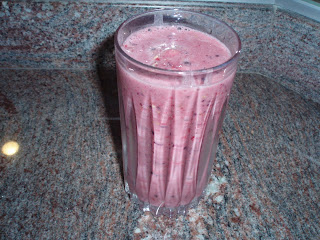 At 200 calories, this smoothie is very filling.
Posted by VeganHeartDoc at 10:26 PM 3 comments:

Ironman -- The Day in Pictures 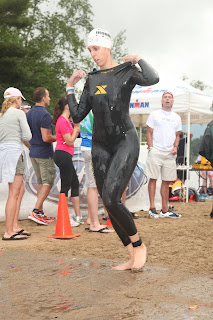 Out of the water after two miles, pulling my wetsuit off. 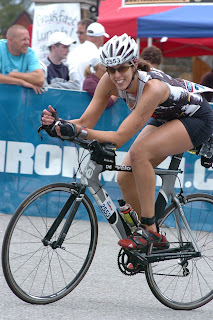 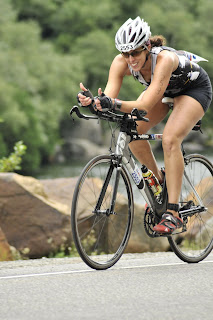 Beautiful scenery on the ride.... 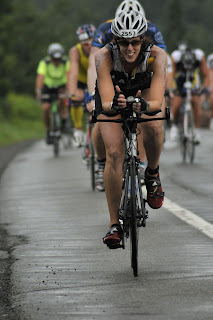 Leading the pack!  Okay not really, but the picture sure makes it look like I am. 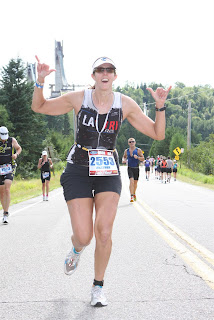 Running the marathon.  Having fun. :) 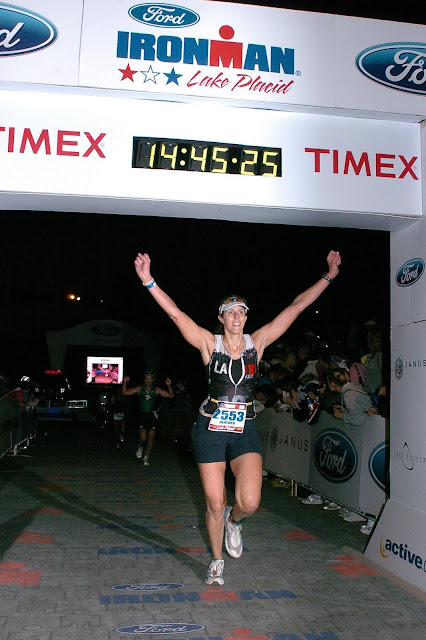 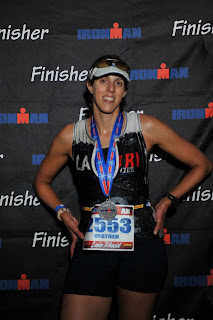 Limping on an excruciatingly painful knee, and somehow couldn't get the grin off my face.  I'm an Ironman!!!!!
Posted by VeganHeartDoc at 9:33 AM 5 comments:

It's been ten days since Ironman Lake Placid.

To answer the question I've heard the most:  How's the knee?  -- It is still sore.

I took off the two days following the race from exercising.  I was traveling, but my knee still hurt, and it's hard to exercise while limping.

I've worked out every day since.  I have taken it easy though.  I've swam a few times, went to a spin class, got on an elliptical, and even took a choreographed dance class.  It's been really interesting being without a coach and a schedule.

On Sunday, I tried to run.  I had been pain-free in my knee for two days and thought I could do it.  Nope.  About three quarters of a mile in, it hurt.  It hurt worse at a mile so I turned around.  A mile and a half into the run, I had to walk.

While nothing would make me happier right now than going for a run, I know that I can't.  I've learned from past experiences that ignoring minor injuries turns them into more major injuries that will keep me out of running for even longer.

I've changed the focus of my training.  Rather than focusing on endurance, I'm focusing on bodybuilding.  I'll be weight training five days a week.  I've never done this before, but I look forward to the challenge.
Posted by VeganHeartDoc at 10:26 PM 1 comment:

One of my new favorite shows is "Losing It with Jillian Michaels," and one of the points that she makes is that your food can be the poison that kills you, or it can be your medicine that makes you healthy. 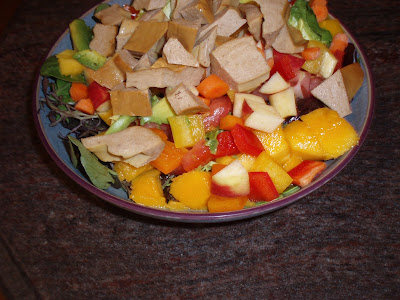 I love to eat.  Over time, my diet has evolved from grilled cheese, fries and coke, to far healthier choices.  Needless to say, salad was not always part of my repertoire.
Above is one of my favorite salads.  It's healthy too.  On a bed of organic lettuce, I add some of my favorite veggies, like carrots and peppers, slices of fruit like mangoes and apples, tomatoes, avocado, and 150-200 calories worth of protein like lentils, marinated tofu, Field Roast, or Chick'n-free Chicken from Follow Your Heart.
I don't add salad dressing.  Rather, I let the salad marinate in the tomatoes and fruit, and no calorie-laden dressing is needed.
I get my organic lettuce and bulk veggies and fruit at Costco.  Or I buy from local farmer's markets.  Trader Joe's has marinated tofu or lentils in their refrigerator section, and Follow Your Heart in Canoga Park (if you live in LA) has lots of "fake meat" options, including my favorite, Chick'n-free Chicken.  Field Roast, a soy-free "grain meat" sold at Whole Foods, has a meaty texture and tastes great sliced in sandwiches, cubed in salads, or cooked with veggies and mashed potatoes.
Posted by VeganHeartDoc at 11:43 AM 2 comments: