Eating processed meats significantly increases the risk of cancer. This is fact.
I was very excited to hear about The Cancer Project's new commercial, which dramatically makes the public aware of this link.
And I'm fascinated by the public outcry over it. It seems as if people don't want to hear the truth, as if it is heresy to let people know that a traditional American food causes harm.
Not only does processed meat, in the quantities that the average American consumes it, increase risk of cancers, it also increases the risk of obesity, raises cholesterol levels, raises blood pressure, and as a result increases the risk of coronary disease, heart attack, and stroke.
Yes it's alarming, but people need to hear this message loud and clear.
Watch the commercial here.
Image from hankblog.wordpress.com
Posted by VeganHeartDoc at 3:51 PM 5 comments: 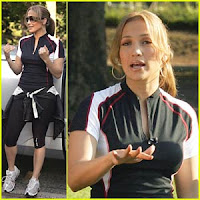 Jennifer "J-Lo" Lopez will be racing the Nautica Malibu Triathlon on September 14. While I am disgusted by her love of wearing fur, it is neat to see a celebrity drawing attention to our sport.
Photo from justjared.com
Posted by VeganHeartDoc at 9:57 PM 7 comments:

After my foray this past year into olympic distances and a half ironman, I decided to take a step back and do a sprint triathlon.

The swim: 500 meters. Small inland lake. Water felt like bath water. Because of the temperature and the short distance, I chose to go without a wetsuit, a decision I do not regret. The start was crowded -- for some reason, all women 39 and under started at once, and the older women, 40-49 and 50+ each got their own waves to start in. I'm a little jealous, but I guess age should come with some privileges. I swam a bit off course and had to swim back around a buoy, maybe losing 10 seconds. My time out of the water was about 13 minutes.

Transition 1: I've been really focusing on getting my transitions better, trying to take a few extra steps out. I removed the strap on my sunglasses in advance. So, run to bike, put on bike shoes, put on bike helmet, put on sunglasses, wish good luck to guy I know in transition, and run out with bike. Bam bam bam.

The bike: 11 miles, relatively flat. Coach Jamie said go hard because it's a short race, don't save energy for the run. So I pushed myself. I passed a lot of people on mountain bikes and a few on road bikes. A lot of people passed me too. But hey, the bike is not my forte. There was one sharp turn where the woman next to me nearly took out my bike. My pace ended up being about 17-18 mph. For me, that's good.

Transition 2: Another area I've been working on. Before dismounting the bike, I un-velcroed my shoes and pulled my feet out. So once I dismounted, I could run faster with bare feet than with my clumsy bike shoes. Helmet off, right sock on, right shoe on, left sock on, left shoe on, and this time with thinner socks that are easier to pull on than my usual thick socks. Grab visor and run. But, boy did I have to pee! So I made a quick pit stop at the port-o-potty. It took me 20 seconds to do my business. As I dashed out, someone yelled to me, "Quickest transition port-o-potty stop ever!" Funny.

Run: The phrase that I always repeat to myself during the run is "Mind Over Matter". I really think the run on any triathlon is as much mental as it is physical. It's the point of the race where our bodies are tired from swimming and biking, and we have to find it in us to efficiently use all the energy that's left in us to finish those last few miles. The trail run was for the most part flat, though there were a couple of slight hills. At the end was a rather short, steep hill. My heart rate shot up to 194. Mind over matter, keep going. And I just pushed to the finish. Average run time: about 9:15/mile.

These are my measurements. Official times have yet to be posted to the internet. But I'm really happy with how I did. Probably my best sprint tri ever.
Posted by VeganHeartDoc at 12:16 PM 3 comments:

Another Reason Why Meat is Unhealthy

The salmonella bacteria that infected crops of tomatoes was derived from contaminated meat. Somehow, this fact gets missed in the mainstream media cover of the salmonella outbreak that caused over forty thousand people to become ill.
Photo courtesy of Physicians Committee for Responsible Medicine, PCRM.com

Posted by VeganHeartDoc at 8:05 PM 6 comments: