Chef AJ is one of the most interesting people you'll meet.  At the beginning of her classes, you will hear "I Will Survive," with her own singing and lyrics, dancing, and even a handstand in front of her food processor as she sings (yes sings!) about the benefits of whole, plant-based foods. 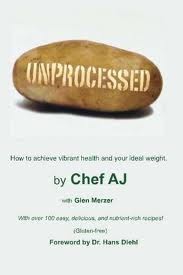 While her teaching methods are certainly unorthodox, her message is clear:  Processed foods are unhealthy, and following a whole-food, plant-based diet is not that hard.  And, if you can't get to one of her classes, you can read her book, Unprocessed.

Chef AJ talks about the many challenges she has faced in her life -- eating disorders, a miscarriage, and a health scare -- that led her to the way of eating that she so passionately preaches.  As she says it, on page 2:

It's simple, but it makes sense.  Not only does she tell you how to become "unprocessed", but she includes several of her simple yet delicious recipes.  An invitation for dinner at AJ's house is one I'll never turn down, because I know I'll get healthy food that tastes incredible.  Her recipes are straightforward, and I've made several of them, including a couple that I've blogged about.  My favorites are her Hail to the Kale Salad (page 122) and Chef AJ's Disappearing Lasagna (page 100).

If you're looking to improve your diet and get healthy, this book is for you.
Posted by VeganHeartDoc at 9:29 PM 3 comments:

I've raced this three times, and this was my best performance.  But I could have done better.

If something could go wrong during the week leading up to the race, it did.  You can read below about my misadeventures in the ocean from last Sunday.  That managed to truly screw up my left shoulder, and on the following day while swimming with my niece I felt pain with every single stroke in the water.  Then shortly thereafter I got sick with a cold.  Coach Gerardo basically had me stop working out, which of course was the right thing to do, but when I go from my usual daily exercise to zero exercise, my mood changes and I feel like a sloth.

On Sunday, my shoulder still felt a little funny.  I joked that the worst case scenario would be that I would do a 1.2-mile one-armed drill.  Or, since the Russian River, where the Vineman swim takes place, is so shallow, I could walk the whole thing.  And, though I felt better from my cold, I was still bringing up some funky-colored mucus.

Swim
My goal was 40 minutes.  The swim start was a mess as usual.  The shoulder felt a little funny at first, but any discomfort was gone within ten minutes.  I finished the swim in 39 minutes.

Bike
My weakness.  I was consistent, but I got passed all over the place.  One woman in my age group decided to pass me on the right.  When I suggested that was unsafe, she yelled "Bitch!" at me.  I love our sport most of the time, but such unsportsmanlike conduct is just unnecessary.  I have never had so much snot come out my nose during one bike ride.

Run
I'm a decent runner, and in a sprint or olympic race I can fly by dozens of people on the run.  But, my runs during my last few long races have been less than stellar.  Coming out of T2, I felt great.  I ran the first mile at what felt like a comfortable pace, which ended up being 8:50.  Mile 2 was completed in 9:30.  Mile 3 was 10:00.  And my mile splits got worse from there.  I didn't feel tired, but my pace fell.  The balls of my feet hurt like hell, especially running the trails around  the vineyard.  Gradually, as we got back onto solid pavement and downhill running, the feet hurt less.  Then my stomach began to grumble.  For those of you who don't know, distance running increases gastrointestinal motility.  My stomach grumbled more.  Then, around mile 11, I made a rather urgent port-o-potty stop.  Thereafter, my stomach felt so much better, and the last two miles flew by.

I was grateful to see Fortius teammates Mike, Karen, Joe, and Ray just around the corner from the finish line.  Their encouragement really pushed me, though I had to ask Joe and Ray to stop running with me so I didn't get disqualified for outside help.

My Finish Time:  6:27:08.
That's eight minutes faster than my previous attempt at Vineman 70.3, and my best half Ironman time ever, all in spite of still being sick and injuring my shoulder.  I wanted to go 6:15, and under better conditions, I could have done it.  But I also want to troubleshoot my run, why I'm so much relatively faster running a shorter course than I am on a longer course.  That will come next season -- I'm done with long course triathlons for the year.  I have two shorter races, Hansen Dam and Malibu, and plan on running a fall marathon.
Posted by VeganHeartDoc at 10:07 PM 2 comments:

I'm No Chicken of the Sea

The ocean is a funny place.  Some days it's quiet, and then without warning it's not.

I have a race one week from today, Vineman 70.3, which is a half-ironman distance race.  At this point, as my coach likes to remind us, you can't do anything to make your race better, so now is the time to taper and be ready for race day.  To that goal, I had a 45 minute open water swim on my schedule for today.

The "Chicken of the Sea" swim with the LA Tri Club takes place at 8:30 am on Sunday mornings.  It is called "Chicken of the Sea" because the location is sheltered by the Marina, and is considered ideal for those who are nervous about waves in the ocean.  We swim north toward the Venice Pier, about a mile away.

Now, I'm no "Chicken".  I've lived in Los Angeles for four years and during that time have done numerous ocean swims.  I join the Tower 26 group every Wednesday morning during the summer, where we practice entering and exiting over and over again.  I was on call until 9 am, so I entered the ocean a bit later than everyone else, so I was swimming alone.  But, I did see a member of my team there and said hello to him at the start, so that someone knew I was there.

I entered alone and swam alone, though there were several swimmers in the area.  The water was a bit wavier than usual.  I did my swim on my own.  I kept it at a leisurely pace since I have a race coming up next week.  It was uneventful.

About forty minutes later, just a few hundred yards from the Venice pier, I prepared to exit.  Initially, the water was pretty flat.  And as I headed to shore, I swam looking behind me periodically so I would not be surprised by any major waves.

A few hundred feet from shore, a rather tall wave approached.  I'd say it was about six feet high.  I prepared to dive under it.  As I dove under, I got caught in the wave and was dragged forward.  My left arm twisted and I felt it pull hard.  I think I was dragged to the floor and it felt like eternity before I came up again.

But as soon as I could stand up, another big wave came.  Barely having caught my breath from the previous wave, I tried to dive under, but similarly, I was dragged with it.  And I stood up again coughing, not sure which direction I was facing.  Another wave was coming.  I thought I was in front of a lifeguard tower, but might have been dragged in one direction or another, because I didn't see the tower any more.  I could barely speak but I put my hands overhead hoping to get attention from someone on the shore.  But I didn't get a chance as another huge wave pounded me.  As I was dragged underwater this time, I lost my swim cap and goggles.

I was absolutely wiped out, gasping for my breath.  Again I put my hands overhead and yelled "Help!"  I have no idea how loud I yelled.  Probably not very loud.  Unfortunately, I didn't get anyone's attention.  Fortunately, the waves calmed down and I was able to get to shore.

I sat down on the sand, heart still pounding, still gasping.  As I sat there, another club member came by, and asked if I was ok.  I was calm by then, and I walked with him back to where we had started our swim.

In the end, I have a strained left shoulder and right groin muscle, which seem to be calming down after I iced them.  I had a throat full of sand, my ears were packed with sand, and even hours after this adventure, whenever I lean foward salt water and sand drain out of my nose.

The ocean and I need to spend some time apart for now.

My lesson from today is that even if I know people at a swim, I can't be swimming alone, even if I am experienced.  Another swimmer with me might have been able to pull me in when I tired out, or could have been more effective at getting the attention of a lifeguard.

The other lesson is that no matter how calm the reputation of the water where I'm swimming, conditions can change, and I need to be ready.
Posted by VeganHeartDoc at 4:30 PM 1 comment:

There are a few statements when it comes to food that I have issues with:

"Don't eat carrots.  They have too much sugar."
How many people are too heavy due to eating too many carrots?  If carrots are the true culprit of your diet, then you eat far better than I or anyone else does.

from askfreud.com
"I avoid pasta and bread."
There's no need to avoid bread and pasta.  Stick to whole grains.  And remember what a portion size is -- 3/4 of a cup of dry pasta, or 56 grams, is 210 calories.  Measure it out.  You'd be surprised how small it is compared to a standard restaurant serving size of pasta.  And, when you go out to dinner, stay away from the bread basket, especially if you are getting a pasta dish or meal with bread  in it.

from walldesk.net
"I don't eat red meat.  I eat lots of chicken and fish."
I wrote a whole post on this subject.  An animal is an animal is an animal.  Why should an animal of one species be so "good" for you an another be "bad"?  Beef, chicken, and fish have the same quantities of cholesterol.  And, lean beef and chicken have similar quantities of artery-clogging saturated fat.  So, if you really want to do yourself a favor, cut back on or get rid of the animals from your diet.
Posted by VeganHeartDoc at 8:15 PM 6 comments: