Former President Bill Clinton, once known for his trips to McDonald's while in the Oval Office, has gone nearly vegan.

He underwent coronary artery bypass grafting surgery in 2004.  He then had an angioplasty of one of his vein grafts in February 2010.  Here, he talks about why he changed his diet:

I wish him the best -- it sounds like so far he feels great and has lost some of the excess weight that he was carrying. I also hope that the publicity of someone as prominent as him switching to a plant-based diet inspires others to be healthy.
Posted by VeganHeartDoc at 8:50 PM 4 comments:

End of a Season

Wildflower Long Course -- 7:39:25, not a good race, 28 minutes slower than last year, much due to lack of sleep in the days leading up to the race

Ironman Lake Placid -- 14:45, hitting my goal of finishing my first Ironman in under 15 hours, and screwing up my right knee in the process

Malibu Classic -- 2nd place Athena, on a screwed up knee and basically no running for seven weeks 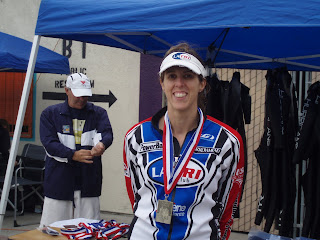 Long Beach Tri -- today -- ending the season -- FIRST PLACE ATHENA!!!!  Had I raced as an age group athlete, I would have taken fourth place.  But, I'll use my size advantage while I have it :)
Posted by VeganHeartDoc at 9:43 PM 1 comment:

Was I Supposed to Train for this Race?

It's been a crazy five years.  Five years ago, I spent an entire summer training for a sprint distance triathlon.  On Sunday, I raced the Malibu Classic triathlon seven weeks after completing an Ironman, and on no particular training schedule.

I didn't think about it until a friend talked about his "taper" for the race.  And it came to me -- Was I really supposed to train for this?

Life since Ironman has been more mellow.  I've been focused more on weight training, lifting five days a week, which I've never done before.  I've been swimming twice a week with the Fortius coached swims, cycling when I feel like it, and running hardly at all due to a slow-to-recover tendinitis in my right knee.

Actually, let me be more honest about the knee issue:  I'm stubborn.  I was told not to run for two weeks after the Ironman.  I ran in one week.  Bad idea.  Then I ran five miles on concrete a week later.  That was a worse idea that led to me limping for the next three days.  Gradually it's gotten a bit better but I've tried a few times to increase the running and it has not worked.

In total, I've run less than fifteen miles in the seven weeks since Ironman.  So why not go out and run four miles at the Malibu Classic?  Sure!

The knee was bad all week before Malibu.  But I had already paid big $$$ for the entry and the race is more like a social hour than an actual competition.  Or at least that's how I treat it.

The water was ice cold -- 58 degrees.  While warming up, or shall I say freezing in the water, I contemplated skipping the whole thing.  I hate cold water.  And with my knee not behaving, I had no idea if I could even complete a four mile run without excruciating pain. 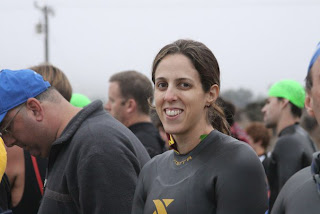 You really want me to swim in this ice cold water???
My swim was strong.  I knew I was doing well since I was surrounded by swim caps from the previous wave of athletes.  Running on the sand out of the water led to excruciating knee pain.

There was only person at the Athena bike rack, and the rest of the bikes were still there, so I figured I was in second place.  Number one took off, and I was about a minute behind.  Putting on a knee brace took another twenty seconds in transition.

I decided that my bike strategy would be to haul ass -- my run is usually my strength, and with my knee in the condition it is in, I had no idea how slowed I would be by the pain, or if I could even *finish* a four mile run.  Dropping out was a definite possibility, so I might as well just kill it on the bike.  A couple miles into the bike ride, I saw another rival with the "ATH" on her calf.  She passed me, leaving me at #3.  I then passed her on a climb.  And she passed me again.  We chatted -- I told her that I thought she and I were #2 and #3 and that I'd see her on the podium. 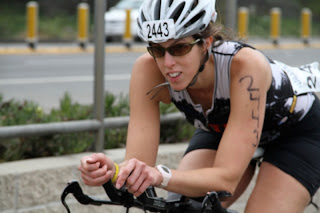 She and I leapfrogged positions on the bike.  Shortly after the turnaround, I passed #1 who was struggling on the climb out of Leo Carillo beach.  But, the other girl was ahead of me, so at this point I thought I might be #2.  At the time I didn't know it, but there was another Athena out there ahead of all of us.

My bike-to-run transition is a little longer because I don't ride a bike in socks, but I have to put on socks to run.  I was surprised to find another Athena at the rack putting her shoes on to run.  And, the girl who led initially passed me in transition, and I passed her about 30 seconds into the run.

Surprisingly the knee wasn't all that bad.  It hurt, but it was a consistent, moderate ache that didn't seem to get worse.  I came upon another "ATH" on the run who I didn't even realize was out there.  I passed her.  I passed a lot of runners, and as it turned out, my pace was about 9:10 per mile, where a year ago it was 8:30.

I found my new friend from the bike ride.  I figured we had podiumed, and my guess was that I was third place.  I was wrong... 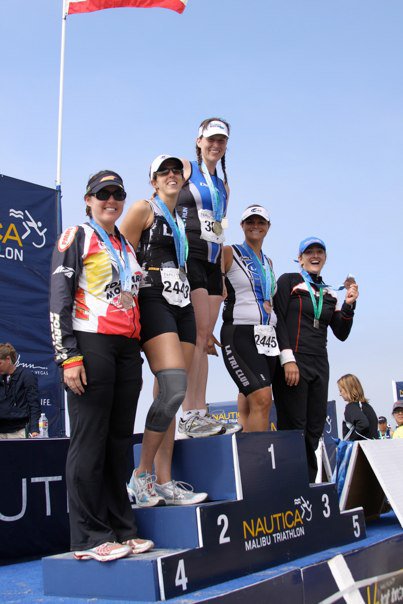 Second place on the podium, rockin' my stylish knee brace.
It feels great to be on the podium, and a great birthday present to me :)
Posted by VeganHeartDoc at 9:30 PM 1 comment: