I host a seder at my home every year.  I guess at this point I can call it every year because this is the third year in a row.

Passover seder was always a time for family to get together.  Growing up, seder was me, my brother, parents, and all four grandparents, and sometimes family friends or other relatives.  Mom would make food for at least one of the seders, and it was always a big production of amazing food, including her traditional cheesecakes.  Unfortunately, Mom and Dad still live in Michigan, so I took on the tradition of making seder in California.

Two years ago, I thought about having a seder for my family in California, namely my brother, sister-in-law, and my three nieces, and maybe a couple of other random friends who didn't have a seder to go to.  And I thought, a vegan seder is something pretty unique, I'm not sure people will want to do that.  That small seder became twenty people.  Last year, I had twenty-five.  This year, I bought an extra table to accommodate my twenty-eight guests -- I want everyone I know to have a seder to go to.  And, while a few of my guests are vegans like me, most are not, which presents the challenge of showing them a filling seder dinner that doesn't include any eggs or brisket.

We had a good time -- we told the story of Passover.  I'll admit we didn't do the second half, but I'm okay with that.  My niece Samantha read the four questions and helped to demonstrate the plagues.

I prepared the majority of the food myself.  This year, everything was kitniyot-free.  It is traditional not only to not eat risen bread during Passover, but also not to eat items that in the old days could have been mistaken for bread, such as soy and rice.  (That said, during Passover, I do eat soy, but that's a whole different subject)

Appetizers were a mock chopped liver made from mushrooms, walnuts, and onions, and Sabra eggplant spread.

These are my matzah balls for the soup.  In the past, I've made the Post-Punk Kitchen matzo balls, which are a bit labor intensive, though delicious and fluffy, but also are made with tofu.  This year, I chose a recipe by Nava Atlas, a matzo ball made with quinoa flakes and matzo meal, and a little bit of oil.  Instead of dropping them in hot water, they are baked.  They taste amazing, and while they are not fluffy like your traditional egg-laden matzo ball, they hold up quite well in the soup and do not fall apart. 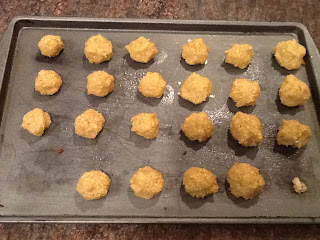 Spring salad -- most of the veggies in here are from the farmers' market.  Greens, cucumber, tomatoes, carrots, mango, and cinnamon almonds. 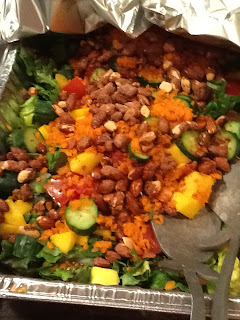 Quinoa with cauliflower, pine nuts, and dried cranberries.  I made this last year and people enjoyed it, so I made it again. 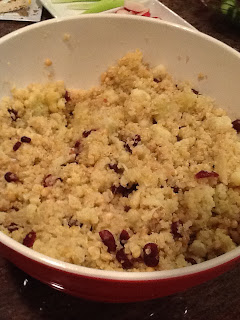 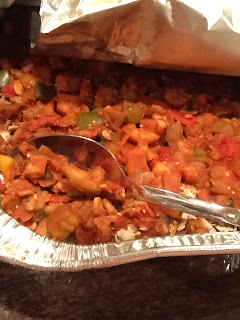 Matzo farfel in butternut squash puree.  This is my own creation.  An Italian restaurant made me a pasta in a butternut squash puree. It was amazing, so creamy and yummy, that I assumed they must have slipped in some dairy or butter.  But they insisted, it was just pasta, pureed butternut squash, salt and pepper.  So I tried it at home and it worked with pasta, so I figured it must work with matzo too.  And it did! 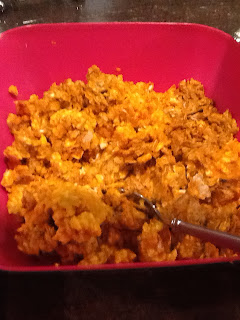 The most popular dish, and unfortunately a kind of crappy picture of it.  Carrot apple sweet potato kugel.  The recipe suggests adding sugar.  I don't.  I also cut the margarine down to a third of what is called for in the recipe. 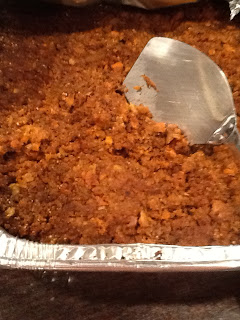 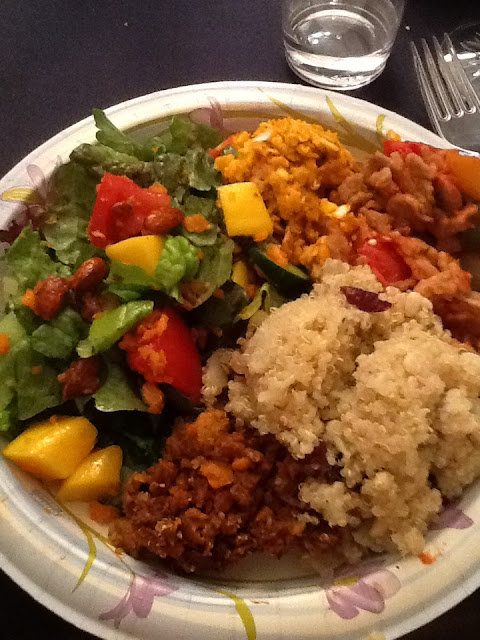 Dessert was an apple and date mouse and a chocolate truffle pie from Mayim Bialik's blog.  P.S. Mayim, thanks for the awesome recipes, if you ever read this.
Posted by VeganHeartDoc at 9:42 PM No comments:

I will be competing in the Maccabi Games this summer as part of the US Masters Triathlon Team.  In fact, I'm the team captain!

Please click here and learn how you can support the games and help me reach my fundraising goal.

Thanks!
Posted by VeganHeartDoc at 9:09 PM No comments:

My first triathlon of the season was this past weekend near Palm Desert.

I didn't have high expectations.  I took two months off -- after my ultramarathon at the beginning of December, which had followed a DNF at the Santa Clarita Marathon, I needed some clarity.  I needed to workout on my own terms -- if I wanted to run, I ran.  If I wanted to ride my bike, I did, but not very often.  And when I decided that the pool and I needed to break up for about six weeks, I did that.

So, official training started on February 1.  Most of that initial training was for the Bandit 30k on February 18, a crazy hilly course with 3,700 feet change in elevation.  And that race went okay, given my lack of training.  But, going into Desert Tri, I had done a total of three brick (combined bike and run) workouts, all crammed into the two weeks before the race.

I did not feel ready at all.  That said, who is really ready for a triathlon at the beginning of March, so early in the season?  Me, apparently.  But, my thought process going into this was that this would be a good practice run, and a great day to compete with other teammates from Team Fortius. 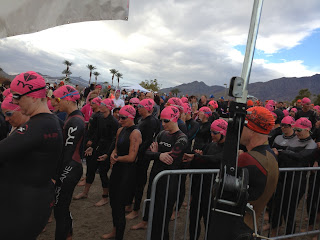 This is what a triathlon looks like seconds before the gun goes off.  A bunch of black neoprene clones in identical caps.  I'm in that picture, if you look closely, and you'll see a sliver of my face.   I lined myself up in the middle, a bit closer to the front.  I'm not the fastest swimmer, but I've done enough triathlons to have the confidence to hold my own and not get scared by the mass of swimmers around me. 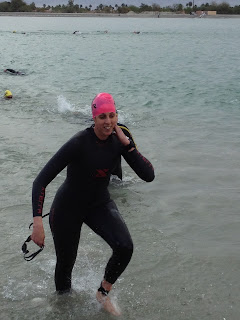 And that's me running out of the water.  Normally I step out of the wetsuit, but for some reason I actually sat down in the transition area to pull it off. 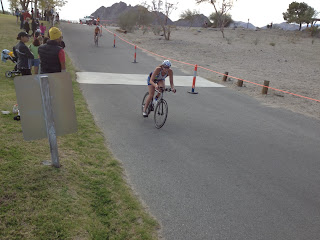 Reeeally far out shot of me on my bike﻿

Then on to the bike.  Mr. Cervelo (my tri bike) and I just became reacquainted less than 2 weeks ago, so expectations weren't very high.  But I had something new -- race wheels.  I had tried them out at Malibu Tri in the fall, but hadn't noticed much difference, possibly because of the hilly course there.  But Desert Tri was flat -- like a desert!  I looked down at my bike computer -- I was cruising at 20 mph!  For me this is unheard of.  But, I went with it.

Finally the run.  Normally, I have no probleml putting my bike down and running full force.  But, my legs felt heavy, heavy enough that I didn't even want to know my pace.  As it turns out, I was running 8:35/mile pace, which for me is pretty good, but for some reason, it felt slower because my legs were so uncomfortable.  I was grateful to have a friend out there who was not taking the race too seriously, who ran with me for the first five miles.  I have a strategy when running with someone faster than me -- make them talk.  Ask open-ended questions.  Hear stories.  That way, I can focus my energy on running, not on talking, and listening to them I can forget the discomfort that comes with running hard. 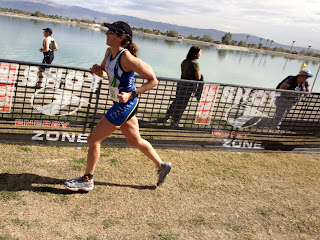 I am pleasantly surprised by my performance.  The swim was in a time I would expect, my bike was faster, and my run was about spot on.  This is a good start for my season, which will culminate with the Maccabiah Games at the end of July... more on that later!

And finally, a big thank you to my friend Anthony, who was kind enough to be my sherpa for the day, put air in my tires, and take iPhone pictures. 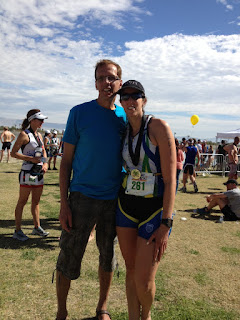