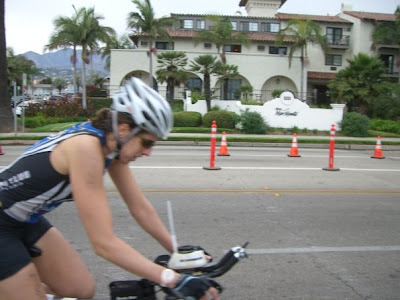 A friend snapped this picture at the beginning of the bike course. I'm out of focus, which is ok, because you can see that the scenery along the bike course was really beautiful.
Posted by VeganHeartDoc at 9:40 PM 2 comments:

My season was essentially over, with two small races to go. And then the e-mail two weeks ago from Jessica, with whom I travel to most of my races, which began...

Next thing I knew I was signed up for the Santa Barbara Long Course Triathlon. With less than two weeks until the race -- 1 mile swim, 34 mile hilly bike, and 10 mile run -- I knew I had the fitness base to do it, but also realized that this would not be an "A" race.

It is also late in the season. I find it harder and harder to get to the pool and go swim. So I haven't been to the pool lately, and my swim training has consisted of an ocean swim each week of no longer than one mile. Biking is always fun, and I've continued to ride hills. But as the fall approaches, I've focused more on my running to prepare for fall marathons. So my training for race day wasn't exactly ideal.

The swim was in ice-cold water. Halfway through, my hands and feet feeling like icicles, I just wanted to quit. I trudged through it and could not have been more glad to be running on the sand pulling my wetsuit off and heading to pick up my bike.

The bike was fairly hilly, but certainly not nearly as challenging as the hills of Wildflower earlier in the season. I dropped my bike chain about a mile into the ride. After what happened last year, there were a lot of people on the course cautioning us on the descents to be careful. My ride wasn't fabulous -- I got passed all over the place.

Lastly was the run. It was an out and back. The first two miles were flat, then miles 2-4 were all uphill. I love the run. For me it's the opposite of the bike. I get to pass people. On the entire run, I passed dozens of people, but only two passed me, and one was a man who I'll bet had a flat tire. My run time was pretty good -- 1 hr 31 min 30 seconds -- about 9:10 per mile.

One more triathlon, or maybe two, I may be racing with a friend who is doing his first triathlon.
Posted by VeganHeartDoc at 10:25 AM 1 comment:

Consumption of meat increases the risk of cancer and heart disease. 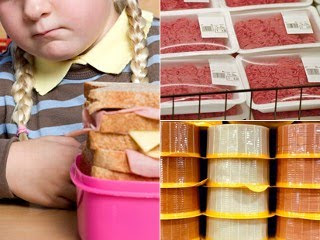 This was reported on Good Morning America this morning. The suggestion is that parents should not be packing their kids' lunchboxes with slices of deli meat, since deli meat is high in sodium and saturated fat.

Alternatives suggested: Peanut butter and jelly on whole wheat. Or how about a sandwich with hummus and avocado? Or perhaps Tofurky?

I don't want to get political here. However, my experiences as a physician have shaped my opinion on this topic.

There are too many uninsured and underinsured in this country. They do not get the care they need for preventing diseases, and they present when it is too late, when their condition is out of control and the cost to treat it is far higher than what it would have cost to prevent the disease in the first place.

The rumors and scare tactics are absurd. One of my patients told me today that he, as an otherwise healthy elderly man in his 80's, with health care reform may not be treated for his hypertension, but instead would get "death counselling". Simply untrue.

The current health care system will bankrupt our country. There needs to be change. The melodrama and scare tactics need to stop and there needs to be intelligent discussion on this topic.
Posted by VeganHeartDoc at 10:14 PM 5 comments:

21-Day Kickstart to a Healthier Diet

Want to eat healthier but don't know where to start?

Have you thought about trying a vegan diet?

If so, then check out the PCRM 21-Day Vegan Kickstart. This looks like a great program!
Posted by VeganHeartDoc at 9:59 PM No comments:

I tell my patients to go exercise most days for at least 30 minutes. But what's to keep you going?

As I practice what I preach to my patients, I exercise just about every day. And there are days when my motivation is lacking. Sometimes when the alarm goes off at 4:30 am, I just want to roll over and go back to sleep. And, were I to be completely honest, every so often that's what I do. But, 99% of the time, I get up and go.

My goals keep me on track. In the next two months, I have two triathlons, and I want to perform my best. If I miss a workout, I fear that may impact how ready I am for my races. 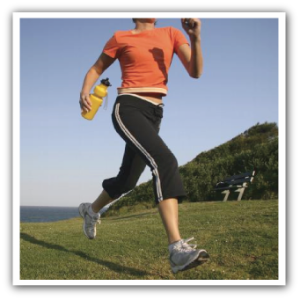 Yesterday morning, on the treadmill at the gym, five miles into an eight mile tempo run, with my heart racing and sweat dripping on the treadmill, I was tired out. I thought, I can end this at six miles.

What kept me going was thinking of my long-term goals -- I want to qualify for the Boston Marathon for 2010. To do that, I need to get faster, and hard workouts like this have made me a faster runner and a better athlete.

Somehow I got a second wind and finished off my 8 miles with a sense of true accomplishment.

Goals are important for keeping us on track. If I didn't have goals for myself, I don't think I'd be able to wake up early and exercise.

A goal can be as simple as wanting to finish a 5K race. Another great goal is having the stamina to keep up with active grandchildren.

Whatever it is, find a reason to get out the door and exercise.
Image from media.photobucket.com
Posted by VeganHeartDoc at 11:53 AM 2 comments: