Something you may have noticed.... I'm smaller.

Back in February, in order to change up my routine with the hopes of becoming a better athlete, I hired personal trainer Corey Enman of Fitamorphosis.  Upon signing on with him, I was measured and weighed.  At 5'10", I weighed 159 lbs, with 24% body fat.  While 24% body fat is a normal body size, it's a bit more than what a competitive female athlete should carry. 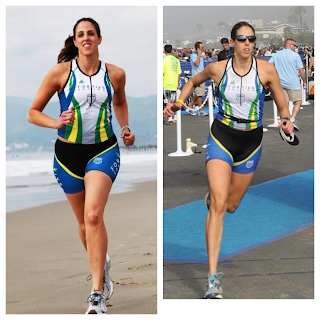 As you well know, the exercise was already there, with the usual  swimming, biking, and running prescribed by Coach Gerardo of Fortius Racing, and two personal-training weight session per week.  But, with Corey, I've changed that up.  A once weekly session with Corey consists of high-intensity body weight and free weight exercises to burn fat and build muscle.  These may consist of running a mile in a 20-lb weighted vest while carrying two ten-pound dumbbells, burpees on a single leg, frog jumps, pushing a tire across a gym floor, amongst other challenging exercises done back-to-back-to-back.  Then, I'll usually add in one day a week of Barry's Boot Camp.  So that is two days of solid high-intensity strength training in addition to my cardio.

However, I would credit a better diet with my results.  I don't deprive myself.  I eat around 2000 calories per day.  Breakfast is a soy latte, oatmeal with fruit, and usually a smoothie or another piece of fruit later in the morning.  Lunch is typically a salad with tofu or tempha (a brown rice protein) and tons of veggies, and sometimes some quinoa and avocado.  Dinner is usually a stir-fry.  Snacks are fruit, or veggies and hummus, or trail mix.  And I've curtailed my nighttime noshing.

Key to the diet is logging all my food into MyFitnessPal, a free application, to keep me accountable, and to allow Corey to know what I'm eating.

Initially, my smaller body size didn't transform into much speed.  But, in the ensuing months, I am faster.  In fact, in the past three weeks, I have set new personal bests at the half marathon (1:48:34), 5k (23:01), and 10k (49:04).  Hopefully, that means that the Carlsbad Marathon in January will also be a personal best. 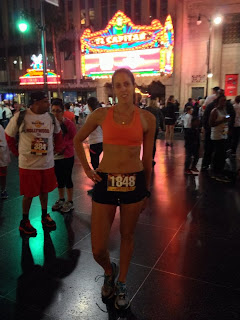 Before the Hard Rock Los Angeles 5K on November 2.

I wouldn't suggest my previous weight was unhealthy -- it was healthy.  But, my lower weight helps me to move faster.

There's no shortcuts to health or speed -- it's hard work.  If you want the support you need to get your fittest and healthiest body, take Corey's FitCamp classes.  Click Here.
Posted by VeganHeartDoc at 10:12 PM 6 comments: