It's been an interesting trip..... 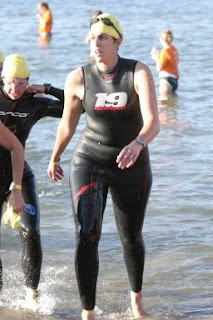 I posted this photo on Facebook, of me doing my first triathlon, the Finger Lakes Sprint Triathlon in September 2005.  It's gotten some interesting reactions, maybe because I look different now.  I am a much better athlete, and have had many new life experiences, compared to when this picture was taken.

I'm racing at the USA Triathlon Age Group Nationals on Saturday in Burlington, Vermont.  If you'd asked me nearly seven years ago, I don't think I would have ever thought this would be possible.

It's been an interesting road since that first race.  After a foot injury had derailed me from running for nearly a year and a half, I took up cycling.  I pulled my decrepit Toys R Us mountain bike out of the back of the garage, walked into the bike shop in upstate New York hoping not to get laughed at.  They were kind enough to get this clunker into riding shape.  I rode with the local womens' cycling group, hauling ass just to keep up with these women, most older than me, but on much nicer road bikes.

Then I started swimming on my own, and then with a local masters' group.  I swam in the slow lane, forced to learn to breathe on both sides.

Eventually, after months in and out of an orthopedic boot, and finally in a pair of orthotics, my injured foot healed and I started to run again.  I ran a local 5k in about 32 minutes. 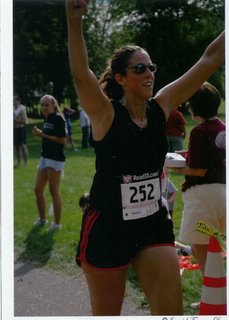 That's me at the end of the 5k.  I was excited to be running again.  But I knew that running with no cross-training was a problem and would lead me to become injured again.

Shortly thereafter, in Mary Eggers' spin class, I asked her -- "Can you coach me to a triathlon?"  She was a local triathlete and coach of Team Train-This! .

I spent that entire summer training for my first triathlon, the Finger Lakes Sprint Triathlon.  I followed her program, which had me training about 7-8 hours per week.  I found it tough to fit in the workouts, but I got most of them done. 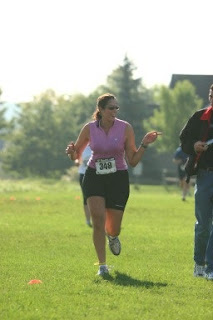 And there I am, finishing Finger Lakes Tri.  I wasn't last, but I was far from first.

I had so much fun racing that day that I wanted to do even more triathlons!  But I decided I wanted to do them well.  Circumstances in my life were difficult around that time.  A few months after that first triathlon, I went through a divorce.  It was about as amicable as something like that can be, but when you lose someone that important in your life, it leaves a hole.

I filled that emptiness by striving to be a stronger athlete.  During the winter in icy Rochester, NY, I would get on my treadmill in my bedroom and do "Soccer Workouts".  To this day, I don't know why that is their name, but they are mile repeats at progressively faster paces.  When I finally broke a ten minute mile, I rejoyced!  I continued to swim, bike, and run, planning on races that spring in Rochester and then for the upcoming summer and fall as I plotted my uncertain future alone in Boston, where I would be moving for my interventional cardiology fellowship.

I achieved a long-time goal that spring, to run a 5k faster than 29 minutes.

I moved to Los Angeles a year later to begin my career as an interventional cardiologist.  Triathlon has continued to be a big part of my life -- it's been my hobby, a way to meet great friends, and a terrific outlet for stress.  Through hard work and excellent coaches, currently Gerardo Barrios of Fortius Racing Team, I've continued to become a stronger athlete.

In the meantime, I've achieved and surpassed several goals that I've set for myself -- finished an Ironman, gotten my marathon time down to 4:05, ran several 5k's in under 25 minutes, and many others.

This weekend's race is much the culmination of all of that.  While I won't be winning any medals this weekend, or qualifying for Team USA for the ITU Worlds race, I can celebrate all my hard work, and I'll be happy and honored to be able to race amongst such talented athletes.

Posted by VeganHeartDoc at 9:14 PM 5 comments: