I hate excuses.  It's always easier to find a reason not to make the right choice than it is to go to the effort to make healthy choices.  Such as, when patients tell me they haven't exercised in a month because it's too hot, it's too cold, it rained.... it's Southern California, give me a break!

But, when it comes to making good food choices, I often hear from patients that they live alone, so it's too hard to shop for one, keep food from going bad, and take the time to prepare a meal.  So, instead, they resort to fast food, restaurants and prepared meals, which nutritionally are poorer quality than most of what you might otherwise prepare in your kitchen.

I can debunk the living alone excuse quite easily, because for most of the past ten years, other than my adorable greyhound companions, I've lived alone.  I prepare most of my meals at home, and it's not that hard to do.

Shopping
I buy much of my produce at the Sherman Oaks Farmers Market on Tuesday evenings.  It's a stop on my way home from work.  For other food, I'll usually shop once a week.  I'll pick up the basics at Trader Joe's, because they offer good prices and plenty of organic options.  I buy a few things in bulk at Costco like organic baby carrots, And, because I can walk down the street to Whole Foods, I pick up odds and ends from there.

Food Prep
Often, I'll spend a weekend morning, or an evening, preparing some staples, so that it's easier during the week.

I love my steaming baskets.  I'll put them on top of a pan of simmering water, add vegetables, and cover with a lid to keep the steam in.  Here I cut up some red peppers.  After these cooked for about ten minutes, I then steamed some purple cabbage and baby carrots. 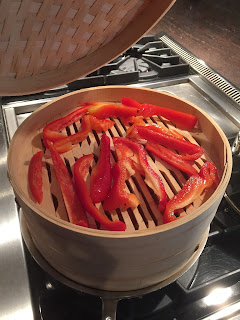 I like to have a grain on hand as well.  Often it will be quinoa or brown rice, but today I decided on Trader Joe's Harvest Grains Blend with Israeli couscous. 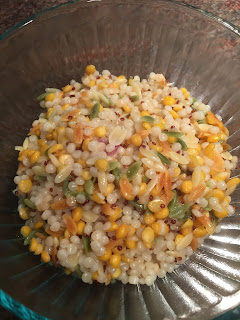 I like to roast a few items in the oven as well.  Today I roasted brussel sprouts in oil, Braggs Organic Sea Kelp Delight, and some sea salt.  I put a couple of large Japanese sweet potatoes in the oven.  And, I roasted a butternut squash, which I'm probably going to turn into a soup by spinning it in my Vitamix with some veggie broth. 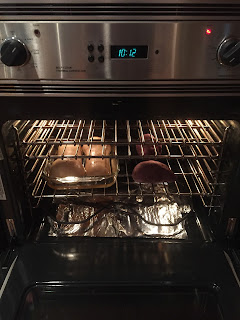 After I finished cooking and chopping up some herbs and cucumbers, I put it all in the fridge. 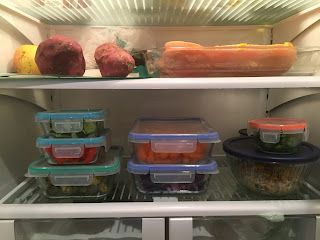 What I Eat
I do not spend a long time preparing meals.  I grab a few items from the fridge and usually put them in a bowl.  I try to keep my meals half vegetable, one quarter grain, and one quarter protein (beans, lentils, cut up tofu, etc).

And, I may have the same thing a few days in a row, because honestly it's easier.  For example, recently I bulk cooked quinoa.  I put some in my salad for dinner, and the next morning, instead of making oatmeal, I put some quinoa in a bowl, added soy milk, frozen mango and berries, and chia seeds, and microwaved it for a delicious hot breakfast bowl. 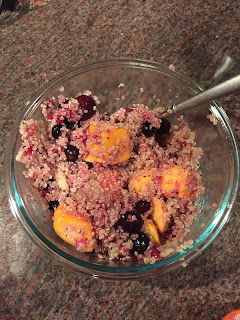 Eating well when you live alone isn't that hard -- it just takes a bit of planning.


Posted by VeganHeartDoc at 5:49 PM 7 comments: