I don't think that cheese is vegan....

We ordered pizza for a special occasion from a local pizza place.  The restaurant is not all vegan, but they do pride themselves on providing vegan options.  And, I've had their pizza before, and it's been pretty good.

(Yes I'm a cardiologist, and no I don't eat pizza all too often.  This was a special occasion.)

There were several pizzas with the order, and only one that was ordered as vegan, as I was the only vegan among the group.  Someone had even gone to the effort to write "vegan" on the box, so I didn't think twice when I helped myself to a slice.

Something seemed odd about the pizza, a taste and a consistency that was unfamiliar.  As I continued to eat, I noticed the consistency of the cheese didn't seem like that of the Daiya non-dairy cheese that I'm accustomed to on pizza, and I began to suspect that this might have been dairy.  Rather than say anything, I stopped eating the pizza and helped myself to some salad.

About 30 minutes later, my stomach felt quite upset, and without providing graphic detail, it became clear that all was not well. 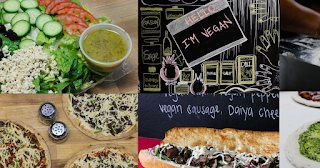 From the website of Cruzer, the only all-vegan pizzeria in Los Angeles.  I wish they were closer to where I live.

Maybe I'm just imagining things... and it really was vegan cheese?  So, I brought the leftover pizza home that evening to my lactose-intolerant boyfriend and showed it to him without saying anything.  His response:  "That looks like dairy cheese."

I called the restaurant, and the owner was the one who picked up.  I explained that I think that a vegan pizza that we ordered probably was made with dairy cheese.  She was skeptical, explained that they cater to the vegan community and that would not happen.  I said, "I'm about 99% sure this is dairy."  She asked me to take a photo and send it to her cell phone.

Upon sending the picture, I received a call back almost immediately.  As it turned out, our order came in at the same time as an order that included a vegetable pizza with dairy cheese.  The group that had ordered the vegetable pizza had called earlier, upset about the "funny" cheese on their pizza.  It looks like the pizzas from the two orders had gotten mixed up.

The owner sounded beside herself.  She was very apologetic, wanted to know what she could do to make it up to me.  I said I understood, it was an honest mistake, and the next time we visit, a pizza on the house would be great.

Now, I could see someone getting far more upset over this.  One could have posted a nasty one-star review to Yelp, or a long-winded social media post naming the restaurant and suggesting that vegans should boycott.

I don't think that would be a good way to deal with this.  Even though the restaurant isn't all vegan, they do have many vegan choices, and as a result I want their business to do well for making the choice to provide vegan pizza.  Further, it does no one any good for vegans to come off as mean and self-righteous.  While I probably won't order from this restaurant again any time soon, I do want them to continue to have vegan offerings and view the vegan community positively.

What would you have done?
Posted by VeganHeartDoc at 7:57 PM 3 comments: