We're supposed to prioritize our races.

"A" races are the ones we really train for, that we want to do well at.

"B" races are ones we want to do well at, but know that these aren't our top priority.

"C" races are the ones where we know we're not going to do great, and we race for the experience.

I raced at the He Tried She Tried olympic distance triathlon.  It's a neat concept -- you are paired up with another person to race, and based on your combined ages and race times, this determines your award for the race.

Did I mention this race is in Michigan?  I thought it would be fun to do a race while visiting my parents.  And I was so grateful to have my parents cheering me on.  They hadn't been at any of my races since Ironman Lake Placid in 2010, where my Dad was convinced that every passing ambulance had me in the back of it.

I was jetlagged, having arrived in Michigan from California at 3 am just two days earlier.  I never quite got onto Michigan time and only had 4 hours of sleep the night before the race.  Since I didn't travel with my bike, I borrowed a bike.  It was a tri bike and the right size frame, and I am so grateful for being able to use it, but it is a lot heavier than Mr. Cervelo, my trusty grey speedy machine. 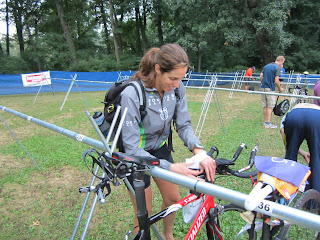 I think the swim went okay.  We swam in a nice warm inland lake that was 82 degrees, so no wetsuit was needed.  I practiced drafting and found a guy whose hip I drafted off of for the first quarter of the race.  It's a skill that my team has been working on in our open-water simulated practices.  An olympic distance race swim is supposed to be 0.9 miles -- this one was significantly longer, well over a mile, but that's ok. 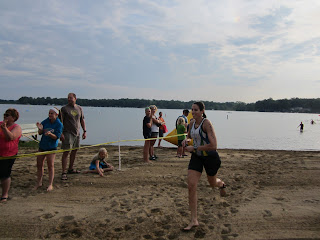 I anticipated a really bad bike ride.  And, it was a tougher ride, with a heavier bike, that wasn't fit to me.  But somehow I averaged 17.5 miles per hour, which is only a mile per hour slower than I usually ride.

Unfortunately, on the run, I could feel my very tired legs.  The run had a lot of hills and some trails at the end. My 10k time was an hour and two minutes.  WHAT?!?!?!  Keep in mind I did the 10k run at San Diego ITU just a few months earlier in just over 51 minutes.  My legs were so heavy, and no matter how hard I tried, I just couldn't get them to go faster. 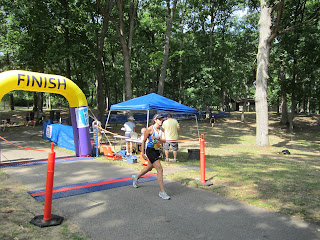 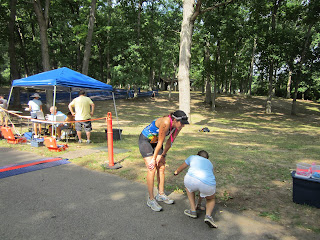 My finishing time was terrible. 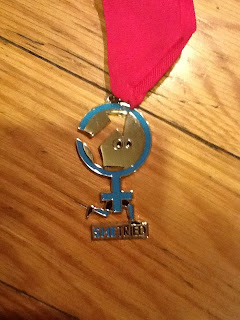 Interestingly, though, my partner, who I met on race day, and I managed to place first out of three female teams with combined ages of 80-89.  I guess that's a cool accomplishment.

I think there's something to be learned even from the worst races.   I don't travel this far to most races, and now I know for USAT Age Group Nationals in Burlington, Vermont next month that I need to get my rest and get used to the time zone.  I'm also glad that I decided to have my own bike transported to Vermont and not try to ride someone else's bike.

On another note, I really think Epic Races did an amazing job with this race.  It was so organized at registration, the course was incredibly well marked with volunteers at all of the important points, and aid stations on the run were well stocked with water, electrolyte solution (even though I think Heed tastes horrible), and Hammer gels.  And, at the end of the race, the selection of food was fabulous -- bagels, hummus (mmm I love hummus!), watermelon, pineapple, oranges, and cookies.  The finishing medal was pretty cool too.
Posted by VeganHeartDoc at 9:04 PM 1 comment:

This dinner took me less than ten minutes to put together.

Below is a squash salad, with zucchini and yellow squash grown in my garden, red pepper, tofu, and sweet and sour carrot sauce from Bolani that I bought at the farmers market today. 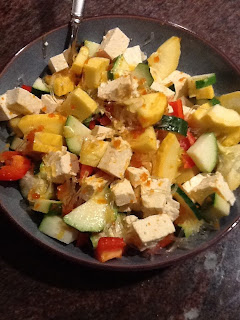 Then I made a lentil soup.  In the blender, I added veggie broth, lentils, a few leaves of kale, two tomatoes, and a couple leaves of basil.  I pressed the "Hot Soup" button, let the Vitamix work for about three minutes, and then I had soup! 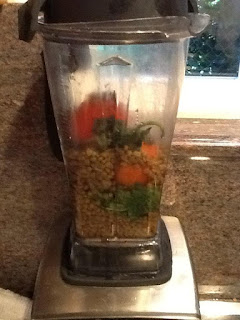 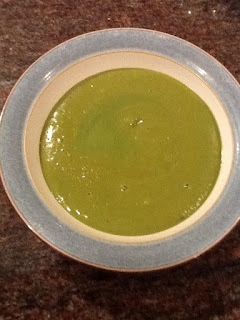 I had a half of a sweet potato with this, and a peach for dessert, both from the farmers market.
Posted by VeganHeartDoc at 9:26 PM 1 comment:

But, life as a multisport athlete has been exciting.  I just found out that I made the US Womens Masters Triathlon Team for the Maccabiah Games in Israel in 2013.  It's one of those things I would not have imagined happening when I did my first triathlon seven years ago. 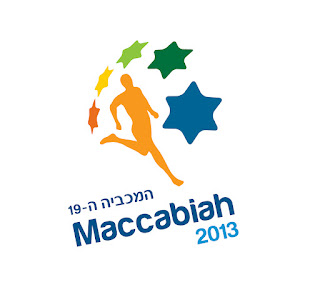 I have two races this month, a sprint and then an olympic distance race.  But, my big races are in August -- USAT Age Group Nationals in Burlington, Vermont, followed by Bulldog 50K, my first ultra-marathon.

My next blog post will be of substance, I promise.  Here's a few topics I'm mulling:
-Is endurance sport training bad for the heart?  Oooh there's lots of good stuff here...
-I signed up for a 50 mile trail run.  Am I out of my mind?
-Or, what do you want to hear about?
Posted by VeganHeartDoc at 10:57 PM 6 comments: