I could talk your ear off about how tasty a healthy vegan meal can be.  Or I can just feed you fabulous food.  Yesterday, I threw a backyard BBQ.  Here's what I served up: 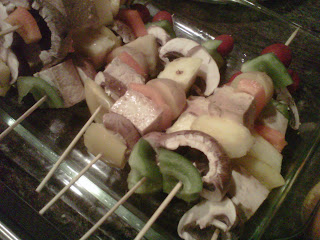 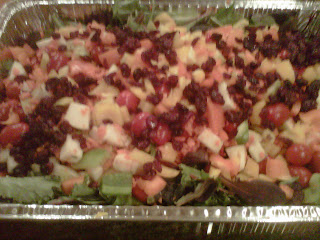 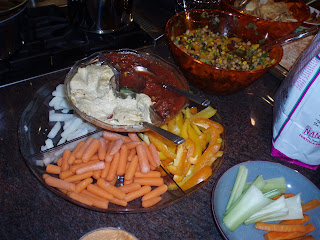 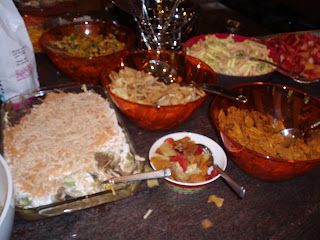 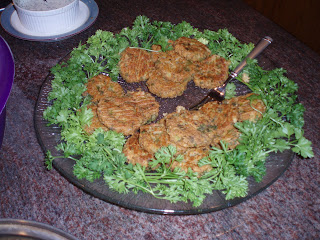 "Crab cakes" made by Lisa K., from tempeh and some other ingredients, baked not fried.  Yum! 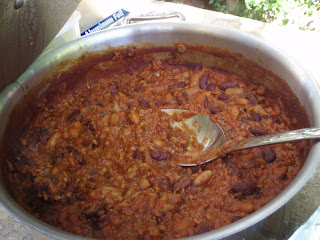 Mom's chili -- made from a mix by Fantastic Foods, but with a few variations, including canellini beans and Muir Glen fire-roasted tomatoes.﻿ 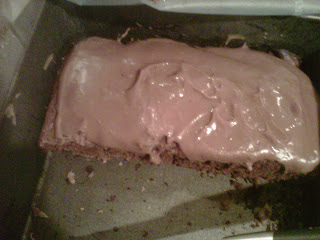 And, you can't forget dessert!!!  Chocolate brownies with chocolate frosting, and carrot cake.
Posted by VeganHeartDoc at 9:33 PM 5 comments:

If you have new chest pain, see your doctor.  That's the most important thing I'm going to write today.  Plain and simple.

Some people are embarrassed that they're making a big deal out of nothing.  And to be honest, less than half of the new patients that I see with chest pain actually have pain due to heart disease.  But, I have encountered a man in his mid 30's who attributed the pain in his chest that he got whenever he exercised to "gerd", or reflux.  At 37 years old, he had a heart attack and underwent emergent bypass surgery.

Many things cause chest pain, other than heart disease -- a pulled muscle, inflammation of the cartilage of the ribs, esophageal reflux, esophageal spasm, anxiety, depression, injury, amongst other possible causes.  But do not wait -- get it checked out.  See your primary care doctor, and if needed, come see me or another cardiologist for an evaulation.
Posted by VeganHeartDoc at 7:21 AM 6 comments:

This is so easy, and so healthy! 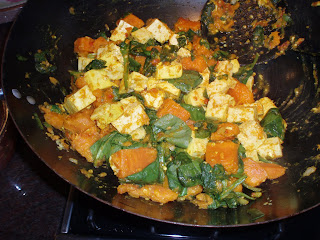 Microwave a sweet potato until soft, allow to cool, remove the skin, and cut into cubes.  Combine in a wok: Cubes of extra firm tofu, sweet potato, spinach leaves, salsa, turmeric, garlic, and either a splash of soy sauce or Bragg's liquid amino acids.  Cook for about ten minutes and serve.
Posted by VeganHeartDoc at 9:48 PM No comments:

I eat healthy, and so do a lot of people.  Not everyone else in this world does.  But I realize I need to be able to roll with the punches in life, so to speak.

Last week, I attended a cardiology educational meeting at Arnie Morton's steak house. Now, I won't even start on the irony of learning to treat coronary disease in the setting of a steak house. I do realize, though, that every so often we end up by social necessity eating at a restaurant that we would not typically choose on our own.

As you might imagine, Morton's doesn't have a tofu stir-fry or lentil loaf on the menu. However, I spoke with our server Heather (fabulous first name, no?) and asked her what the chef could prepare. I ended up with the chopped salad with no bacon, eggs, or cheese, and with a mustard dressing, and for my entree a plate of steamed vegetables, a baked potato, and a side of soy sauce: 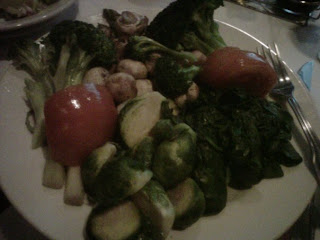 I must say, the steamed veggies were quite delicous.  It was a huge plate and I didn't finish everything, but I did polish off all the spinach, broccoli, tomatoes, mushrooms, and about half of the asparagus and brussel sprouts.

Would I have enjoyed a more interesting dinner, perhaps with a protein, just like my colleagues enjoying their steak or fish?  Sure.  But, I think that as a vegan, it's important to go to restaurants that don't solely cater to non-meat-eaters.  If they have enough of us as customers, perhaps one day they'll put something on the menu for us.

The most important point:  You can get a good healthy meal at just about any nice restaurant.  You are the customer.  Just ask.
Posted by VeganHeartDoc at 10:18 AM 5 comments:

Wildflower 2011 -- A Tough Day for a Personal Best

Wildflower is a favorite race of mine -- the second toughest half-Ironman distance course in North America (1.2 mile swim, 56 mile bike, 13.1 mile run).  The course is infamous for its hilly bike and challenging trail run.  Wildflower is also known for its camping experience.

I've raced Wildflower previous years, and I've camped out in my tent, shivering and miserable, barely getting any sleep.  That has made racing even more challenging, and particularly led to a less than stellar race for me last year.  I vowed that if I ever came back to race that I would not be camping.

When a couple of friends  invited me to join them in renting a house, I decided that I wanted to give Wildflower Long Course another shot.  And, with eight hours of good sleep and weeks of hard training, I was ready on race morning.

Swim
The beginning of the swim was more crowded than I had remembered.  Perhaps it felt crowded because I haven't been in open water since September.... oops :)  But, after rounding the first buoy, the crowd dispersed and I settled into my stroke.  Halfway through the swim, I felt waves.  I could see a Sheriff's boat circling, and a couple boats next to them.  I have enough open water experience that even though I was expending some extra energy, I had no trouble getting through them.  I could see a couple of women around me who had started the race before I did and I could tell they were having a tough time with the choppiness of the water.

As I swam, I noticed one of my old bad habits -- I use the swim caps in front of me to determine which way to swim, as opposed to sighting off of a landmark like a buoy.  If I ever become a swimming frontrunner in a race, I will be in big trouble.  But that likely won't ever happen.

Bike
The Wildflower bike course presents challenges of its own.  Coming straight out of the transition area, riders head straight up Beach Hill.  That's me beginning the climb: 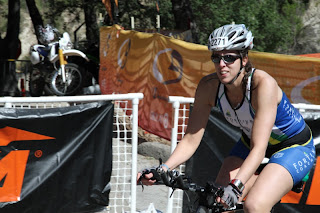 Beach Hill is steep and it's nearly 2 miles long.  It would be easy to stand on the bike, grind out the hill, and trash my legs, but then again there are 54 more miles to ride. After that are some rollers. Lots of people pass me. I'm used to that -- the bike is my weakness. Then the road flattens out.  And then we picked up a really strong headwind.  I'm pedaling hard and I feel like I'm barely moving, but my bike computer tells me I'm only moving at 10 miles per hour!  So of course I'm thinking, what's wrong with me, but as I think about it more, no one is passing me, so it must be the wind.

After 8 or so miles of miserable headwind, we turn right onto Jolon Road, where the headwind becomes a side wind (is that the term for it?  I don't know, but I think you understand what I'm saying).  The wind is blowing me to the right, and at times I have trouble staying upright on my bike.  And finally, the wind seems to settle down just as we reach the infamous Nasty Grade hill at mile 42.  I felt okay, and after weeks of hill riding, I sailed up the hill, passing at least 20 riders, and not a single one passing me.

Run
After that grueling ride, we now get to run 13.1 miles of trails.  The first six miles are the toughest, with plenty of steep hills.  A lot of people walk at this point, but I ran up all of them except for three particularly steep hills that I power-walked.  The balls of my feet were absolutely burning -- if I stepped on a rock, they would hurt even more.  But, as I kept running, the pain got to be bearable.

After the trails, we run through the campground, with plenty of cheering.  And that's about where this picture was taken: 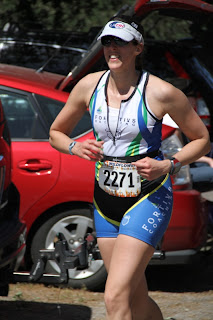 Next was an out-and back uphill and down, and then back up and down again, and a small hill and then a long descent of about half a mile into the finish.