The instructor of the Restorative Yoga class that I attend gave an interesting tip.  She has white coat hypertension.  She comes to her doctors' appointments early and will meditate in the waiting room.  This way, by the time she is called back to see the doctor, she is relaxed, and when she does this she typically will have a normal blood pressure.

When she told the story initially, she relayed it as if a doctor wouldn't like that she does this.  I think it's a terrific idea, and so I'm sharing it!
Posted by VeganHeartDoc at 9:34 PM No comments:

I didn't have any race plans for this weekend, until Coach Gerardo suggested the Mount Baldy Run to the Top race.  Five of us from Fortius Racing Team took on the challenge.

At 10,068 feet, Mount Baldy is the tallest point in Los Angeles County.  During the winter, while the ground may be clear in the valley and the city, you can see snow-capped Mount Baldy from far away. 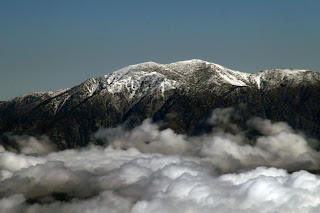 I climbed this today.  Picture from wikipedia.com

I hadn't planned to enter this race.  So my approach was conservative.  I thought I'd walk/run it.  I ran the first half mile downhill, but held back because I had an idea of what was ahead.  Then I ran the next half of a mile.  Then, as the hill became steeper, running just wasn't a possibility, so I was briskly walking, with an occasional very short jog. 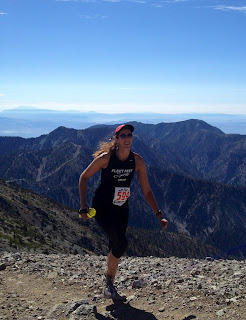 Photo courtesy of Gerardo Barrios
Then around mile 4, it got steeper.  Then around mile 5 we were on single track.  And it got steeper.  My brisk walk became more of a mountain climb.  My calves ached.  My hamstrings were sore.  And with a mile to go, at nearly 10,000 feet of elevation, I felt stuporous at best, lightheaded and just trying to get one foot in front of the other.

I made it to the top in 2 hours and 14 minutes.  That must be the slowest 7 miles ever, but one of the most challenging feats I've ever accomplished.

After all that climbing, we had to descend 3.5 miles to get to the ski lift to get back to the bottom of the mountain.  Coming down may have been just as tough as climbing, because it was a challenge just to maintain our footing and not slip on all the rocks!

This was a tough challenge, and I'm glad I took this on.  However, I know tomorrow I'm going to be very sore.
Posted by VeganHeartDoc at 8:24 PM No comments: