I have a new toy: a Crock Pot.

They're amazing! Basically, you add a bunch of ingredients, turn it on, go to work, and magically hours later you have a healthy, tasty meal! 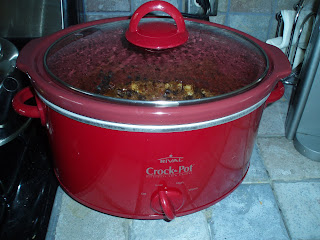 I made chili by mixing tomato sauce, black beans, chick peas, and vegan burger crumbles, and setting the Crock Pot at low for eight hours. Another day, I added some frozen vegetables to a bottle of pasta sauce and cooked for four hours. The veggies added great flavor to the sauce. 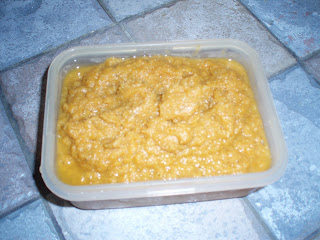 This is my most recent creation. Two cans of chick peas, one pound of baby carrots, onion, veggie broth, salt, pepper, thyme, rosemary, and oregano, mixed up in the crock pot, cooked on low for seven hours. Then the mixture was poured into the food processor and voila! A healthy side dish with veggies (carrot) and protein (chick peas).
Posted by VeganHeartDoc at 10:16 PM

That garbanzo bean stuff sounds like it would make a good sandwich filling with some lettuce and onions.

You took dry, completely uncooked black beans & chichkpeas, & added no liquid except the tomato sauce, and at the end of eight hours you had chili? Or did you use canned beans? -victoria

I love my Crockpot for vegan cooking, and have found that "Fresh From The Vegetarian Slowcooker" is a great source of recipes. Most of the recipes are vegan, and those that aren't only call for milk or soymilk, so it is great.

I love reading your blog, btw! It is great hearing from a doctor who is vegan and healthy.

Our family loves the crock pot, and loves how many different things you can make in it. My wife, Sherrill, has begun combining our recipes together on her new website. http://crockpotmagic.com