It all started in Upstate New York...

Five years ago, I was a cardiology fellow-in-training and a repeatedly injured recreational runner.  To stay in shape, I dusted off my clumsy mountain bike that I bought in 1992 at Toys R Us before heading to college.  I also did spin classes and I swam.

My spin class instructor, Mary Eggers, was a triathlon coach.  One day, once I could finally start to run again, I asked her if she thought I could do a triathlon.

I spent the entire summer of 2005 training under Coach Mary's guidance for a sprint triathlon.  Then in September 2005, I completed my first triathlon, the Finger Lakes Triathlon.  I had a blast that day.  And, from there on out, I was hooked.

In the past five years, I moved to Boston and then to Los Angeles.  My world has changed more than I could have ever imagined -- new jobs, new people, new homes.  But, triathlon training has stayed constant.  It has been my link to meeting some amazing friends.  It has been my stress relief.  And it has been my source of strength when I have had tough days, to go pound the pavement for a run or jump in the water for a few laps to sort out my thoughts or to escape. 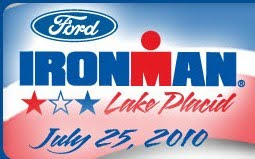 This week, I will be returning to upstate New York, to Lake Placid, for my first Ironman distance triathlon.  That's a 2.4 mile swim, 112 mile bike, and 26.2 mile run.  140.6 miles in one day.  I'll get to see Coach Mary who hooked me on this sport.  And, I'll have the chance to complete my biggest physicial challenge yet:  The Ironman.
Posted by VeganHeartDoc at 9:05 PM

Good luck! I'll be looking for the race report!

Good luck! As a sprint distance only triathlete, I am in awe!

I am so excited for you Heather!

Nice! Now I know what to do, thank you! And as this information is educational so this site has been added to my RSS feed for later browsing. To know more about
marathon training visit: http://www.marathontrainingschedule.net
[ running training program ]
[ how to run a marathon]