Weather has not seemed to want to cooperate with my race schedule.  First, Hurricane Sandy led to the eventual cancellation of the New York City Marathon.  Now, days of heavy rain are causing havoc on the North Face Endurance Challenge course, leading to last minute course changes and muddy trails.

I registered for the North Face Endurance Challenge months ago.  I planned to do the 50K race, about 31 miles of trails with 6800 feet or so of climbing, tomorrow.

Then I saw the weather forecast: 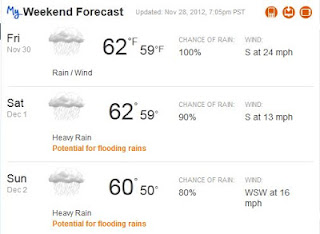 Now, I've run in rain.  I finished the 2011 Los Angeles Marathon, during which there were torrential downpours from just after the start, intensifying throughout the race to what could be considered monsoon conditions.  In spite of the weather, I had a pretty good race.  Two weeks ago, I ran four hours in the Santa Monica Mountains, slip-sliding in mud at times, covering nearly 19 miles.

This will be my first ultramarathon.  I will be out on the trails for over six hours.  I don't want to be miserable, cold, and wet.  And, I don't want to risk my safety and health running on a muddy and presumably slippery course.

So, I'm out -- I'm not running North Face.  Several of my teammates will be there, and I hope they have a good and safe race.

BUT, there's another ultramarathon this weekend!!!!  Ridgecrest 50k.  It seems like a low-key race. It's known as the friendliest ultramarathon.  I'm not sure what that means.  There are aid stations about every three miles.   The high will be 66 degrees with a 30% chance of rain.  And, while North Face 50k has about 6800 feet of climbing (though they are being forced to change their course due to the weather so it will be less), this race has less than half that amount, about 2,664 feet.

I'm looking forward to my first ultramarathon on Sunday, hopefully in sunny weather!
Posted by VeganHeartDoc at 12:42 PM