The Veganification of Fast Food 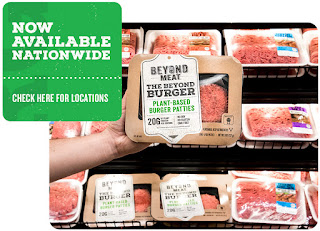 Vegan options now abound at fast food restaurants:
Carl's Jr now carries the Beyond Burger.  But, be sure that when you order your "Beyond Famous Star" that you hold the mayo and the cheese.  I've been amused by the social media posts of various vegan friends who have never stepped foot in a Carl's Jr but suddenly have the urge.  I've heard good reviews.
Del Taco now makes Beyond Tacos with Beyond Meat.  They're only available at select locations for now.  My father is a connoisseur of Del Taco and eagerly awaits the arrival of the Beyond Taco in the Conejo Valley.
Taco Bell is rolling out a vegetarian menu.  It's been well known for years amongst the vegan community that Taco Bell is an easy place to eat vegan -- just sub the beans for meat in any item, ask for it "Fresca style" which means you get a salsa-type topping instead of cheese, and you have a vegan meal!

In addition, Chipotle has beans that are vegan, both black beans and pinto beans, much thanks to a class-action lawsuit, along with Sofritas which is a marinated spicy tofu blend.  Subway offers a Veggie Delite sub with veggies and Italian dressing which is vegan.  Many pizzerias, even chains like Blaze Pizza or Pieology, offer vegan cheese as an option.  Just about every restaurant has a vegan option on the menu, and if there isn't something obviously vegan then there's likely something that can easily be made vegan.

That makes it easier to find food options when we're dining out..... but it won't necessarily make use healthier.  Meat and cheese aren't health foods, but neither are the vegan analogues of meat and cheese.

I'm not a purist when it comes to diet -- I advocate whole, plant-based foods for my patients, and for the most part that's how I eat.  But, I do go out for a restaurant meal, usually once or twice on the weekend, and I expect that many people like me will enjoy an occasional restaurant meal.

I worry that there will be a new generation of fast-food vegans, those who eat vegan for the sake of the animals, but don't necessarily think much about their health.  These fast-food vegans may down the road end up with the same health issues that we associate with a meat-laden diet.  And then, people will look at us vegans and say, oh your diet isn't so healthy after all, now is it?  When the perception of vegan is not a healthy one, then fewer people will gravitate to a vegan or plant-based diet, and the animals will suffer.

In the meantime, I'm looking forward to trying out a vegan Carl's Jr "Beyond Meat Star" since I'm curious.


Posted by VeganHeartDoc at 7:13 PM