Racing and Training... the beat goes on

My legs hate me.

They're tired.  They're wiped out from yesterday's training ride of 125 miles on PCH from Santa Monica to Ventura and back.  And they were mad that I made them work again today at the Redondo Beach Triathlon.

I wanted to do a race before Ironman Lake Placid.  So, I chose the Redondo Beach Triathlon and I raced it as an Athena, which is the category for women over 150 lbs.  While I'm a normal weight for my height, I'm a tall girl, and just a hair over that weight.  These long legs are no advantage on a bike, so I feel justified in racing that category.

The race was a half mile swim, 6 mile bike, and 2 mile run.  That relatively long swim compared to the bike and run put me at a disadvantage since I'm not a great swimmer.

As we started, I saw one Athena girl take off into the water and I never saw her again.  While she finished the swim five minutes faster than me, overall her time was only 50 seconds faster.  My swim was definitely more tired than usual after yesterday's 125-mile bike adventure.

The bike portion was an out-and-back two loop course.  My legs were absolutely screaming at me with soreness.  But, I pushed on through.  The mostly flat course of two three-mile loops was crowded initially but then thinned out.

Then there was the run, always my favorite part in a race, because it's where I'm strongest.  And, surprisingly, my legs felt good to run.  Since we Athenas started in the last wave, there were plenty of people ahead.  I passed at least thirty people over the course of two miles and not a single person passed me.

I landed on the podium -- second place Athena!  Had I raced my age group, I would have done well too at seventh out of seventeen. 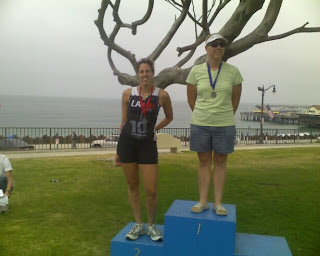 Horrible picture.  Nonetheless, it's me on the podium, which is pretty cool.

Tomorrow will be a well deserved rest day.  But after this, I have two more Build weeks, a recovery week, and then a Peak week prior to my taper for IM Lake Placid on July 25.
Posted by VeganHeartDoc at 5:36 PM

Go you! I just ran my first ever race yesterday (a 10k, which seems like nothing compared to what you do!) but, I still felt rather accomplished. I lost 40lbs in the last 6 months and have been training for this moment. 3 months ago I couldn't even run half a mile, and yesterday I ran 6. Go me! I hope you do well at Iron Man, how cool that you even get to go!

As another tall girl (6'1") I know what you mean about the weight being a disadvantage. Those skinny, short girls just seem to zip around like they weigh nothing.

Also, thanks for being an ongoing source of vegan inspiration. It is nice to read that intelligent, critically-minded people are also making the choice to live vegan.

Hi there! I just wanted you to know that I think your blog is excellent and it's so refreshing to hear about your training/racing experiences as a vegan!

Also, your takes on health and nutrition are always interesting to read.

My question is if you have any take, or have any resources on the soy-cancer controversies?

Congratulations on your race- and good luck at Lake Placid!

Who puts the podium in front of a tree like that? It looks like the tree is growing out of your backs. Weird. Congratulations, nonetheless.

I need to run and swim more. And watch my diet, too!
You look good on the podium. Congrats!