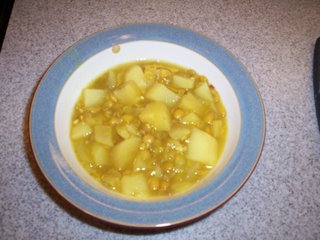 A month or so ago when I was raving about Starport Foods' Garlic Sesame Glaze, I e-mailed the company to tell them how much I love the stuff. I expected maybe some corporate form letter response, but instead I got a personal e-mail from Cheryl Tsang, the Vice President of Sales and Marketing for Starport Foods!

She tells me that not only is she a vegan, but all Starport Foods products are vegan as well! In addition, she sent me a recipe for Curried Lentils, and I *finally* got around to making it tonight. This lentil curry, which uses their Coconut Curry Sauce, turned out awesome! I followed the recipe below, with the exception of the Thai chili pepper (because I'm a big wuss when it comes to hot stuff) and I didn't blend the liquid at the end (because I'm too lazy to wash my blender):

Cheryl says: "Saute all of the items (except the sauce and water) in a pan that has a lid for 3 min. Add Coconut Curry Sauce and water, bring to a boil, cover and reduce heat to low and cook for 20 min. After cooking time, I removed 1 cup of mixture and blended it, then returned it to the pot as a thickener. My lunch guest ate her curried lentils over rice. I had mine in a bowl, like soup."

Awesome. Thanks Cheryl!
Posted by VeganHeartDoc at 7:04 PM